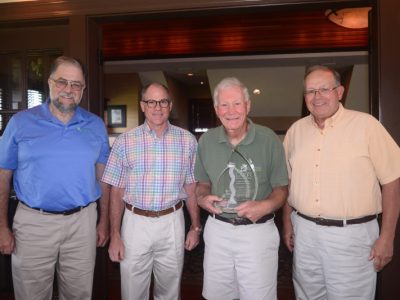 Concord, N.H., August 10, 2017 – John B. Wilson of Pleasant Lake in New London was awarded the 2017 John F. Morten Award for Exemplary Lake Stewardship. In an announcement made yesterday, Tom O’Brien, President of the New Hampshire Lakes Association (NH LAKES) and Board member’s from both NH LAKES and the Pleasant Lake Protective Association, gathered in New London to present the award to John Wilson – Mr. Pleasant Lake.

In September 2002, a special award was created in honor of the late John F. Morten (1914-1989), in recognition of his lifelong work to protect New Hampshire’s lakes and ponds. It was his vision and grassroots efforts that helped create the Lakes Region Federation, which later became the New Hampshire Lakes Association upon its merger with the New Hampshire Lakes Legislative Coalition. It was John Morten who saw the value of a statewide umbrella organization to represent lake interests with both the legislature and state agencies. Each year, NH LAKES make this selection from a group of dedicated lake stewards from lakes throughout New Hampshire. “To win this award,” said NH LAKES board chair, Stu Lord, “your work has to meet the highest standard and John Wilson’s commitment and actions on behalf of Pleasant Lake, and all the lakes in New Hampshire, was above the rest of that of a very worthy group of  nominees.”

Tom O’Brien, President of NH LAKES, describes John Wilson’s service in the protection of the lakes of New Hampshire this way: “John Wilson served on the NH LAKES board for three years, 2011-2014, during which time he chaired our Public Policy and Advocacy Committee. In that role, he was the citizen champion of Senate Bill 89, designed to protect loons throughout New Hampshire from the lethal effects of lead fishing tackle. John’s work on that bill was key to its passage and today our loons are even more protected than they were from lead fishing jigs and sinkers. In addition to his work on that bill, John has continued to be a member of our Public Policy and Advocacy Committee and works tirelessly and effectively to safeguard the laws that protect the quality of our 1,000 lakes. John Wilson’s year-round dedication to Pleasant Lake, his work with the Pleasant Lake Protection Association, his board and committee service to NH LAKES, and his role in protecting all of the lakes of New Hampshire, made him our very best choice for the 2017 Morten Award for Exemplary Lake Stewardship from an impressive group of dedicated volunteers also nominated for the award.”

NH LAKES is the only statewide, member-supported nonprofit organization working to inspire the responsible care and use of all New Hampshire’s lakes to keep them healthy for the benefit of current and future generations. For more information, visit www.nhlakes.org, email info@nhlakes.org, or call 603.226.0299.