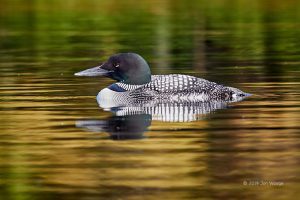 A sleepy loon following a night of calling and searching for its chick.

GOOD NEWS!
We found sleepy parents and only one chick on our Monday morning check. Your response to the sad newsletter we sent out that morning requesting information about loon activity for June 22-23 was amazing and extremely helpful. There is nothing more comforting in stressful times than the emotional support and help from our Pleasant Lake community. As a result, we know the entire loon family was intact around 7:30 PM on Sunday. We also know there were many calls by the adults during the night. All this was consistent with the parents reaction to a predation event. Later in the day, we learned that predation was not the cause of the ruckus.

BETTER NEWS:
Later on Monday, neighbors on Lakeshore Drive spotted a lone loon chick on the lake! They contacted John Wilson and were able to catch the chick and keep it safe and warm. We also, coincidentally, had a visit from Brian Long, an LPC field crew member, who had just spotted the parents and remaining chick near the area where the lone chick was found. He, John Wilson, Jen and I met there to try a reintroduction of the chick to its family. 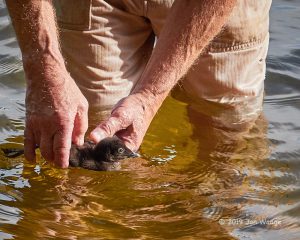 John Wilson released the lost chick with the parents and other chick nearby. The family responded to its peeps and loudly approached. 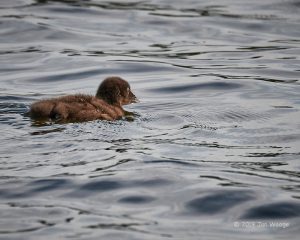 It took John a while to coax the little chick towards the others, but it eventually swam their way.

SAD NEWS:
Although the parents responded to the released chick’s call and approached; so did the other chick. What follows is not pretty but not all that unusual. 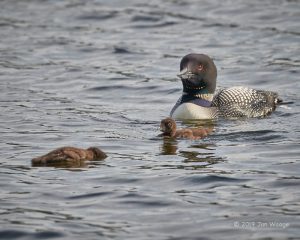 As the chick approached, its sibling swam toward it. At this point, the lost chick stuck its head in the water and “played dead”! 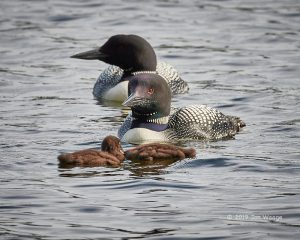 The parents swam nearby without interfering as the sibling began pecking at the lost chick. Sibling rivalry and even siblicide is not at all uncommon in nature, and well studied in birds of prey like loons. The behavior of parents and chicks is geared toward large and healthy fledglings. Sometimes that is not possible and resource go to the healthier one early. It is heartbreaking to watch but not “unnatural”. 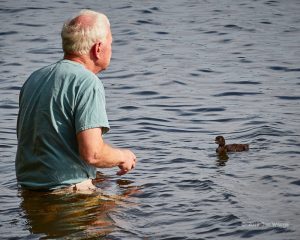 After a few minutes, John waded out again and the chick swam to him.

Had the “lost” chick been left with the parents, it seemed certain that it would have ended up abandoned and unfed again. This is likely the same fate of our second chick last summer. This time, however, we found the rejected chick and had the chance to save it. We, after consultation with Loon Preservation Committee, decided the best option was to bring the chick to the closest licensed and experienced loon rehabilitator.

GOOD NEWS:
Jen and I immediately drove the chick to the rehabilitator in Maine. Though deeply saddened that the reintroduction failed, we are greatly relieved by what we learned. She told us the chick was underfed and probably had been for a while. She agreed that reintroduction was likely to end badly. But, she also told us that there was a very good chance the chick will survive and be successfully released. We will keep in touch with her and let you know of Placido’s progress over the summer. 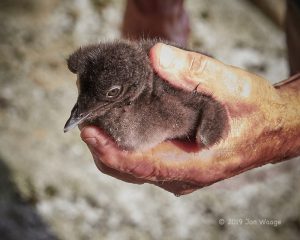 Placido is off to a new home and Pearl will get more attention from its parents.

GOOD NEWS:
Sadly, we are down a loon chick on Pleasant Lake again. But this morning, I took the following photo of a new addition to the lake: Eight very young Common Mergansers and their mother. 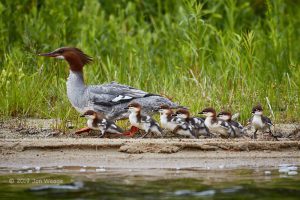 Loons are fed by their parents until grown, but merganser chicks are quickly taught to fish on their own. Hopefully, they will all be around for a while!

Finally, Will, Jen and I would like to thank all of you who have responded to this sad event and to previous newsletters. Your support has been so generous and heartfelt and it motivates us to do an even better job of helping you get to know your neighbors, the fauna and flora of Pleasant Lake.

We cannot always protect our loons and wildlife from natural events like predation and sibling competition. But it is clear that our PLPA community is ready and able to help lessen the risk to our lake and loons from our fellow citizens. Whether it is discouraging lead fishing gear, being watchful for invasive species, or encouraging neighbors and visitors in their boats to be cautious and respectful when the chicks and parents are on the lake; we all can make a difference. Thank You!!