Loons, Mergansers and Other Birds on the Lake 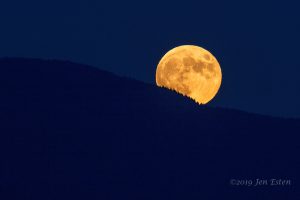 We were lucky enough Tuesday evening to watch the nearly full moon rise over Kearsarge Mountain. It’s always a treat to end up in the golden path it makes on the water. 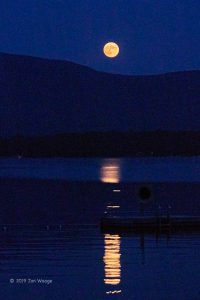 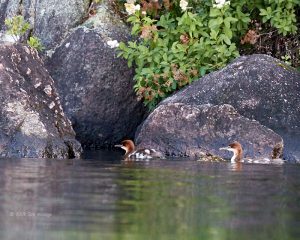 Merganser chicks without a parent.

We have seen and heard reports of merganser chicks on the lake with no parent. Some seem to have been temporary separations, but others appear to be missing their parent. Given how well these birds, unlike the loon chicks, can feed on their own, and how hard it would be to catch healthy chicks, it seems best to not intervene. The photo above was taken early on July 14. Both chicks were actively hunting for fish. 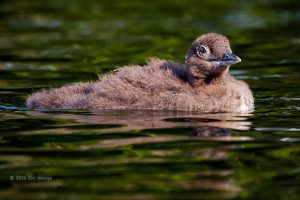 Pearl keeps on growing and is now diving regularly. The loons are spending more time further out on the lake and diving deep for longer periods. This leaves Pearl vulnerable out on the lake; especially when there are waves or choppy water. Big as she is, it is still hard to see Pearl. 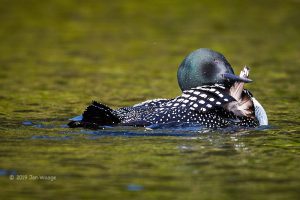 This preening male reminds us of things we take for granted, like having arms and hands. His beak has to serve as weapon, food catcher, nest builder, and comb. Preening is an important daily activity. Loons are buoyant but have to dive deep and swim quickly to catch food. They decrease buoyancy when diving by compressing their feathers and squeezing out excess air. Feathers need to be cleaned and rearranged in the right places after a period of diving.

Placido continues to grow and improve, eating 3/4 pound of fish a day. We are feeling more optimistic about the future for him.

Jen has been spending time photographing several other interesting birds around the lake and in Turtle Cove. Here is a sample of them. 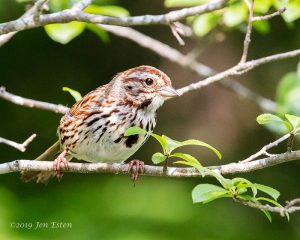 From the familiar Song Sparrow we hear singing all around the lake, 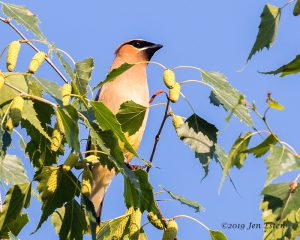 to the always elegant Cedar Waxwing, 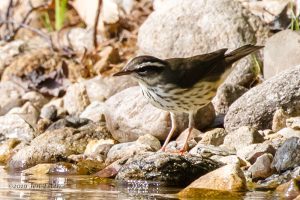 to a rarely seen Louisiana Waterthrush which, despite its name, is a member of the warbler family. Since they are indicators of high water quality, we hope this one is breeding on the brook feeding into Pleasant Lake where it was photographed!

In addition to these adults, there are plenty of fledglings feeding in Turtle Cove. 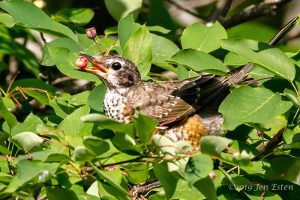 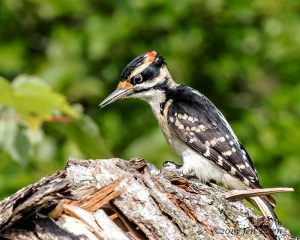 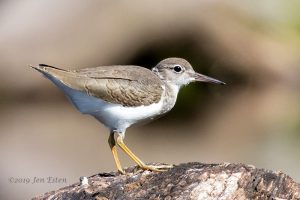 Juvenile Spotted Sandpiper. You may have seen the adults, with spotted breasts, bobbing their tails as they forage along the shore. They are the most widespread sandpiper in North America. Interestingly, these sandpipers are polyandrous – the female has several mates, lays eggs in their nests, and the males raise the young. Only a handful species of birds in the World are polyandrous!

Next time, we hope to bring you into Turtle Cove for some damselflies, dragonflies and other critters. The Cove seems to be slowly recovering from last year’s lake lowering. Meanwhile, an emerging mayfly basks in the sun following a year or two as a nymph in the water. Adult mayflies do not feed (or even have digestive tracts). If lucky, it will have a few days as an adult to breed. Thus the name of the group of insects it belongs to – Ephemeroptera (from the Greek ephemeros meaning “lasting a day” and pteron meaning “wing”). 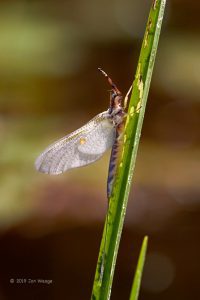