Following some rain early in the week, we had a few sunny days to explore Turtle Cove at the NW end of Pleasant Lake.

Things are picking up in the cove with the warm weather. Many of the insects that were around last summer are finally beginning to appear. Here is a sample of Odonata (dragonflies and damselflies) and some other creatures of the cove. 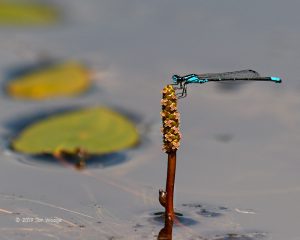 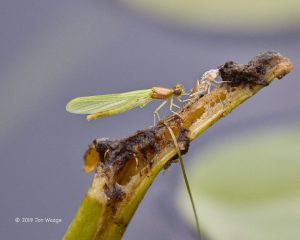 Damselflies and dragonflies spend a year or more as an aquatic nymph and then emerge for an adult life span of a few weeks. Here is a recently emerged damselfly, Eastern Forktail (adult photos follow), just behind its shed nymphal skin. Within hours the wings are pumped to full size and dry, allowing it to fly. 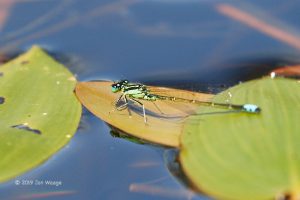 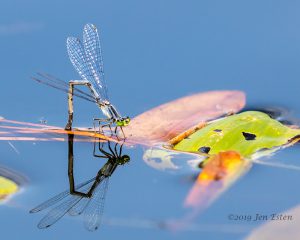 Female Eastern Forktail laying eggs. Damselflies have a knife-like blade (ovipositor) at the end of their abdomen which they use to poke holes in plant tissues where they then deposit eggs. She will lay dozens of eggs at a time.

Damselflies usually have their wings closed together over their slender abdomens. Here are three other common damselflies on Pleasant Lake. 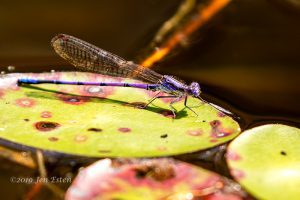 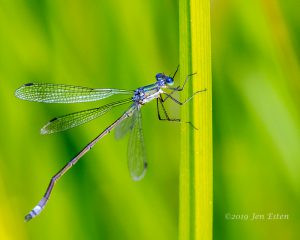 Male Spreadwing (Probably Emerald Spreadwing – Lestes dryas). These damselflies are the exception to having their wings closed over their abdomens. Their slightly spread wings identify the genus, Lestes, they belong to.

Dragonflies also are common in the Cove. They are larger and have fully spread wings when at rest. Here are six common species now in the cove. Dragonflies and damselflies were the first animals to take flight – over 300 million years ago. Some dragonflies back then had wingspans close to two feet! 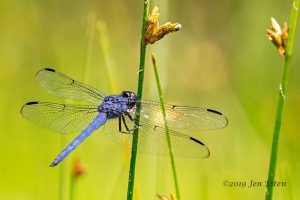 Male Slaty Skimmer (Libellula incesta). They spend most of their time flying and chasing each other. 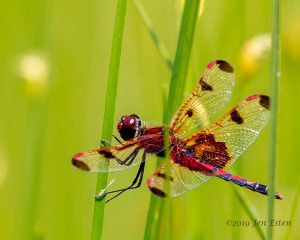 This male Calico Pennant (Celithemis elisa) ranges in color from a pinky-red to brilliant orange. 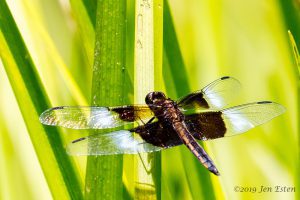 The male Widow Skimmer (Libellula luctuosa) is easy to recognize by its white bands next to black ones on each wing. 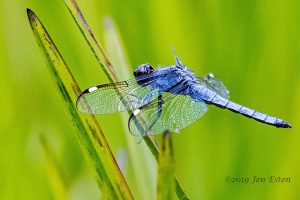 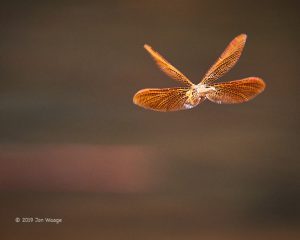 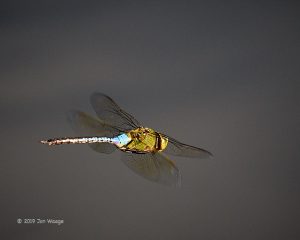 This large Green Darner (Anax junius) rarely stops flying.We added this photo of one in Florida so you can easily recognize (big, green in front, blue behind) the species as they cruise by. They migrate from the Southern US to Canada and back each year. They do so over two generations. Like Monarch butterflies, that means the insects heading south at the end of the summer have never been there and are not following any other dragonfly that has been there! 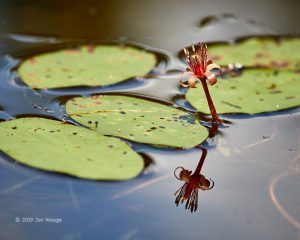 You’ve seen these “water lilies” all around the lake. They are named Watershield (Brasenia schreberi) and many of them are now in bloom. They are also a home, or at least landing place, for lots of cove dwellers. 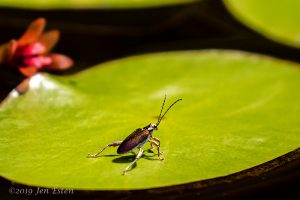 A Chrysomelid water beetle. Called leaf beetles, many Chrysomelids are common garden pests, but this one lives only in swamps and marshes. 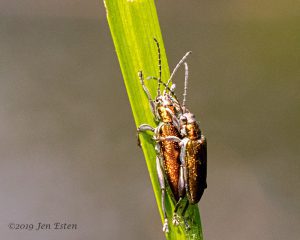 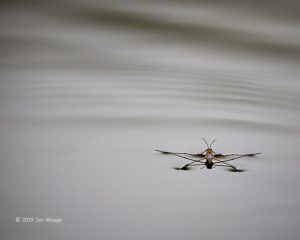 One of the most interesting insects in Turtle Cove (and on the lake) are water striders. These bugs (Hemiptera) have their way with fluid dynamics and physics. Their “feet” have many tiny hairs that trap air giving them incredible buoyancy. You can see the “pits” in the water where the “feet” float – caused by the strider’s weight pushing down on the water surface tension. The front legs are for grabbing things, the middle pair for moving and the hind pair for steering and braking. As the legs push against the water, a small wave forms which they then push against to gain incredible acceleration. Measured in body lengths, it is about the same as a six foot tall human swimming at 400 MPH!

All photos by Jen Esten and Jon Waage.