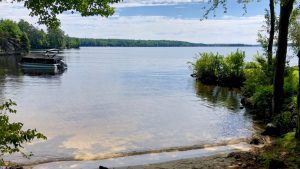 This is the small cove on Long Lake in Bridgton, Maine where Placido will be released early in September when he is ready.

In order to show you where Placido is in his growth process, let’s compare Pearl from last week (7 August) to this week (15 August). You can see she has now shed almost all her baby feathers. There are still some on her neck and a Mohawk of fuzz on her head! This comparison suggests Placido is about a week behind since he looks more like she did on the 7th. 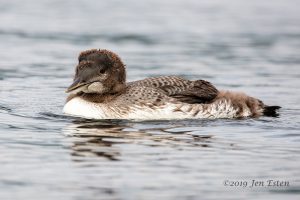 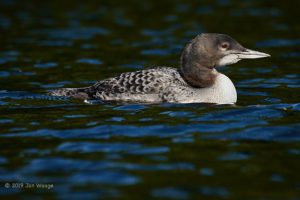 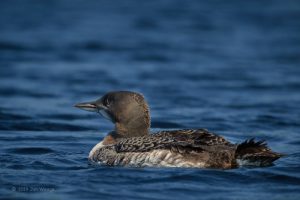 Below you will see that Placido looks more like Pearl did a week ago. That makes sense given how underfed he was when we brought him to Maine.

On August 15, Jen, John Wilson, and I visited Placido and his wonderful rehabilitator, Kappy, in Maine. It was so worth the drive! 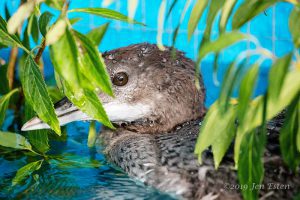 When we arrived, he was trying his best to hide from us in the forsythia branches attached to the side of his pool. 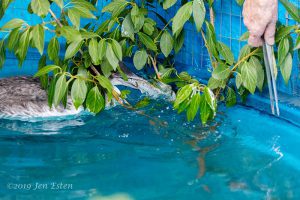 In this photo, Kappy had just fed Placido a fish. Early in his rehabilitation, she found he would not accept hand held feedings, but was comfortable with using tongs. 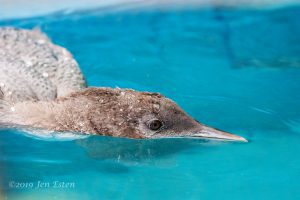 Once coaxed out of hiding, he assumed the posture of a loon wary of danger by being as low in the water as possible. Just a reminder to all. If you approach a loon that looks like this, you are too close! 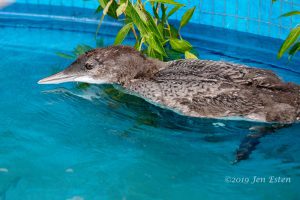 After a few minutes with all of us standing there and talking softly to him, he began to relax and allowed us to have better views. 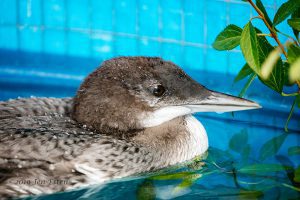 Here he is more relaxed. You can see by the remaining down feathers that he looks more like Pearl did last week. We still can’t decide if he is about the same size as Pearl or bigger. He has been getting lots of fish six times a day! He could not have been in better hands than he has been with Kappy for the last two months!!

Although we would love to be there when Placido is released into a quiet cove on Long Lake, the release date will be largely determined by him. Once he shows signs of trying to fly, he will almost immediately be released. We will, of course, let you know when that happens.