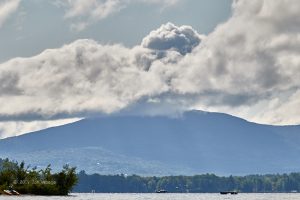 Mt. Kearsarge was trying to look like a volcano this morning!

We’ve had a rather odd loon week. Several times there have been 3 to 4 adult loons swimming and fishing together peacefully. The following picture was a day ago and includes both of our adults and another loon. 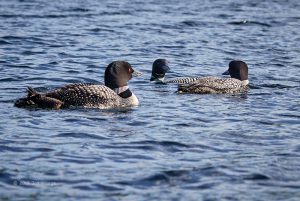 Usually another adult loon on the lake is treated as a threat and there is considerable commotion. Is this a former chick (now 3-5 years old) visiting? Or, could the parents calmly be herding another adult away from Pearl (who is hanging out near Blueberry Island)? Or, is it late enough in the season that their chick, Pearl, is no longer in danger? Still lots to learn about loons!! 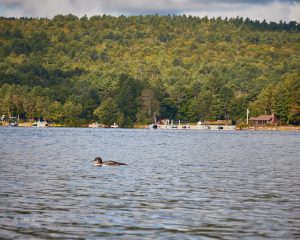 Meanwhile, Pearl has been spending more time alone near Blueberry or on the lake. 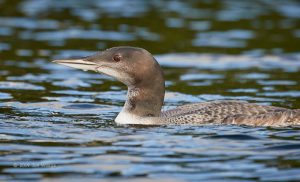 Pearl has now fully shed the baby feathers and has a very adult head shape. We have not seen Pearl flying yet but she does dive for food. 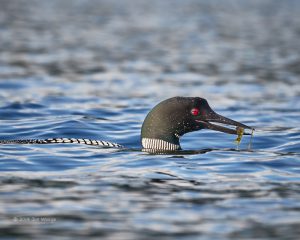 This morning, the female was nearby and bringing Pearl food; as usual, a perch. 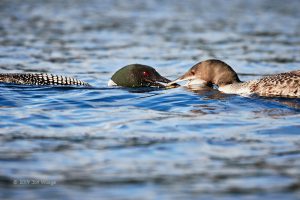 As you can see, Pearl is fully grown but still always looking for a handout.

Latest word on Placido is that he is doing fine but still is not quite ready to be released. 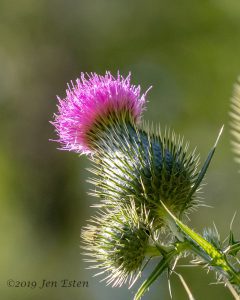 There are native thistles in the area, but the common ones are invasive and a spiny nuisance! We are tolerating a few in the yard for local pollinators and goldfinches. We will be replacing these with native thistle species in the future. 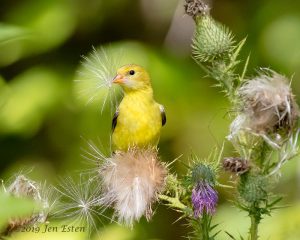 American Goldfinches are seed eaters and also thistle lovers. Unlike most songbirds, they feed their young only seeds.

Their breeding time is later than most songbirds – mid to late summer – which coincides with the ripening of many seed plants, including thistle. In New England, the last eggs are laid in mid-August, so they usually only raise one brood per season. Because they breed so late, they are among the most colorful song birds in the Fall. 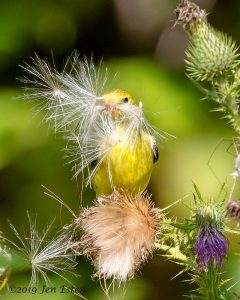 This female may be gathering seeds and also using thistle down to line the inside of her nest. But how is she going to get that mess to her nest? 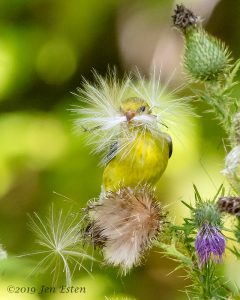 All ready to fly! Nests are built by females alone. They use spider silk to attach nest to supporting twigs. It may take up to 6 days to build the nest!

Attracting nesting Goldfinches can be well worth the pain of removing bull thistles after nesting season! Goldfinches also enjoy the seeds of Black-Eyed-Susan and Coneflower. If you have these in your garden, you may attract flocks of Goldfinches if you don’t cut them down until very late fall.

To be continued … Jon and Jen