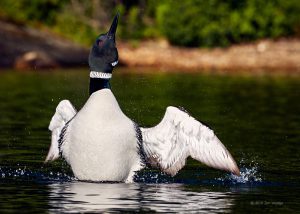 Join one of Placido’s parents in celebration!

We received an email from Kappy, Placido’s rehabilitator, late yesterday with some very good news! Here is the main part of her wonderful email to us all:

“Placido was released this afternoon. As usual, as I like best, the release was rather uneventful! He swam off, shook himself, looked back and then headed on his way. He ’said’ neither “thank you” nor “good riddance”. He spent a lot of time with his head down in the water. I don’t think so much looking for fish as just looking at what must seem very strange compared to what he’s been accustomed to.

He dove a few times, didn’t call. He seemed very much at home, relaxed and comfortable.

He was very angry and aggressive when I caught him in the pool and carried him to the big box in the garage. He screamed and thrashed. Going to the lake he was awful for the entire ride. He pounded two large holes in the box, and when I was carrying it he was leaping around as the box would suddenly be very light, then much heavier where it hadn’t been moments before.

I didn’t remember the camera until he was pretty far out, and then there was reflection on the moving water so he could hardly be seen.”

We will, of course, keep you posted on any further news from Kappy. For now, a big sigh of relief and thanks again to all of you who were involved in recovering Placido on Pleasant Lake and especially to Kappy for her amazing dedication and skill at bringing the little guy this far.