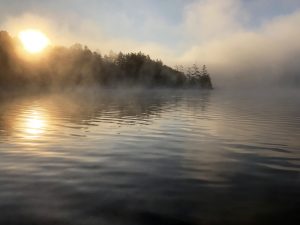 The weather has turned a bit colder, the wind is down, and the sun comes up later. An early morning kayak or paddle board ride can be a misty treat! Mary was out on her board when it was below 40 and took some great iPhone photos as the sun rose. 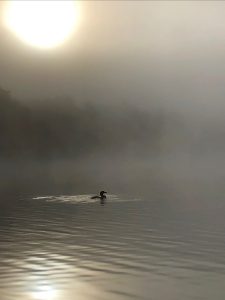 Another great photo by Mary as Pearl emerged from the mist! 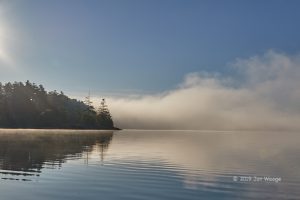 Jen and I were out in warmer weather and absolute calm this morning to capture more mist and loons. 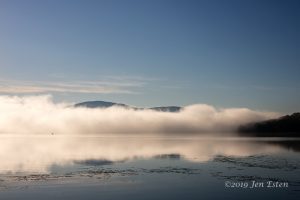 We shared the lake with a few fishermen.

We still have 4 loons on the lake. Two parents, their almost constant adult companion, and Pearl. Pearl has been seen flying a bit. We saw her cover about half of the lake this morning and I was lucky to catch her practicing later. 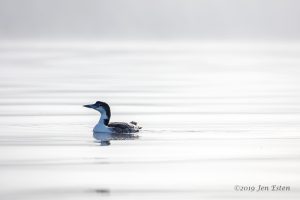 Pearl in the early mist. 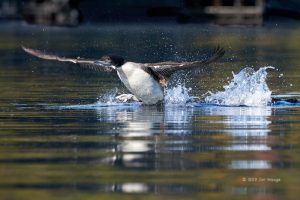 Pearl tries out her wings later in the morning. Loons have a lot of mass to lift from the water. Big wings help, but they must run and flap at the same time to get up speed. 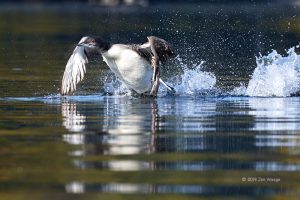 Having those big webbed feet way back on the body gives loons great swimming and diving speed. It really helps them heading down the runway, gathering speed. 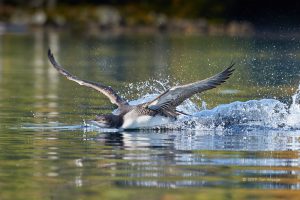 Loon-ar landing. The practice flight was short and ended with a nice belly flop glide. 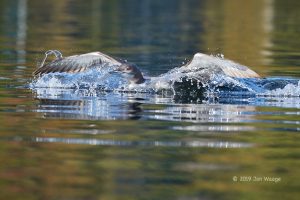 It will be another month or two before Pearl heads to the Gulf of Maine for the winter and the next stage of her life. What we have seen in the last week or two of her diving and flying gives us confidence she will be ready by then.

The lake level is dropping fast and it is already harder to get into Turtle Cove. Jen’s visit there today revealed a marked change in color following temperatures in the 30s a few days ago. We have been taking lots of photos of the lake from various perspectives as we paddle around and will share more of them in future editions. We will also track the lake lowering. Hopefully, it will be fast, allow repairs this year, and be on its way back up before the bottom of Turtle Cove freezes again. Let’s all hope it doesn’t rain as much as last year until the repairs are done. 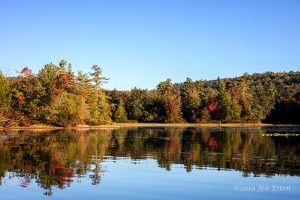