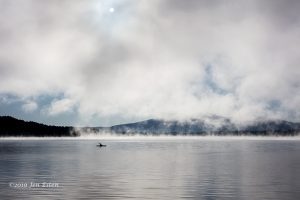 Lake level is dropping, leaving canoers, kayakers and paddle boarders a walk to the water. Well worth the effort on these misty fall mornings!

Pearl and at least one of her parents are still on the lake. Getting out for photos is harder now but we hope to have some by the next Newsletter. This is the time of year the male may be ready to leave for the ocean. The female will leave later and the Pearl should be out by the time the lake starts to freeze. Given how much time Pearl has spent alone and diving on her own, we expect all to go as planned. 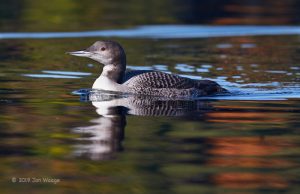 We requested a status update on the dam from the town of New London and the contractor who will be performing the repairs. Since 9/19 the lake has dropped a little over 2 ½ feet so far. The water level needs to drop almost 2 more feet to start repairs. As the level of the lake gets lower, the rate of flow lessens to some degree, so if we continue to have little rain the dam should be able to be worked on in two weeks or so. This is all weather dependent of course. Once started, the work should take a little more than a week to complete. We hope this is all accomplished and the lake is back to winter level before the lake’s shallows freeze. 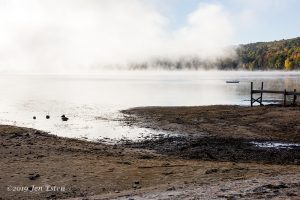 Lake level on West end of the lake on September 30th. 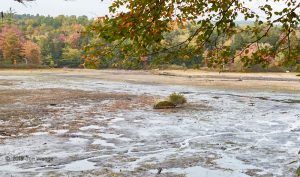 Turtle Cove on October 1st. The only running water left in the cove is the main channel of Great Brook. That is the loon nesting platform in the middle of the photo. 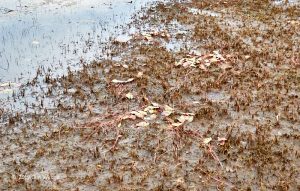 Exposed water lilies and other bottom vegetation in the cove. Most cove dwellers are probably already in the mud or deeper lake for the winter. If the exposed ground does not freeze this year, like it did last year, we don’t expect too much of a problem.

What Happens to the Cove Dwellers over the Winter?

Even when the lake level is not being dropped, aquatic organisms must still survive the winter under the ice. In the next few issues, we will focus on some of these species and how they deal with winter in Pleasant Lake and other parts of the watershed. Let’s start with turtles, aquatic frogs and salamanders. Later we will deal with toads and frogs that overwinter away from water. 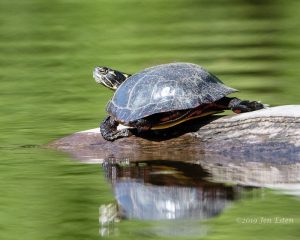 Turtles, like this Painted Turtle, dig a wintering “cave” in the mud underwater as winter approaches. There they hibernate. Their metabolism slows enough to allow them to extract oxygen from their moist surroundings through the winter – as long as the mud is wet and not frozen. 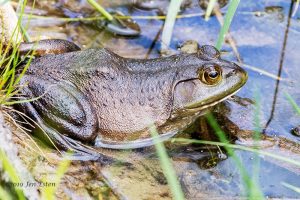 Green Frogs, Pickerel Frogs and Bullfrogs (shown here) spend most of their lives in or very near water. In winter, they do not burrow deep into the mud, but stay on the bottom or slightly dug into the mud so they can avoid freezing and get enough oxygen through their skin to survive.Their metabolism drops as the water gets colder, but they do not hibernate.They can move to places in the lake where the water is deep enough to be warmer and they can avoid the ice. 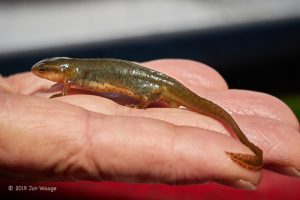 Red-spotted (or Eastern) Newt from Turtle Cove. The adults (like this one) stay active all winter. Their metabolism slows, like the frog’s, and allows them to move around and sometimes feed. However, there is a catch for this species. They spend their first three to seven years entirely on land! That is where you have probably seen them most often around the lake. But those young newts don’t look like this. 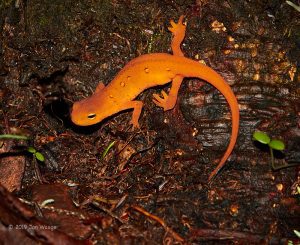 Red Efts are the terrestrial juvenile stage of Red-spotted salamanders. They are also the State Amphibian of New Hampshire. You can see them far from lakes and ponds in moist woods after rain. They are often crossing the roads around Pleasant Lake – kept an eye out! Fortunately our woods have lots of rock crevices and large rotting logs they can hide in during the winter months (and when it is dry in the summer). By now you know that bright red things might be trouble if you try to eat them. Red Eft skin contains a neurotoxin and most predators avoid them. The adults in the lake still contain some of that neurotoxin.
But, one of the most amazing things about these salamanders, that can live 15-17 years, is their body transformation. Efts start out in the water as small larvae with gills. They loose those during metamorphosis and grow lungs to breath with (which they retain as adults). Their hearts also change from typical two-chambered to three-chambered which gives them more help moving about on land. 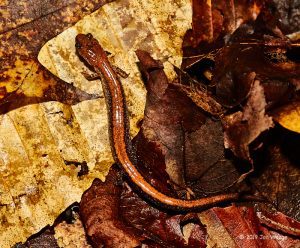 And now for something completely different … The Red-backed salamander (Plethodon cinerius), common in the woods around the lake, is completely terrestrial, and now is its mating and egg laying season! Redbacks vary in the color of the stripe on their backs. This one is fully reddish orange, but in other parts of New England they can be gray. They have no lungs and must stay moist in order to breath through their skin. You rarely find them unless you look for them under logs or stones in moist woods. Please put the log or stone back the way you found it.
These salamanders mate in the woods, lay eggs under rocks and in crevices, do most of their early growth in the egg, and get through the winter and dry spells in leaf litter, rock crevices, under rotting logs or even in worm burrows. As if that wasn’t amazing enough, the red stripe is thought to help them mimic the warning coloration of red efts (which share a lot of the same habitats). That may explain why the red striped ones are less likely that the grey striped ones to run away when found. 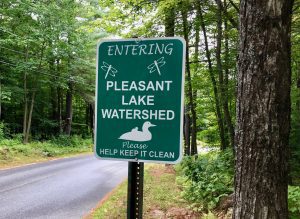 We have moved away from the lake with the terrestrial salamanders, but all of the watershed is essential for understanding what is going on in Pleasant Lake and well worth exploring. Next time we’ll explore how some other amphibians around the lake (peepers, wood frogs, gray tree frogs and toads) who will greet us in the spring with their music are dealing with the coming winter.

To Be Continued … Jon and Jen

All Photos by Jen Esten and Jon Waage