Speaking of change, the PLPA blog and email newsletter has a new name. The purpose remains the same. “The Nature of Pleasant Lake” covers both announcements of Lake happenings and our natural history presentations of the Lake and its watershed. 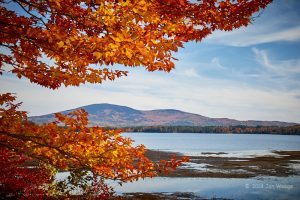 Fall color is at its peak around the lake. This view is from the mouth of Turtle Cove. In this issue we continue to look at how some animals in the watershed are preparing to get through the winter ahead.

Pearl and both parents are still on the lake. The parents are molting into winter plumage (see below). We recently were able to get some pictures of all three loons and will post them in the next issue. 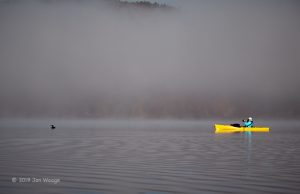 Jen and Loon in morning mist 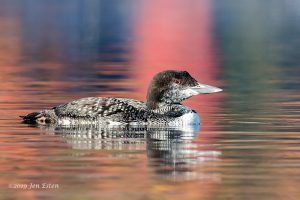 The lake slowly gets lower but work has yet to start on the dam repair. This week’s heavy rain will delay things, but plans for finalizing the repairs this year are in the works. Meanwhile, at least one of its inhabitants is moving to deeper water. Freshwater mussels are very important components of lake ecosystems. They filter organic material from the water, helping to clean the lake. 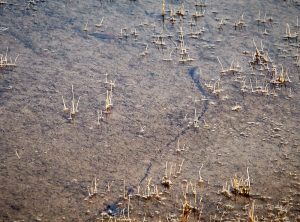 Freshwater mussel track (with mussel at top end) moving out toward deeper water.

How Terrestrial Frogs and Toads Deal with Winter

Not all frogs and toads spend their lives in water. The Pleasant Lake Watershed is home to a group of terrestrial amphibians who will greet us in early spring with their music: Spring Peepers, Wood Frogs, Gray Tree Frogs and Common Toads. 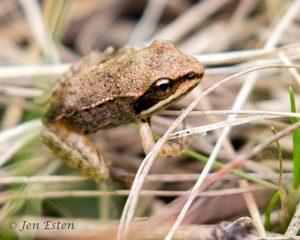 Very young Wood Frog (Lithobates sylvaticus) with its typical “raccoon eye mask” and yellow upper lip. Wood Frogs ought to be called ice frogs since they begin calling and mating in woodland ponds that are still partly covered with ice. They will have spent the winter under leaves or in crevices. There they may have been frozen solid for much of the winter! They produce cryoprotectants (analogous to the antifreeze we put in cars) that prevent ice crystals from forming in tissues and reduce dehydration effects. Wood Frogs are the only frogs that live above the arctic circle! 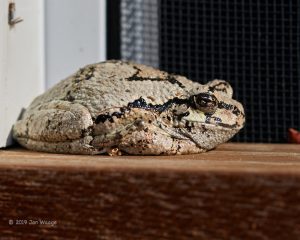 Tree frogs belong to the Hylidae family which breed in temporary bodies of water. Both Spring Peepers (Pseudacris crucifer) and Gray Tree Frogs (Hyla versicolor) hibernate in leaf litter and are able to withstand freezing for extended periods. They use the same “antifreeze” approach as Wood Frogs. 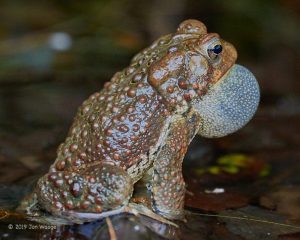 Common or American Toads (Anaxyrus americanus) mate and lay eggs in water, often temporary ponds, and their tadpoles develop quickly. Toads generally metamorphose into very small adults which do most of their growing on land. 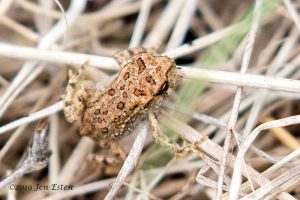 This toad is less than an inch and one of hundreds in our yard. Toads are good diggers and can burrow deep enough in soil to avoid freezing during the winter. They will use animal burrows or any place where they can get below frost level. There they go into a state of torpor until spring. It probably helps that here, in the North, a layer of snow keeps the ground from freezing too deep.

Last of the Summer Dragonflies

Most dragonflies and damselflies get through the winter as eggs or early larvae underwater. Others move south and have already left. A few late season species of Darners and Meadowhawks can still be found until a long killing frost. 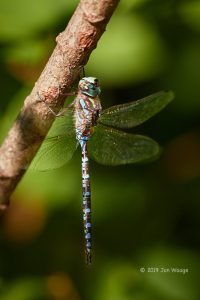 Male Canada Darner (Aeschna canadensis). Darners fly almost continuously, but they do hang up in bushes overnight. If you are lucky, you can find them and enjoy their beauty up close. 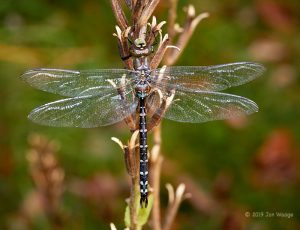 Male Black-tipped Darner (Aeshna tuberculifera). Dragonfly species have been flying for over 320 million years and originally were a lot bigger (up to two foot wingspan). 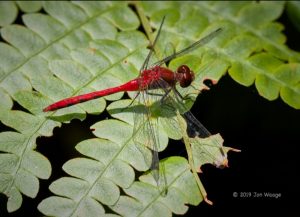 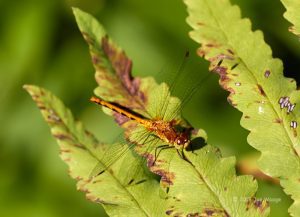 Fall is a time for red and gold dragonflies – mostly Meadowhawk (Sympetrum) species. A male (red) and female (golden) are shown here. Some Meadowhawks specialize in laying eggs in areas that will become temporary ponds next spring. That’s why you sometimes see them mating around fields and forest edges. The eggs will overwinter and hatch next spring when the low areas fill up with snow melt and rain.

Coming next — a Mist-ical Morning on Pleasant Lake 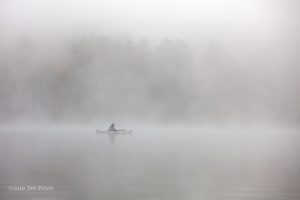 Jon exploring the Lake as morning fog begins to lift.

Jen and I spent a wonderful early morning kayaking on Pleasant Lake this week. We started surrounded by dense fog and ended watching it rise from the lake in the presence of our Loon family. We will share that next time.

To be continued … Jon and Jen