Turtle Cove - Hoping for the Best

As we wind down our part of the newsletter for this year, we'll focus on Turtle Cove and the other shallow areas of the lake still exposed due to the second attempt at lowering the lake level in order to repair the dam. The major nurseries for the plants and animals of Pleasant Lake are in these shallow areas.
10
Nov 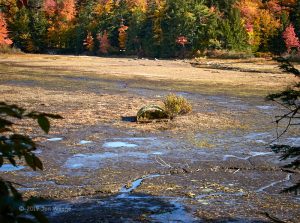 As we wind down our part of the newsletter for this year, we’ll focus on Turtle Cove and the other shallow areas of the lake still exposed due to the second attempt at lowering the lake level in order to repair the dam. The major nurseries for the plants and animals of Pleasant Lake are in these shallow areas. Plants are the base for the lake’s food supply and most are in the shallows. Many, and the animals that depend on them, made it through the last lake lowering and recovered this summer. Subjectively, we feel there was some overall impact from last year’s lowering and hope for the best this year.

The latest news we have on the dam repair is that it will get done this time. Hopefully in the next week or two there will not be much rain and the work can be finished.

Meanwhile, here are some reminders, focused in Turtle Cove, of the wide variety of animals that use the coves and shallows for food and nesting areas – including the loons. 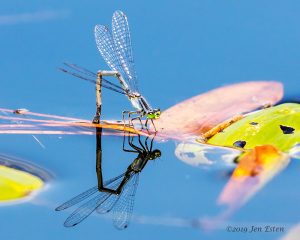 Forktail damselfly laying eggs in water a lily stem. Aquatic insects and other invertebrates spend their lives, from egg through adult stages, in or near the water. This damselfly’s eggs hatched in August and the larva will overwinter in the mud. 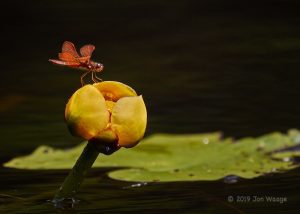 The animals we will see in Turtle Cove next summer, like this Eastern Amberwing (Perithemis tenera), are already in the bottom sediments in a resting stage. Some, but not all, can probably withstand prolonged drought and freezing temperatures. 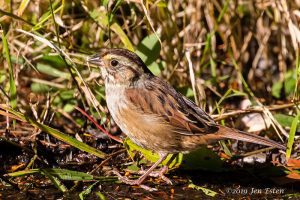 More than twenty species of birds nest in the coves around the lake. Swamp Sparrows need wetland habitat with tall reeds and sedges for nesting and food. 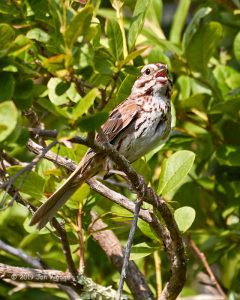 This Song Sparrow was singing to defend its territory and attract a mate. 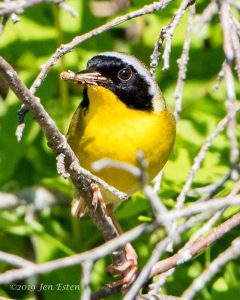 Common Yellowthroats also need wetland habitat and several pairs nest in bushes in Turtle Cove. This male has found a case moth’s hiding place in a cluster of sticks that the moth larva binds together with silk. 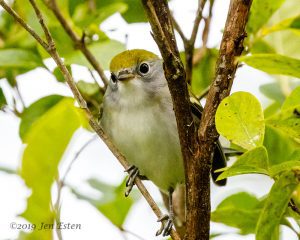 Chestnut-sided Warblers also nest in the shrubs along the edge of Turtle Cove. 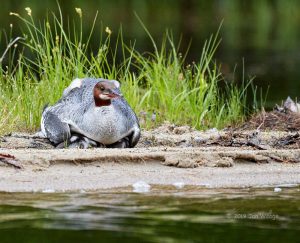 For many fish eating birds (like this Common Merganser), the coves around the lake are where they have nests and care for their young before they are big enough to be out on the lake. There is a reason that this female merganser looks so fat … 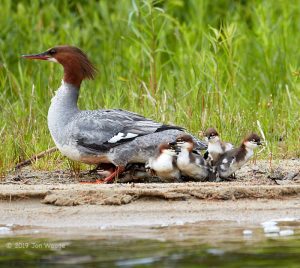 She was sheltering all eight of her chicks. 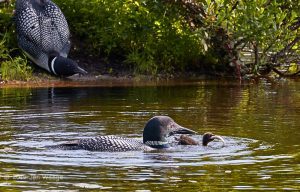 Our loons also depend on fish in the vicinity of the nest when the young are small. 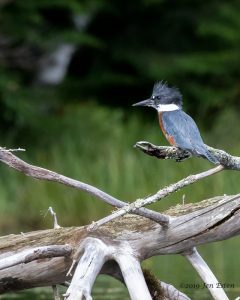 Kingfishers fish in the shallows of the cove and all around the lake. 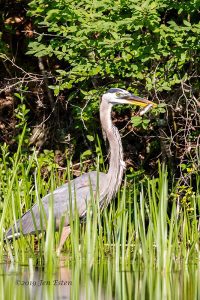 Great Blue Herons and other wading birds depend on shallow water full of vegetation for foraging. Although Great Blues will eat just about everything that moves, they normally go after frogs, snakes and fish. 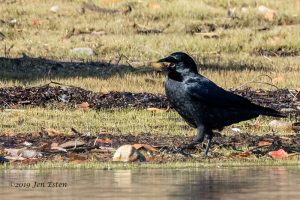 Crows are real opportunists and are often seen looking for food in the coves and along shore. Sadly, for the Lake, this one and several others were eating mussels that were exposed as the water level dropped. Mussels do an excellent job of filtering and cleaning the water. 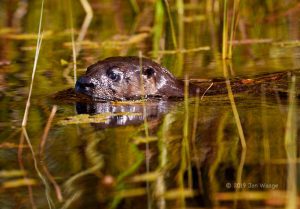 Rarely seen in the cove and around the lake, this Northern River Otter visited Turtle Cove in September. At that time, Great Brook and other water bodies in the area were pretty dry. Otters forage over wide areas looking for food in ponds and streams.

Our fingers are crossed that the lake will refill rapidly before it freezes and that next spring will find the loon platform floating peacefully. Next time we will review our summer with the loons and share our favorite pictures. 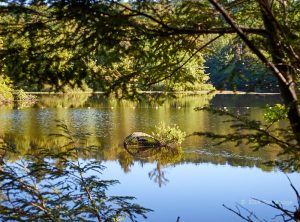 The Cove and Loon Nest Platform in Early Spring