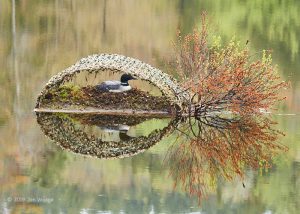 As our last contribution to the PLPA posts for this year, we want to review our summer with the Loon family. Almost all of the photos below are ones we have not used.

It has been a bumpy year for the Loons. Thanks to your support, the help and watchfulness of neighbors on Pleasant Lake, and our Loon rehabilitator, Kappy, it has ended with two full grown fledglings – Placido and Pearl.

Like the last 13 years, this summer began on the Loon nesting raft built and tended by John Wilson. Ironically, when we began our visits in mid-May, it looked like a mystical fish that had swallowed a loon. 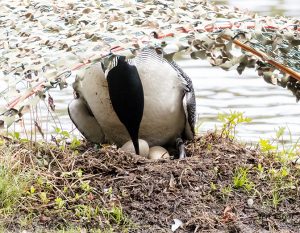 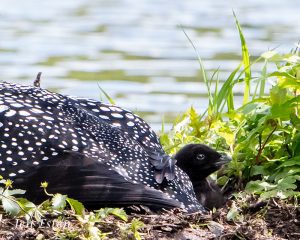 The first chick hatched on June 14, followed 1 day later by its sibling. 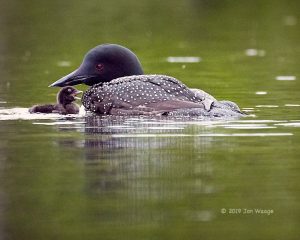 Thus began the constant begging for food by the chicks. There are two present on this day; one is tucked under a wing. 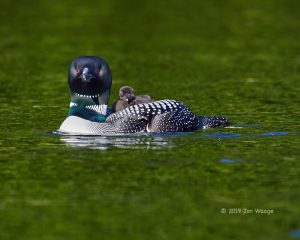 By the 16th the parents had left the nest with the chicks. This photo of a chick on the male’s back and the other under his wing was taken on June17th. 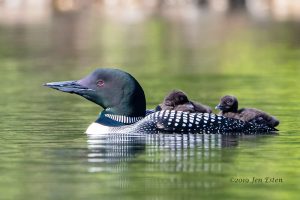 The cute phase – first ten days or so – when the chicks spend most of their time on their parent’s backs. 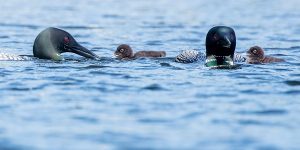 Soon they are spending more time in the water. 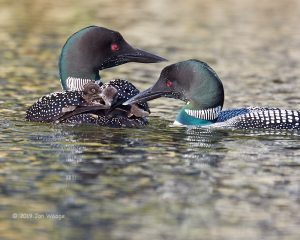 Snack on the aft deck

The chicks received a steady supply of perch and crayfish. 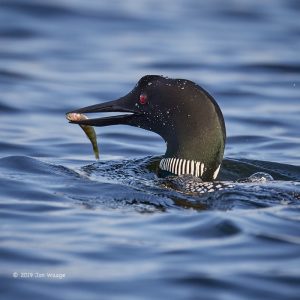 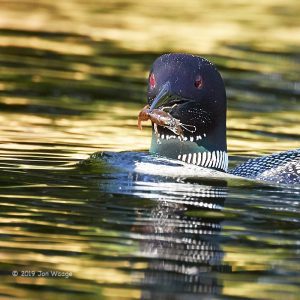 We all remember the shock of one chick gone missing overnight on the 23rd of June. Fortunately it was spotted and recovered in the afternoon of the 24th. As you recall, the chick was chased off by its sibling when we tried to reintroduce it. That chick, named Placido, was rushed to our amazing rehabilitator, Kappy, in Maine. Traditionally the chicks are given male and female names that start with the letter P. Unless they are blood tested and tagged we cannot know the sex of the chicks when they are named, so Placido may or may not be a male. 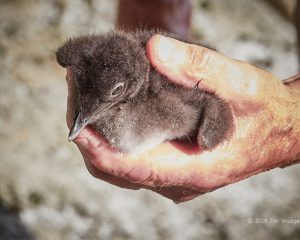 A tired Placido in John Wilson’s hand after the reintroduction attempt. 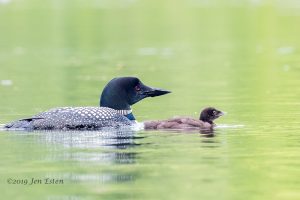 With only one chick to raise, the parents were providing Pearl with lots of food. Here she is roughly two weeks old. 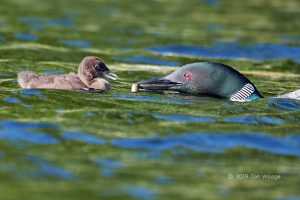 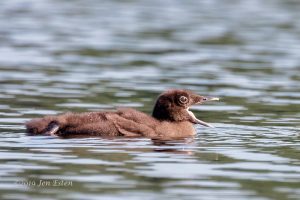 Pearl at nearly three weeks, either yawning or begging … 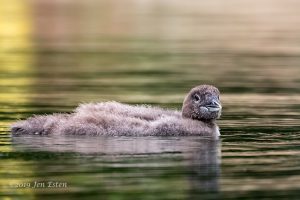 Now more than 5 weeks old, Pearl is getting more loon like. 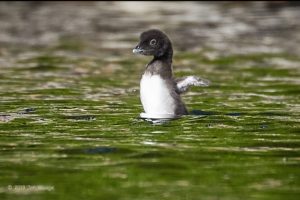 Not only is Pearl’s body growing, so are her wings. Five weeks separate these two photos. 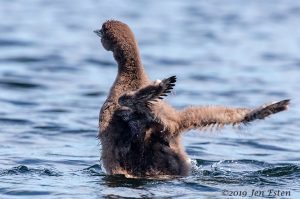 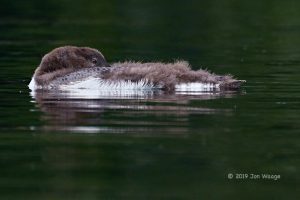 By the end of July (7 weeks) Pearl is beginning to molt into juvenile plumage. 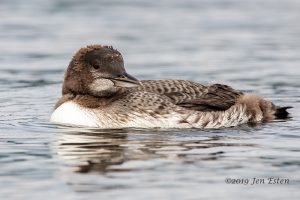 Early in August (8 weeks), Pearl has shed most of her baby down and has a “real” loon beak. 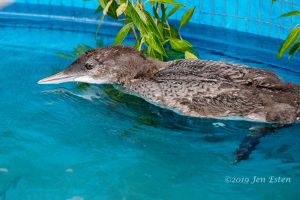 A week later we visited Placido in Maine. At least as big as Pearl, Placido had also lost most of his baby down and was in great shape! After such a rough start it was a joy to see him so big and healthy, thanks to Kappy’s dedication. 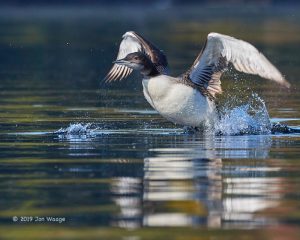 By mid-September, Pearl was regularly testing her wings. At 14 weeks old, she was seen flying around on the lake regularly. 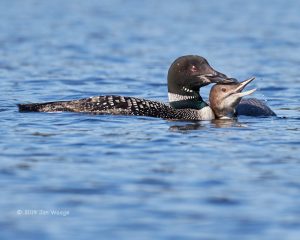 Even after three months of constant attention from the parents, Pearl is still pestering them for food. She is now capable of fishing on her own and spending upwards of 2 1/2 minutes underwater on a dive. 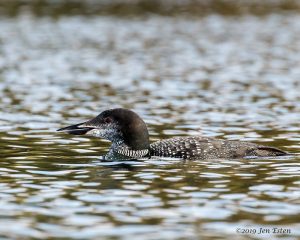 It looks like the female is turning gray from 3 months of hard work, but she is actually just entering into her winter molt ….. 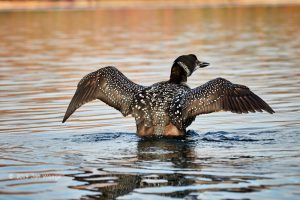 Both parents will soon be off to the Gulf of Maine for the winter. 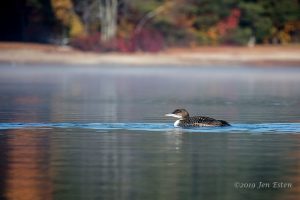 Pearl will hang around a while and is expected to depart before the Lake freezes over.

We will be back next May to continue our exploration of the nature of Pleasant Lake and its watershed. Thank you all for your support and encouragement. Thanks also to our Lake Hosts and volunteer weed watchers for their dedication. Have a great winter!

Hopefully our Loon parents will have a safe winter and return for their 14th season. After almost five months of parenting, they deserve a break!