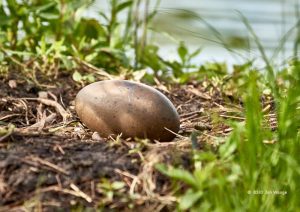 The loon parents were last observed on the nest the evening of June 13 even though their second egg had not hatched. Yesterday evening we marked the egg with penciled X to be sure it had not been attended overnight. It was not.
Today (6/15) Phil Keefe, Sunapee Region Summer Field Biologist for LPC, picked up the second egg. LPC will store the egg for now. If we develop a problem with future failed nesting, they can go back and analyze this egg. That analysis is quite expensive and there does not seem to be a need for it at this point. It is not unusual to have an unhatched egg now and then.

Sadly, once again we have one chick. However, as you will see below, Pablo is going to be a handful! 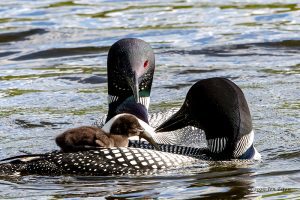 Pablo is getting full attention from both parents and a LOT of fish. 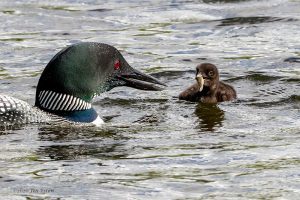 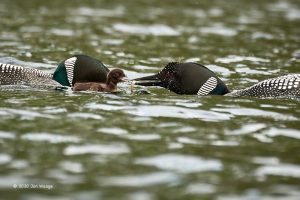 The loons have left the Cove and are looking for good fishing areas around the edge of the lake. Pablo has been very active between rests. 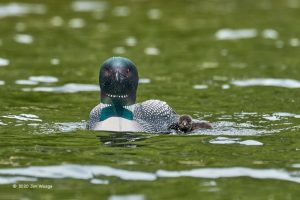 Practicing that “loon” look with mom. 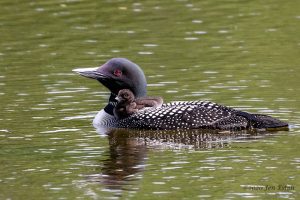 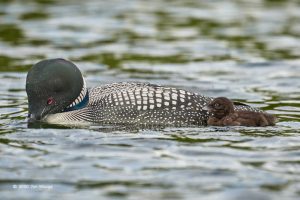 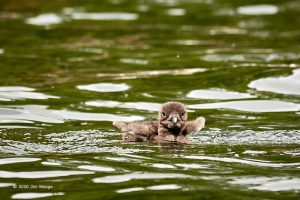 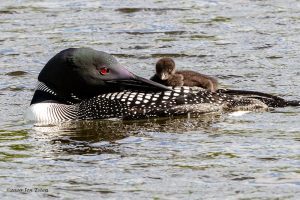 Or, just lounging on the aft deck.

Over the past few days, those of us on or near the lake have heard a lot of loon hollering! Some has been one parent calling the other back when they get separated while fishing, and a couple have been responses to Eagles. However, the biggest problem seems to be the presence of another loon on the lake. What follows are photos from an interaction Sunday evening between our loons and a third loon. 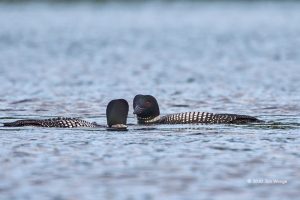 Our female (left) swims out to meet the new loon whose expanded head feathers are obvious. 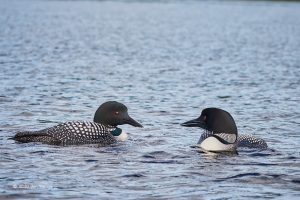 Like most aggressive interaction in animals, ritualized displays are more common than fighting. Here the loons with raised head feathers face-off and circle each other. 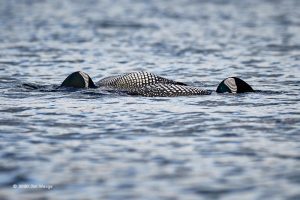 Loon attacks occur when one tries to stab the other from below. During the face-off, they often look underwater in case another loon is there.

The next step in the contest is for both loons to dive simultaneously – being the second loon down would seem to be pretty dangerous. What happens underwater is probably more display and maneuvering before they pop up and begin the face-off again. This interaction lasted about 20 minutes. The female left and went back toward the chick. She called to the male who came out to face the intruder with her. The two of them drove off the intruder after a few more display and dive bouts. While the parents were a third of the way down the lake dealing with the intruder, the chick was totally on its own! 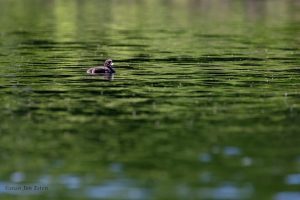 About six inches long and dark brown, a loon chick is nearly invisible from a distance. With parents off foraging and dealing with intruders, let’s be especially vigilant. 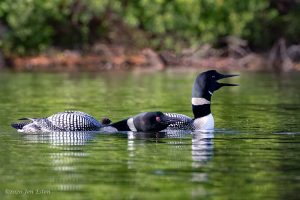 After the parents came back to Pablo, they were still agitated and calling in the direction of their encounter with the intruder.

It is hard to imagine this little tyke being the size of mom and flying by mid-September, but despite the interruptions, so far Pablo is off to a good start. 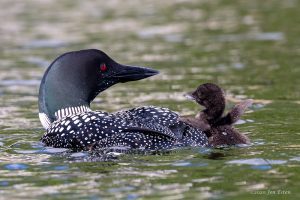 We are saddened that once again we have only one chick on the lake, but it may be for the best in this hectic year of black flies, eagles and intruding loons.