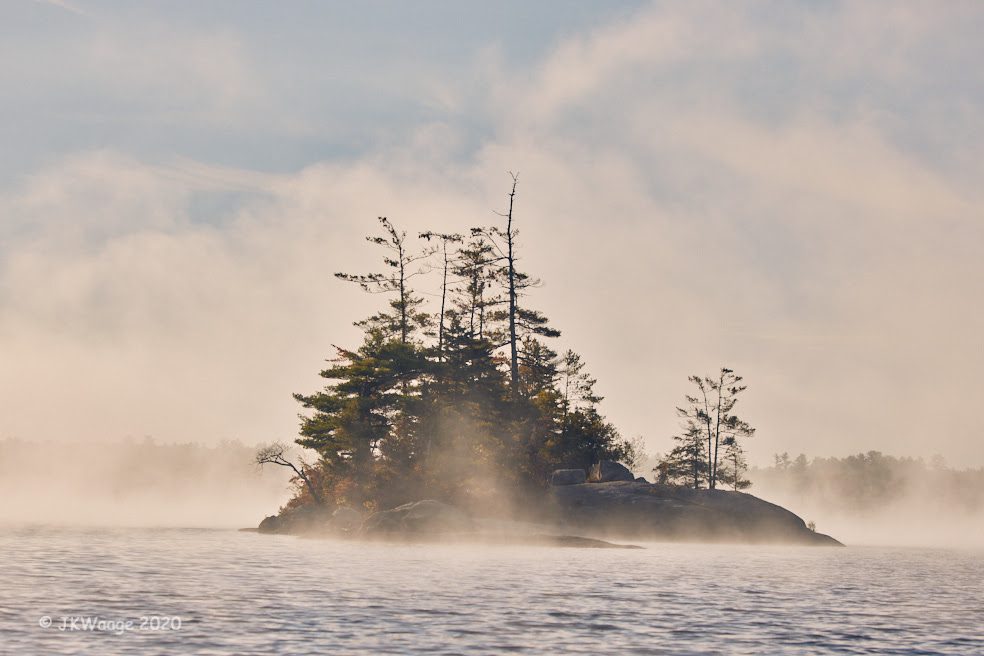 We had more sightings last week of the mother loon than of Pablo. We assume Pablo is just becoming more independent. Possibly the helicopter activity along the power line above the lake is keeping him near shore. The female (below) was watching them as they flew overhead. Mom and Pablo were together Tuesday evening. 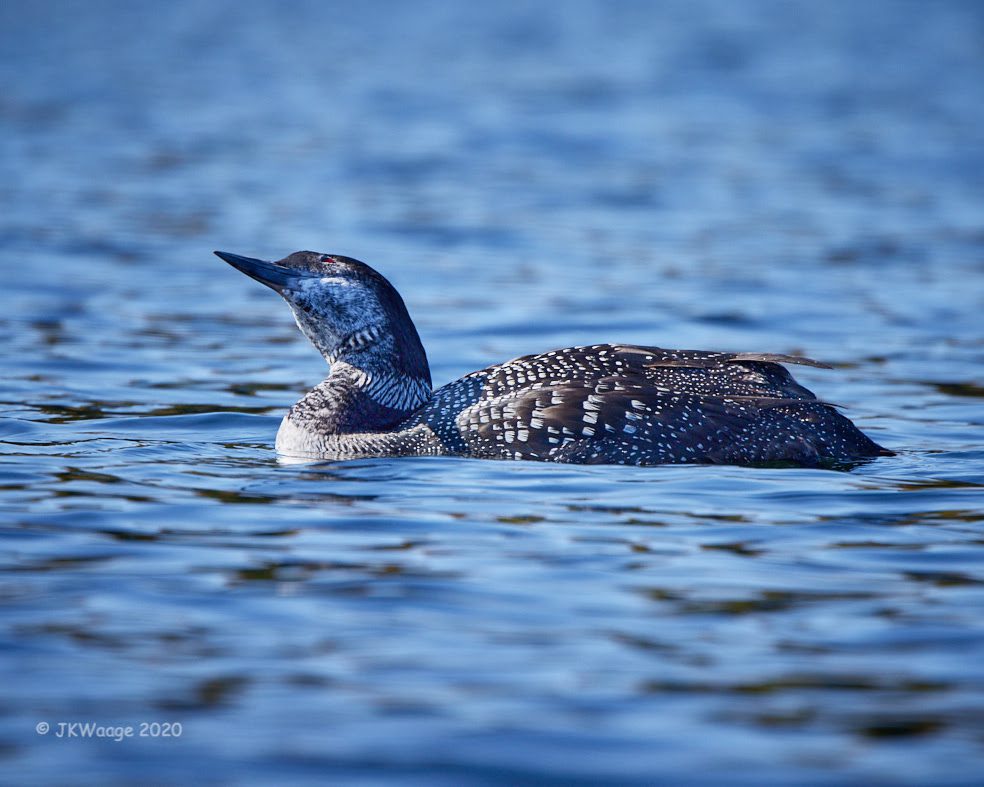 Below, mom is identifying herself. Both adults, you may remember, are banded on both legs. The female is easy to ID with the green and yellow bands on her right leg. 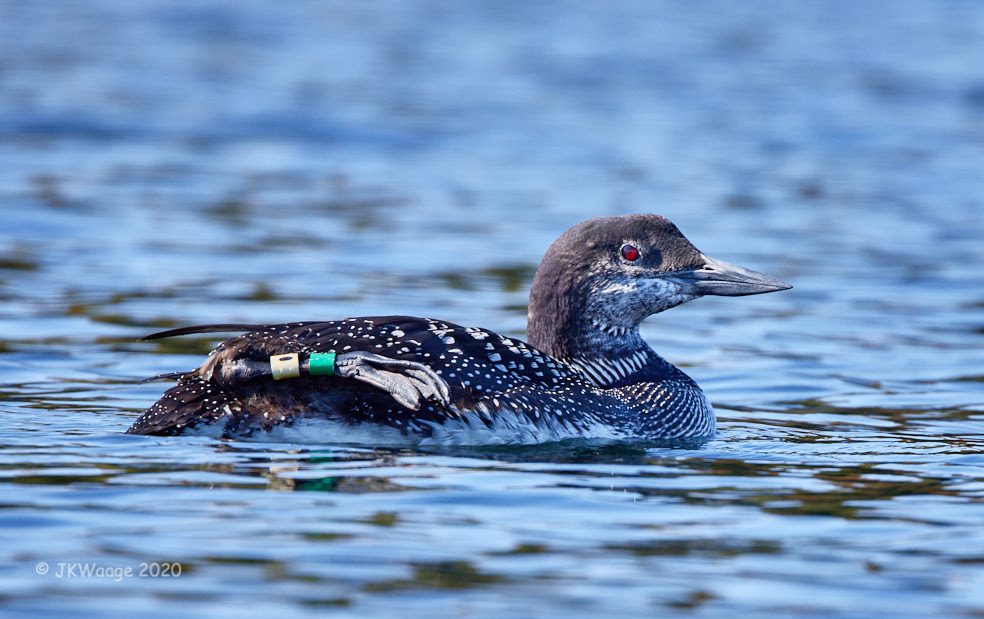 At 19 years she is very much an elegant lady and great mom. It is always a pleasure to spend time drifting with her on the lake. 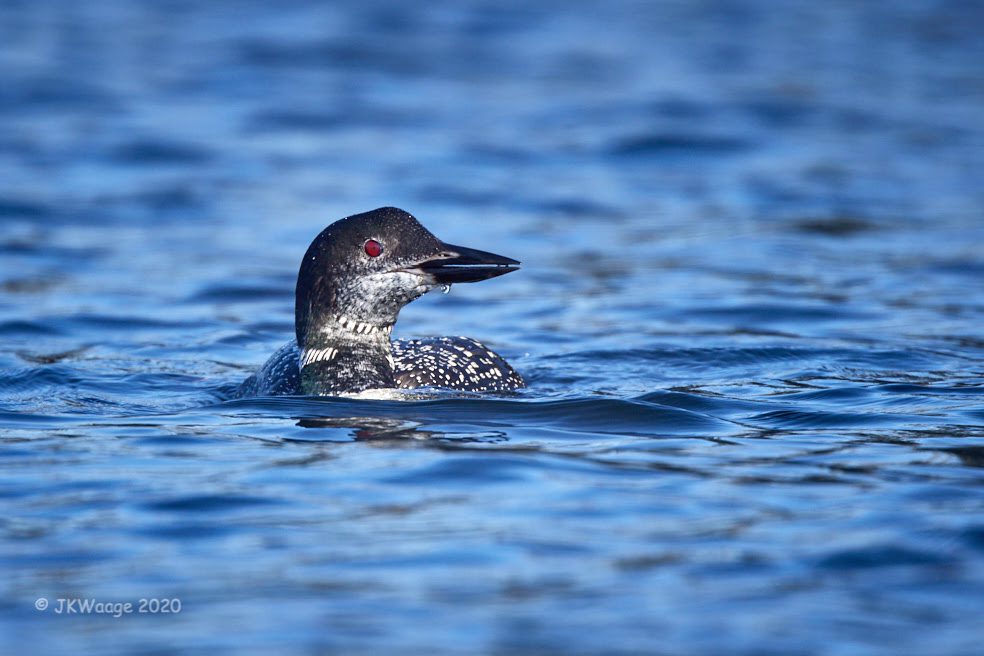 Loud Birds Around The Lake

Those on or near the lake have been hearing loon calls all summer, but some other local birds have also been making a fair amount of noise during the day and at night.

A group of raucous crows usually signals an unwelcome (to them) predator. Crows and Jays will often mob avian predators. Jen got some great photos of a recent encounter on the lake between a pair of juvenile Cooper’s Hawks and several crows. 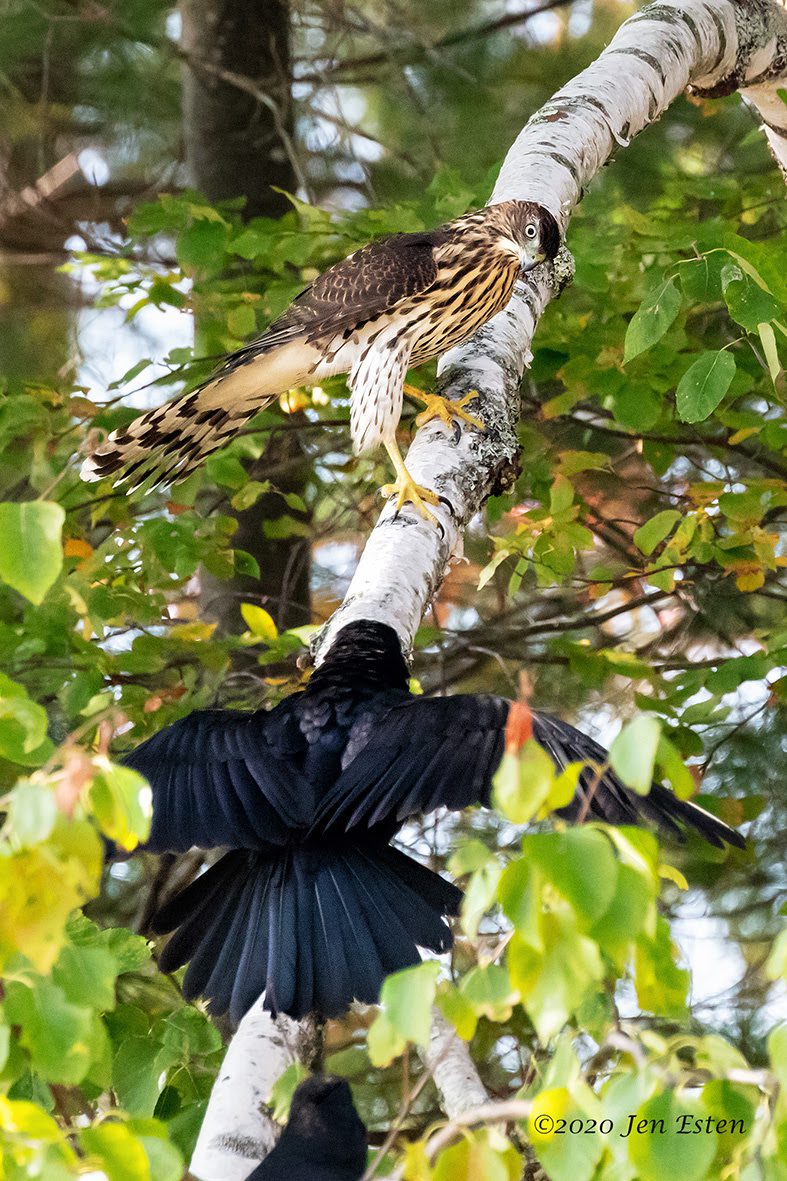 Eventually, the hawks flew off and quiet returned to Turtle Cove. 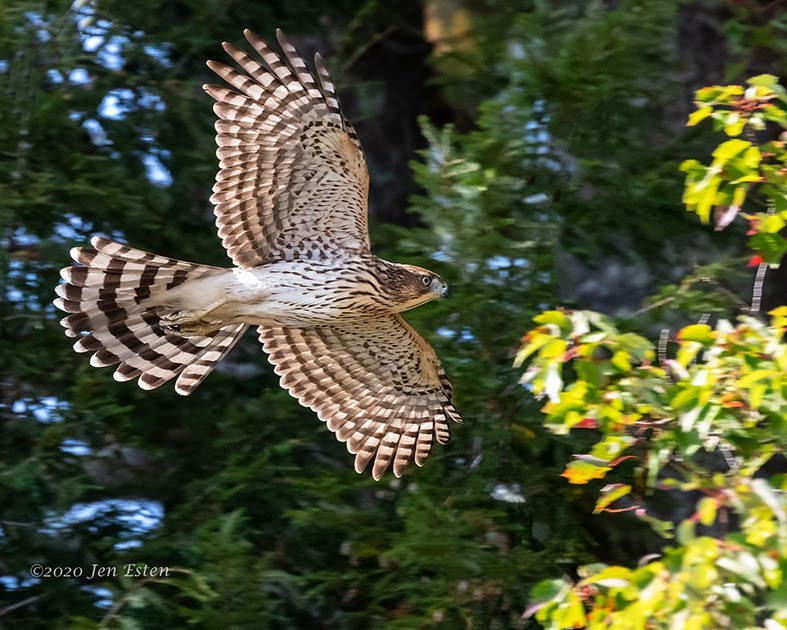 In the evening and at night, owls are commonly heard. The Barred Owl is our most common local owl. They are smaller than a great Horned Owl and lack the ear tufts. They have a round head and dark eyes and barred feathers across the upper chest. Male and female look alike but females can be up to a third again larger than a male. They prefer old growth forests and do not migrate.  They do move around in their territories which can be up to a mile in diameter and may relocate due to lack of available prey. 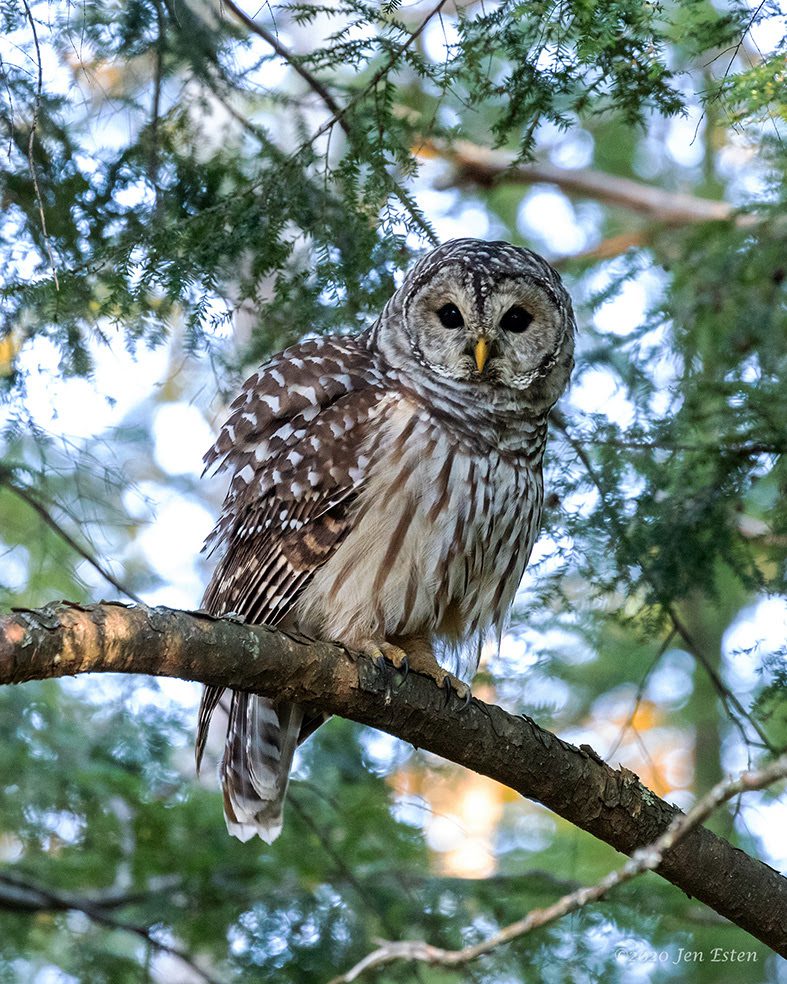 Barred owls are nocturnal, but their busiest time for hunting is just after sunset. They feed mostly on mice and other small  mammals, as well as birds, amphibians and invertebrates; even fish. Like most owls, they swallow their prey whole and later regurgitate a pellet containing the undigestible remains – fur, feathers and bones. If you are lucky enough to find a pellet, you can figure out what the owl has eaten by the contents of the pellet. 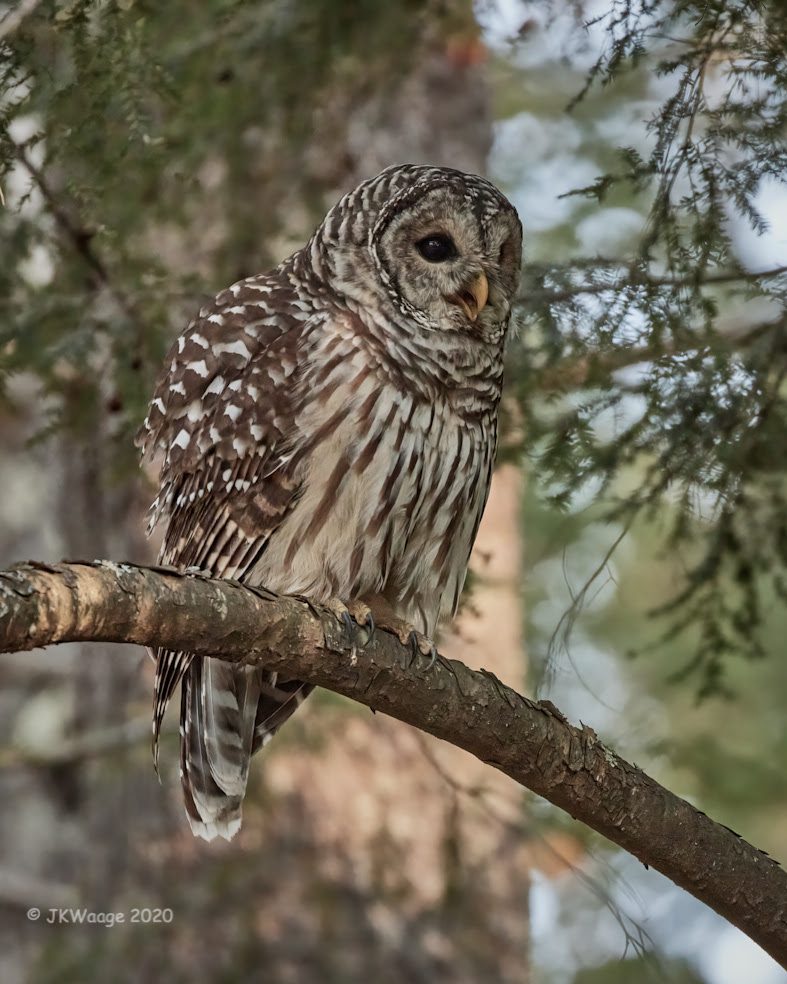 A great time to see an owl is late in the afternoon/early evening as they awaken and get ready to hunt. They often perch on a branch 10 – 30 ft off the ground near an open area. This Barred Owl was spotted in a friend’s back yard just before sunset.

You have likely heard them vocalizing at night in the woods near your home. They sing “who cooks for you, who cooks for you all”.  They also have a raucous call between mates that sounds amazingly like two monkeys!  You can listen to a variety of Barred Owl sounds here.

As days shorten and temperatures fall, waves of migrating birds are passing through the watershed on their way south. Our backyard near the lake is mostly meadow and many are stopping to find seeds, insects and to take a bath. They can be hard to identify since they are no longer in breeding plumage.

The immature Common Yellowthroat male (below) is just getting his black mask as it migrates southward. Yellowthroats breed all across the US and Southern Canada and overwinter in the Carribean, Mexico and Central America. We know they breed in Turtle Cove and probably lots of places in the watershed. There are year-round populations in the Southeast as well. 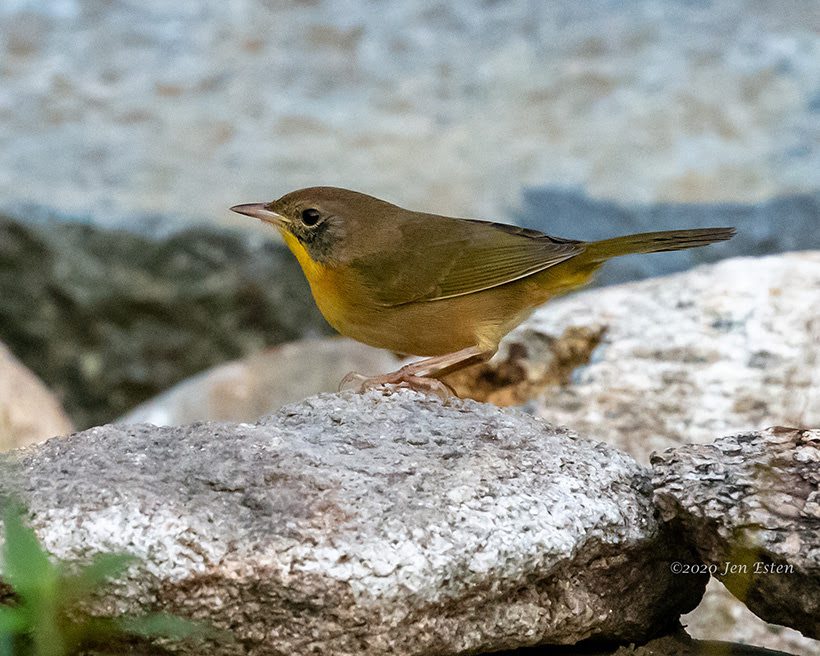 Pine Warblers (below)  breed in pine forests during the summer and head for the Southeast for the winter. There are also year round populations in Southeastern pine forests. 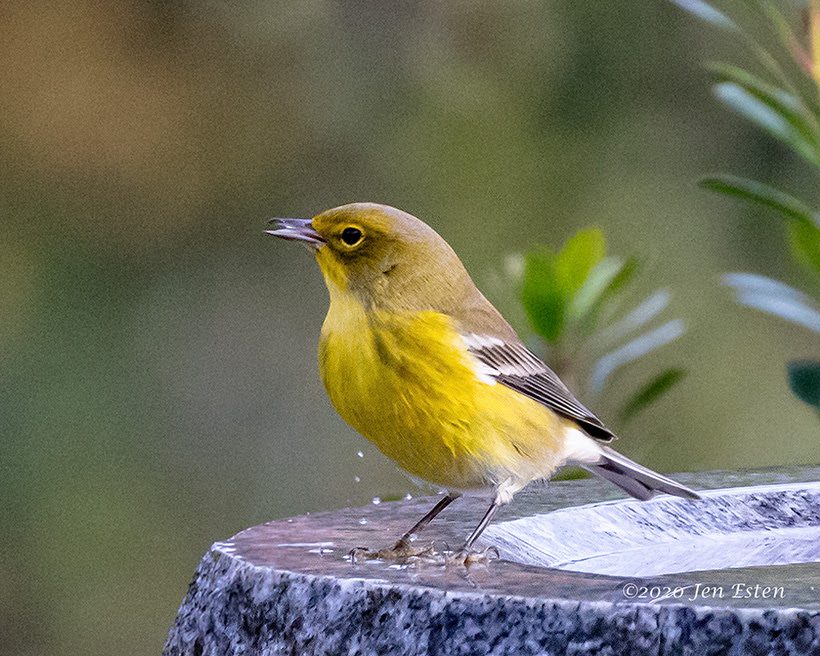 One warbler moving through now has a spectacular migration! Blackpoll Warblers (in its yellowish fall plumage, below) breed in the northern forests of Alaska and Canada. Blackpolls winter in northern South America, making their migration the longest of any North American warbler. Those traveling from Alaska to Brazil cover 5,000 miles!  New England Blackpolls leave from the coast and fly an average of 1,850 miles and up to 88 hours nonstop over the Atlantic Ocean to northern South America.

In order to make this amazing trip, they nearly double their weight and leave when the prevailing wind can assist their journey. Migrating warblers often depend on Fall berries with very high fat contents. Sadly, coastal and island populations of these types of berry bushes have declined because they are considered unattractive weeds. Just another example of habitat loss that has non-obvious but with serious affects on bird populations. 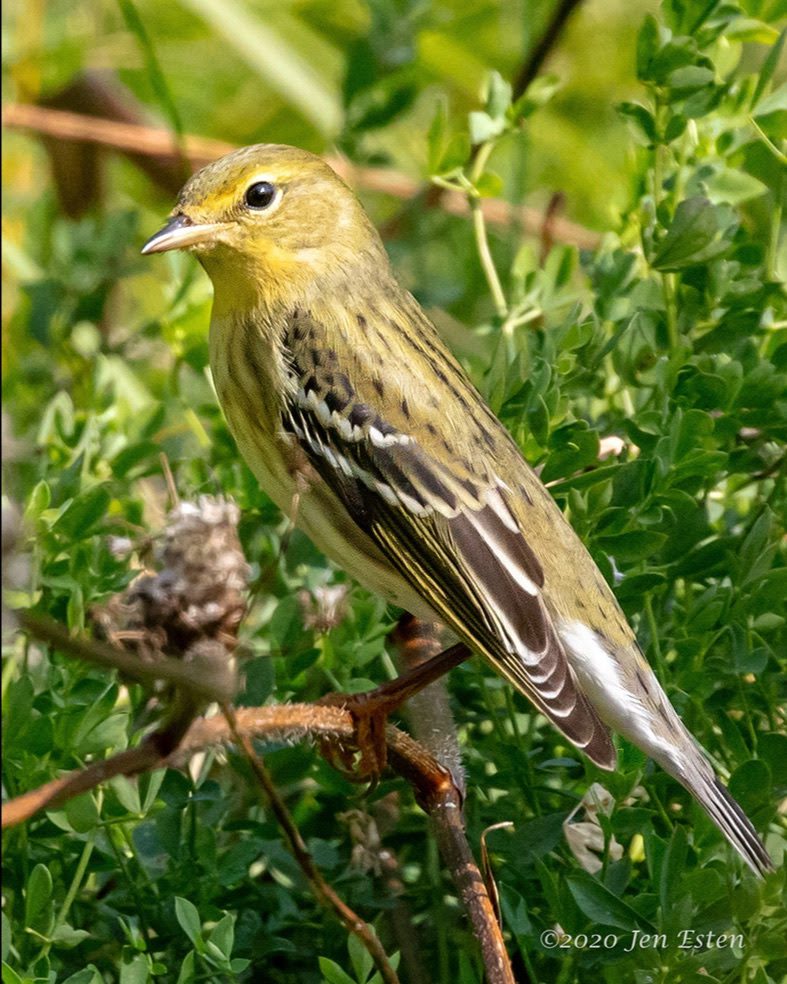 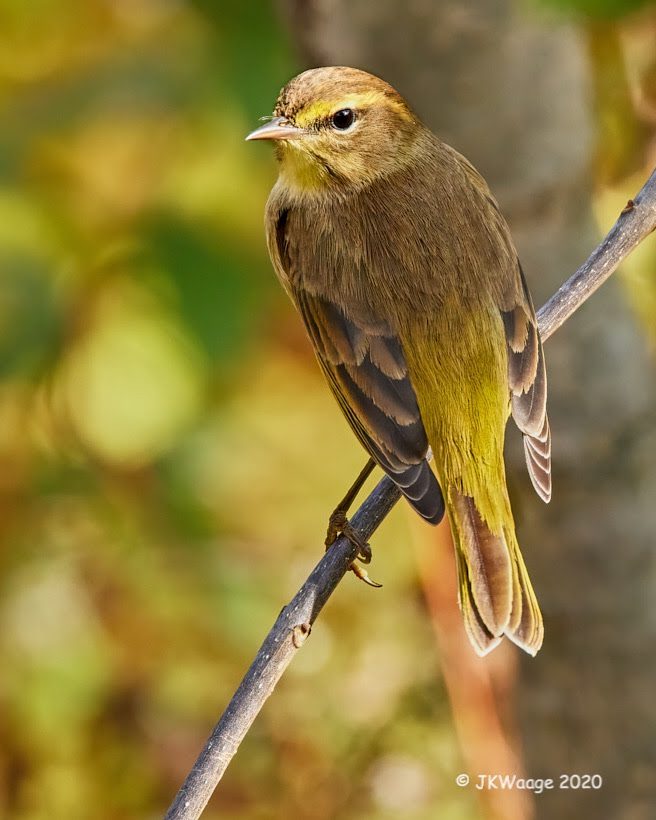 Palm Warblers (above), belying their name, breed in the coniferous forests north of here and winter mostly near the Gulf Coast and in the Caribbean. If you, too, are a “snowbird”, Palm Warblers are very common in Florida and easy to see and identify. They spend much of their time walking on the ground, revealing their bright yellow underparts and wagging their tails. 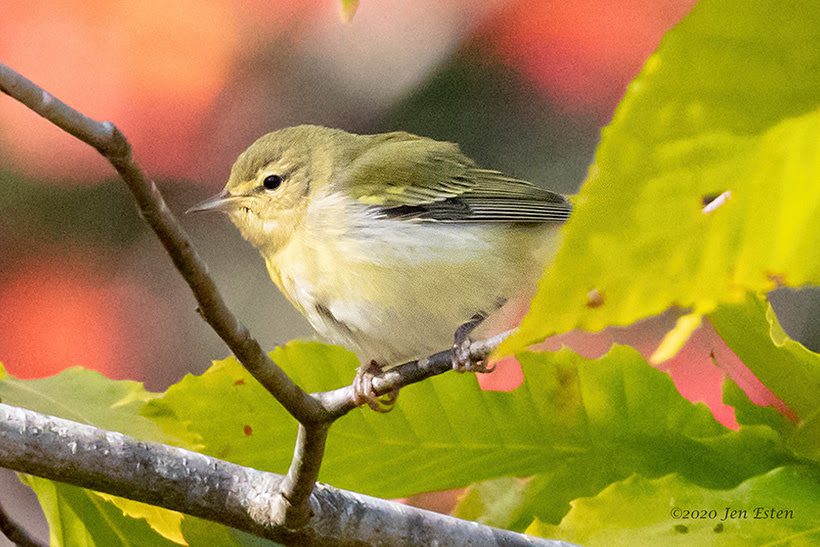 Considered a ‘Rare Bird’ for our area in October, the Tennessee Warbler above was an exciting find in our yard this week! They breed in the boreal forests of Canada and the very northern edge of the US. They specialize on eating spruce budworm caterpillars, so in years of spruce budworm outbreaks, Tennessee Warbler populations can dramatically increase. This is a species that benefits from breeding in regrowth after commercial logging.

The photo below is of a Brown Creeper. They are tiny birds, and like a nuthatch, hunt for insects on the trunks of trees. While nuthatches go up and down tree trunks, Brown Creepers only go up. Upon reaching the top of a tree, they fly down to the base and work their way up again. Unlike the other birds we are showing, this one is here year-round. Creepers are every hard to find since they blend in so well, but spending time where there are mature and dead trees may turn one up.They are here all winter. 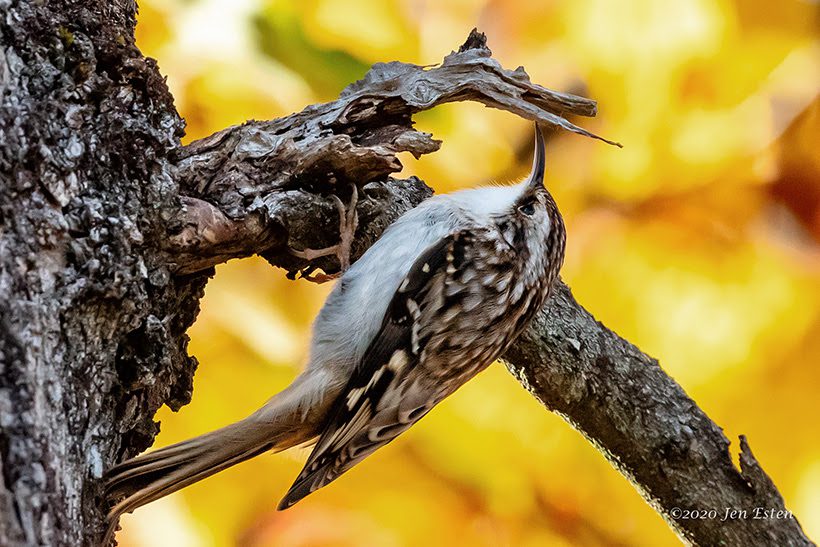 All of the songbirds so far are insect eaters; even in the fall. Sparrows feed their young insects but eat seed most of the year. We may tend to ignore these “little brown birds”, but look closely. They can be quite pretty. Below are two common local species and a rare visitor.

When you hear a bird singing brightly along the edge of Pleasant Lake, it is most likely the Song Sparrow (hear the song). They are recognized by a boldly streaked breast with a central dark spot. Many pairs breed all along our shoreline. They are inquisitive birds and will often come out to investigate if you try “pishing” (making a ‘psssh psssh psssh’ sound). 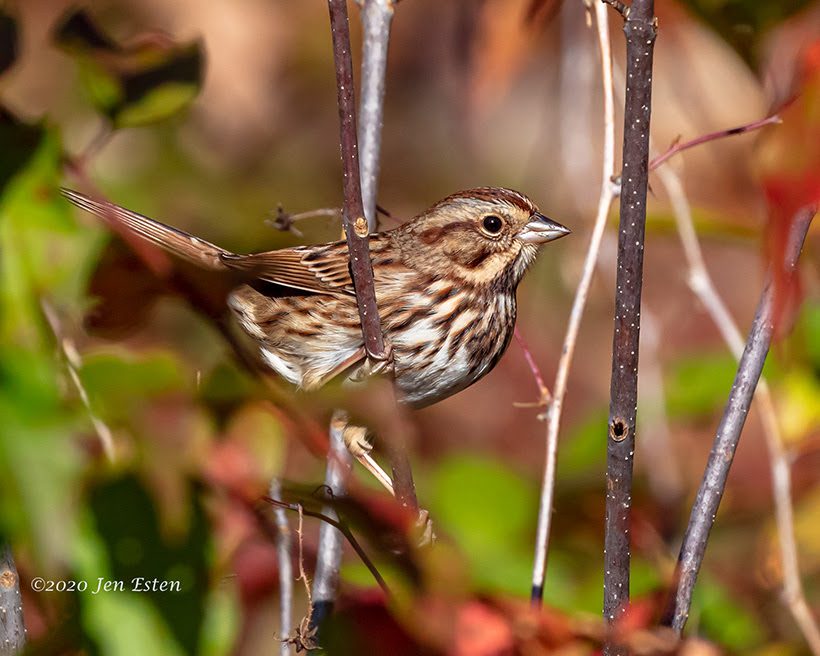 Chipping Sparrows (below) have a rather plain breast and a distinct white line above the black eye-stripe. Some birds have a bi-colored bill (dark above and yellow below). Look closely for a wide variation of the color brown. Very few places in North America south of the Arctic lack Chipping Sparrows in the summer; but they all head to the Deep South of the US and Mexico for the winter. Around here they love wood edges around fields. 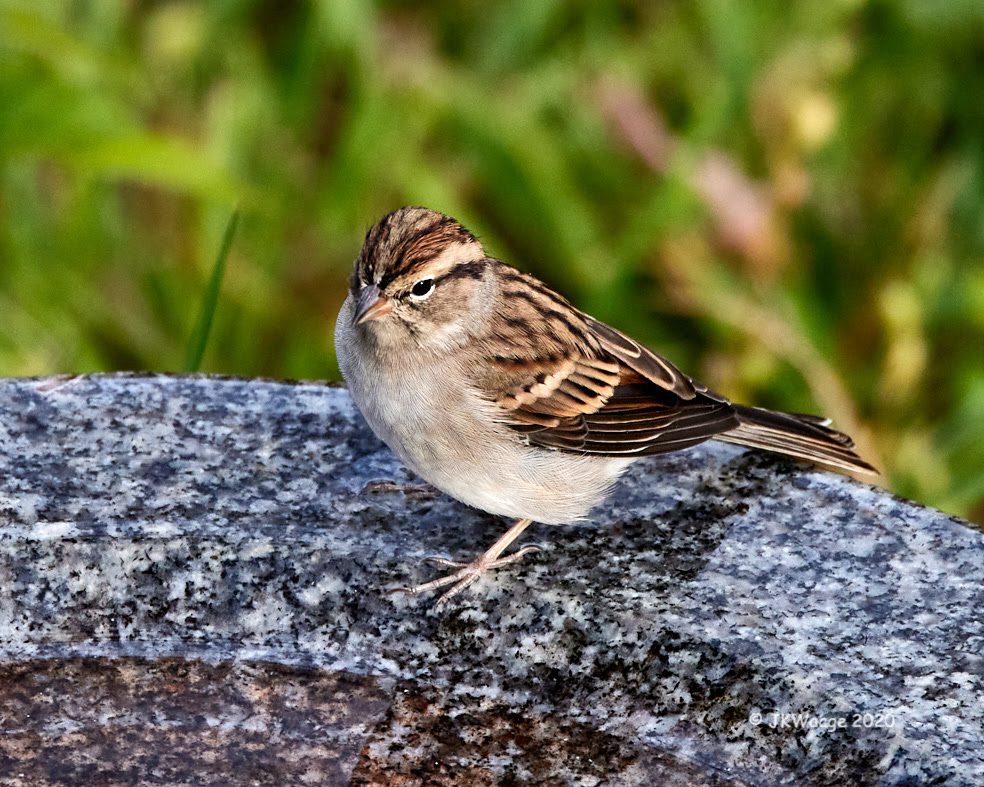 The Lincoln’s Sparrow (below) is a small, pretty sparrow with a clear white belly and fine black streaks on a buff colored chest.  It is an infrequent visitor here during migration. The only area in NH where they are known to breed is in the boggy, moss covered habitats of Coos County. They mostly spend their winters in south-central US and Central America 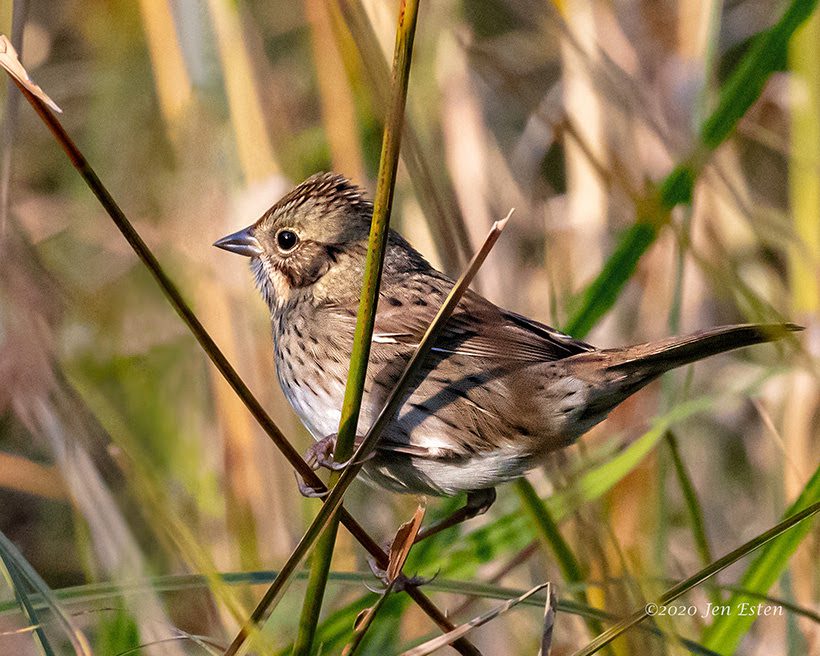 Despite the days getting colder, a great place to watch birds now is at a birdbath. If there are bushes or trees nearby for safety, lots of birds will use them. We have had fun watching sparrows and bluebirds at ours. 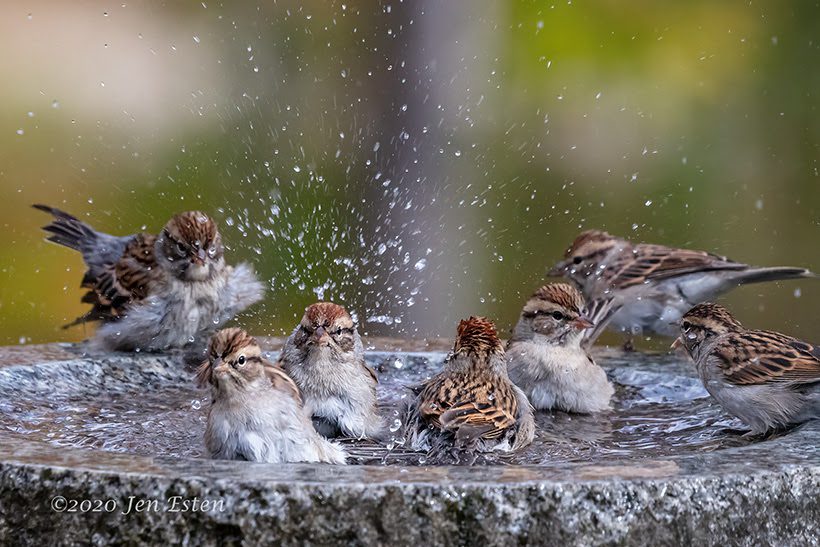 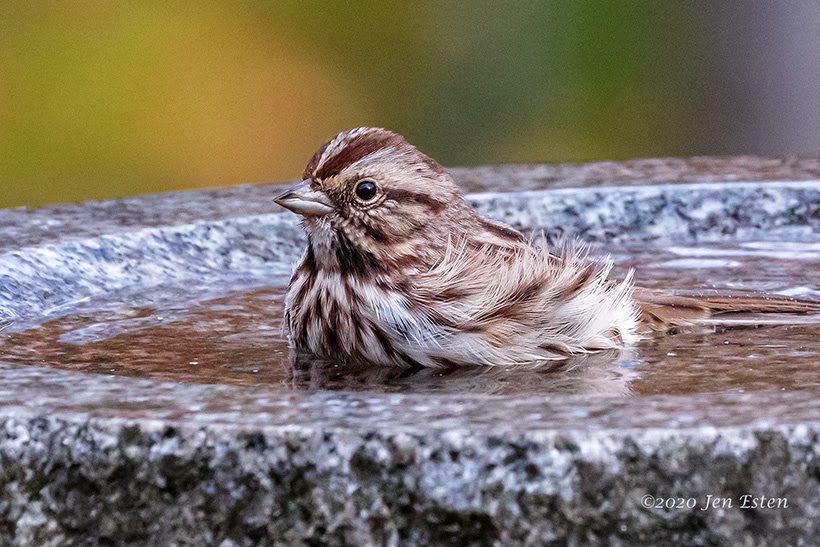 The real treat has been a group of bluebirds. They are summer visitors north of Massachusetts and are on the way south for the winter. Hopefully they will come back next summer to kick the wrens out of our Bluebird boxes!

Male (below) and female Eastern Bluebirds are easy to distinguish by coloration and both are always a welcome addition to the yard. 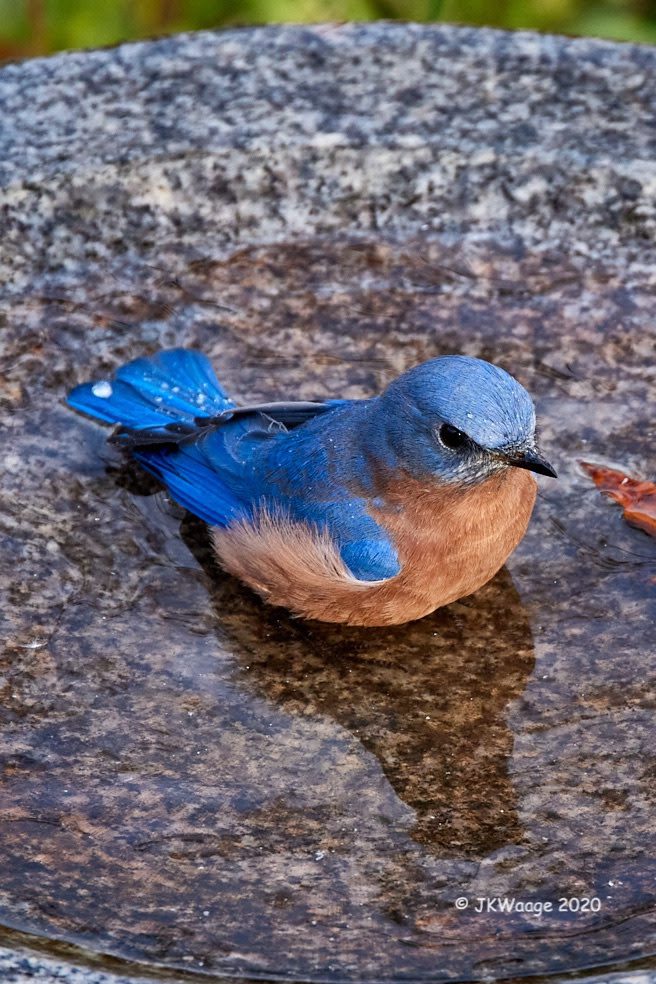 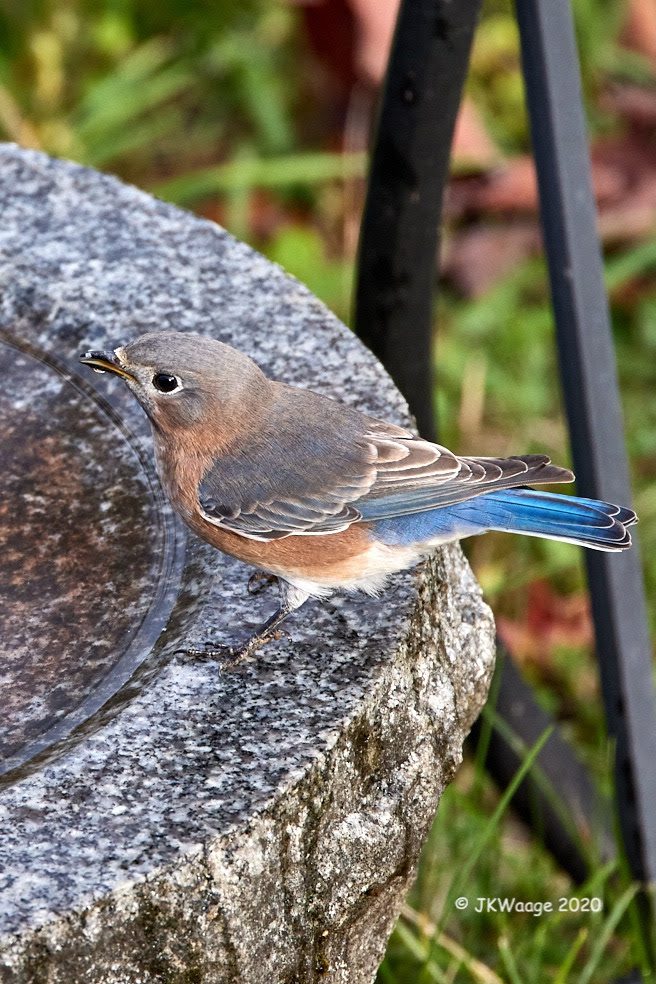 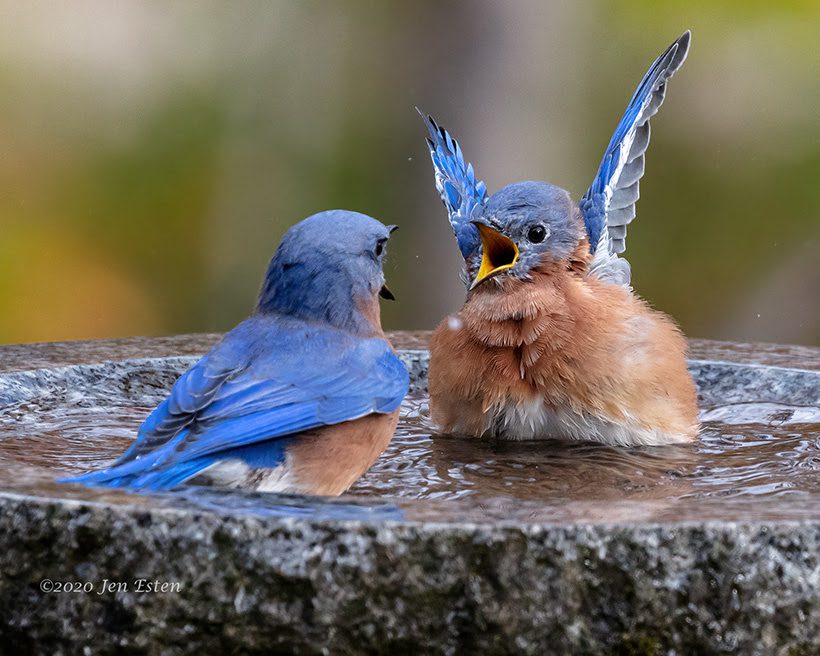 All Words and Photos by Jen Esten and Jon Waage