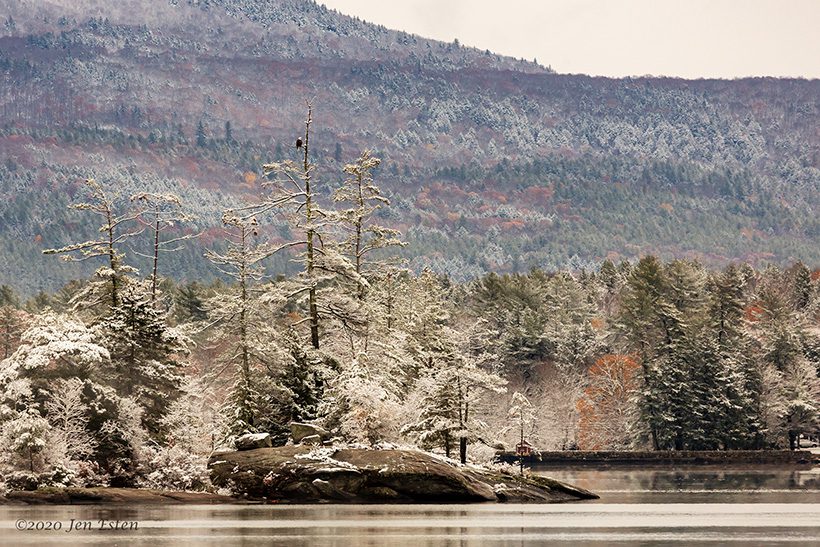 When we arrived on May 18, there were already two eggs on the nest.  John Wilson had seen the parents on the nest on the 13th of May. This is their 14th year breeding on the lake (more details at end of this post). 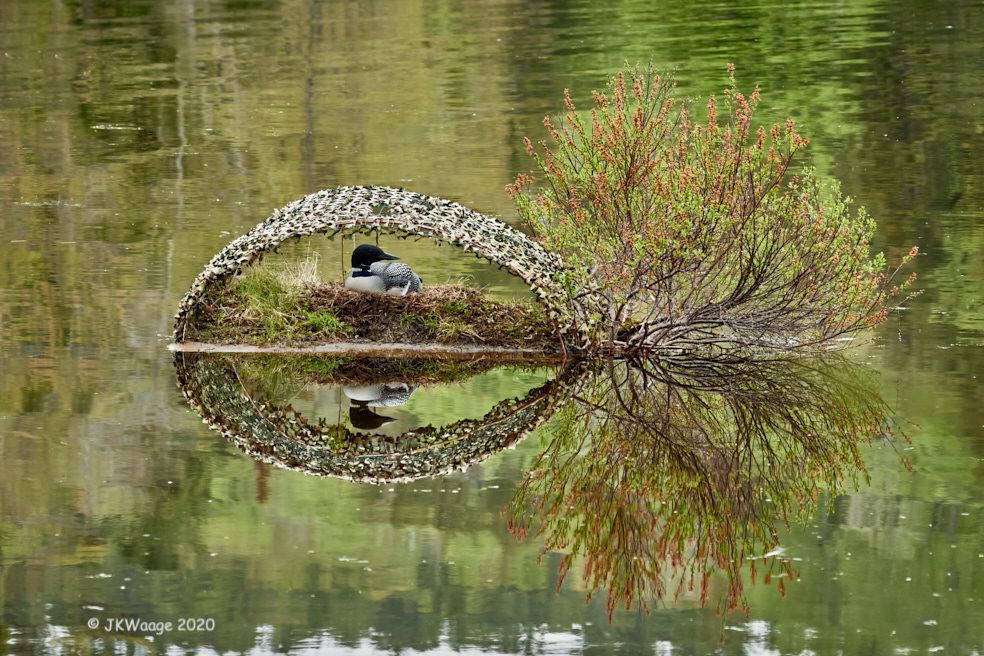 It has been a tough year for the loons. Sitting on the eggs was often interrupted early on by a nasty blackfly season which seemed to peak around the end of May. 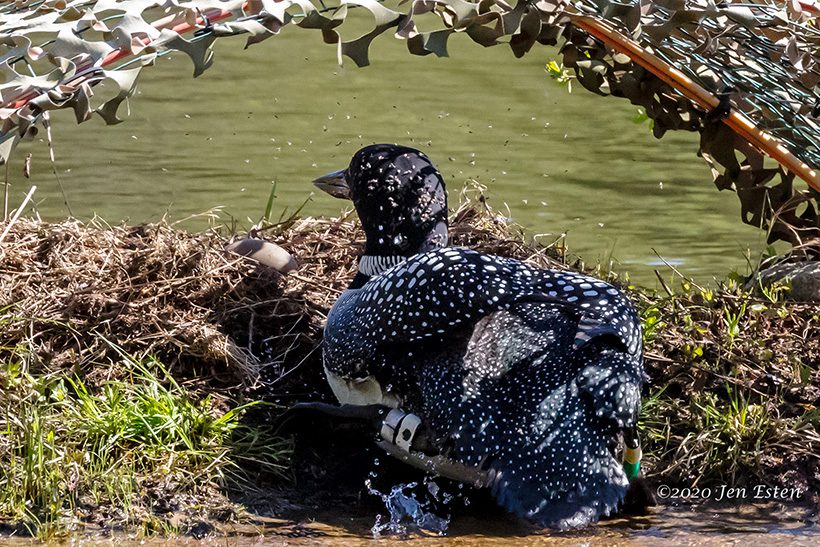 For most of the spring and summer there have been frequent visits by other loons as well as adult and juvenile eagles. All have taken time and energy away from the parents.

Below, our parents are dealing with a visiting loon. There are more and more loons looking for prime breeding sites like Pleasant Lake so our parents are spending more time defending theirs. 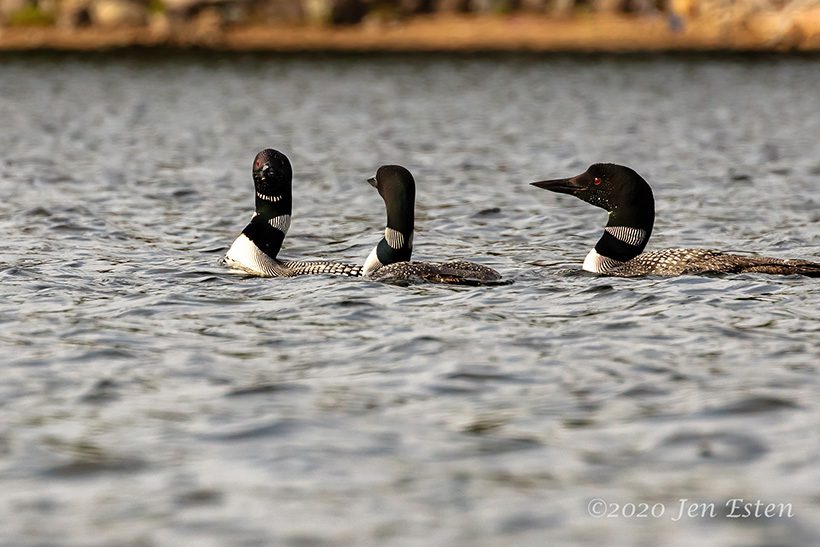 Bald Eagles are a threat, especially to young loons. Both adult and immature (photo below) eagles visited throughout the summer. 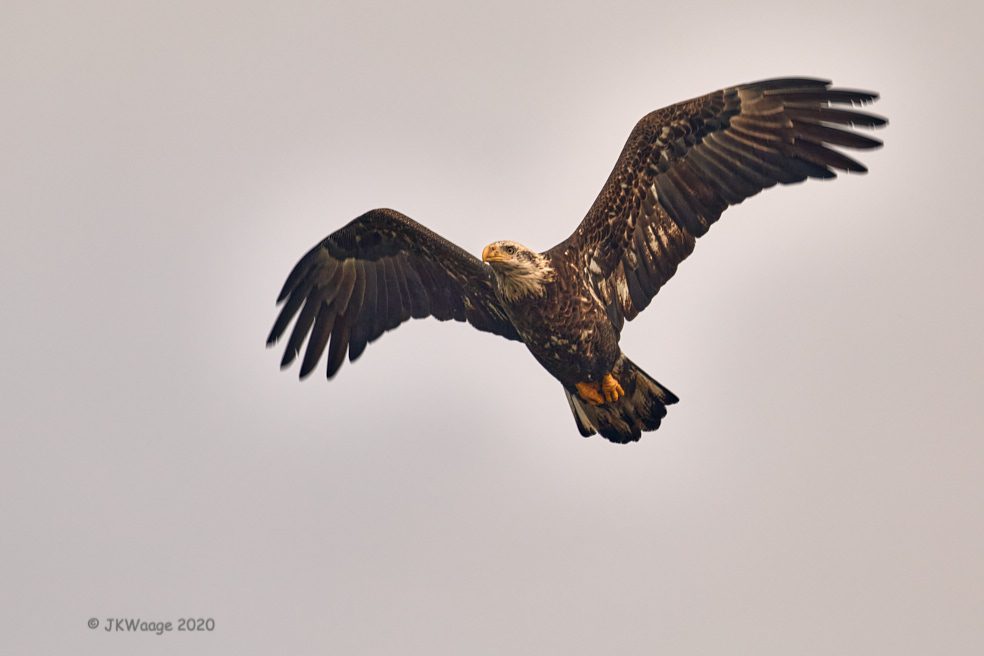 The first loon egg hatched on June 12th and Pablo was soon on the water with his parents. The naming tradition for Pleasant Lake loon chicks has been that their names begin with “P” and the first hatched is assigned “male”. So, we really don’t know Pablo’s sex.

The parents stopped sitting on the second egg within a day and it was collected by LPC on the 15th. Sad start to the season, but good news for Pablo who then received the full attention of both parents from the start. He swam with them from day one, had lots of fish to eat, naps under a parent’s wing, and then even more fish! 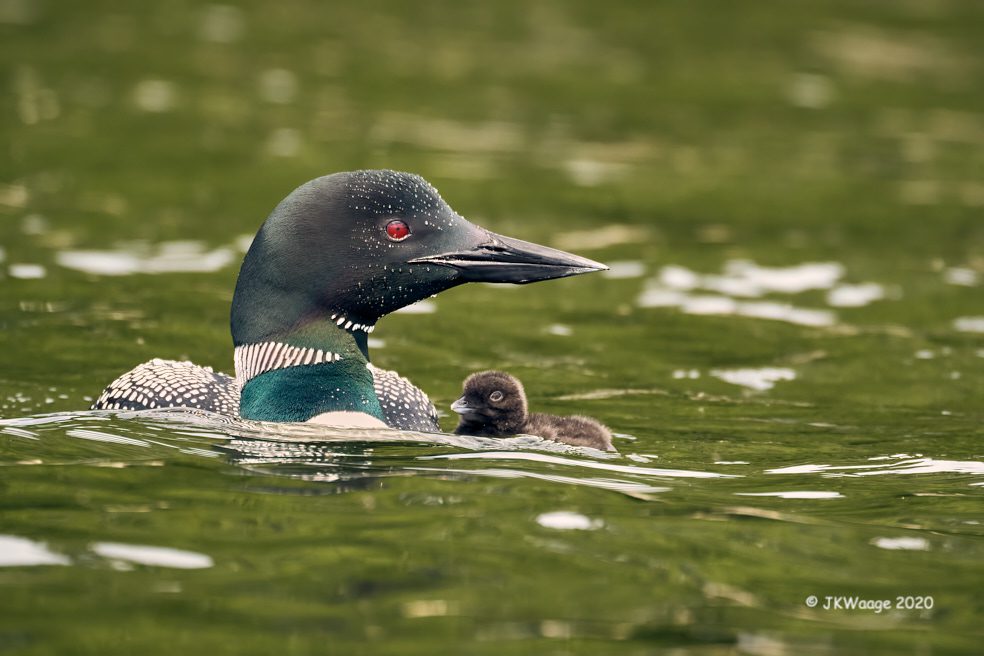 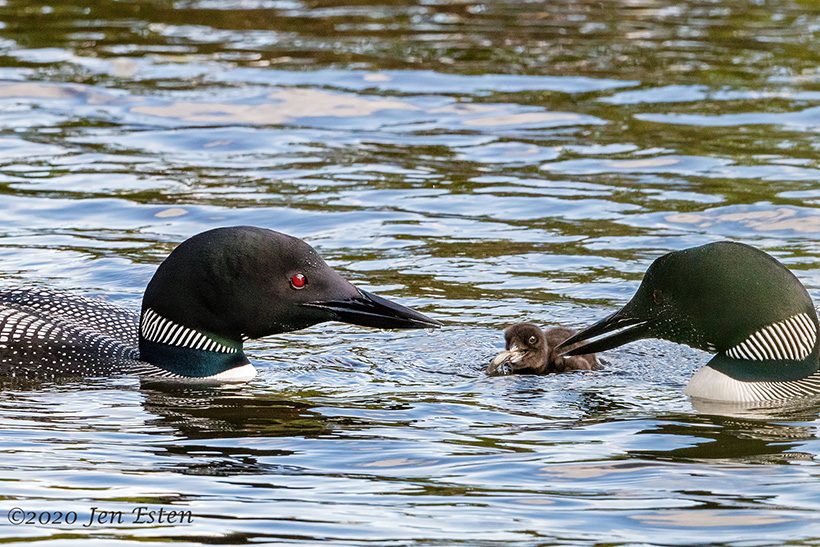 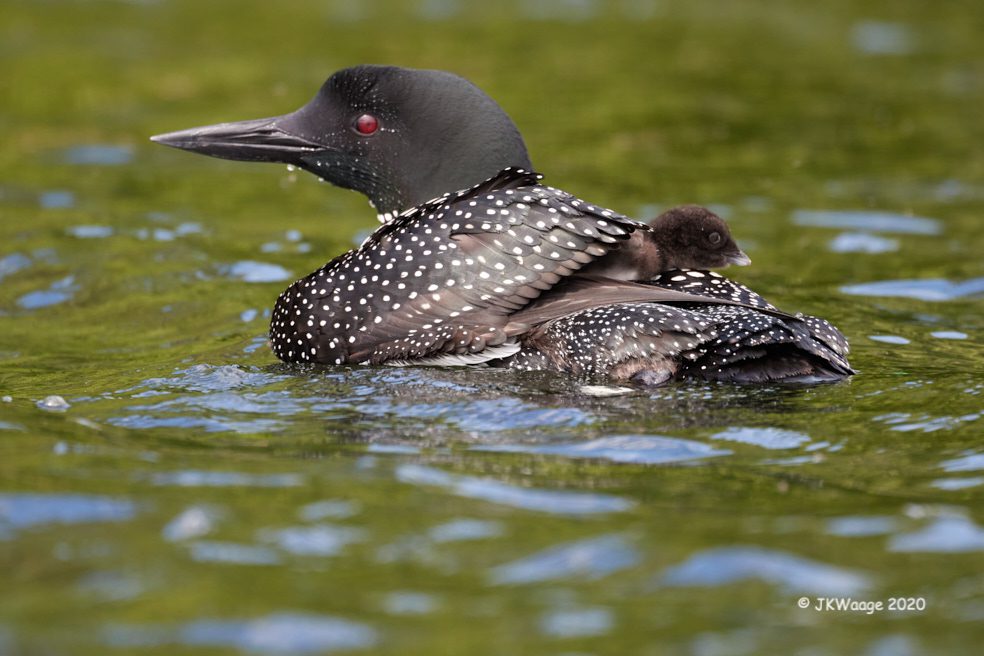 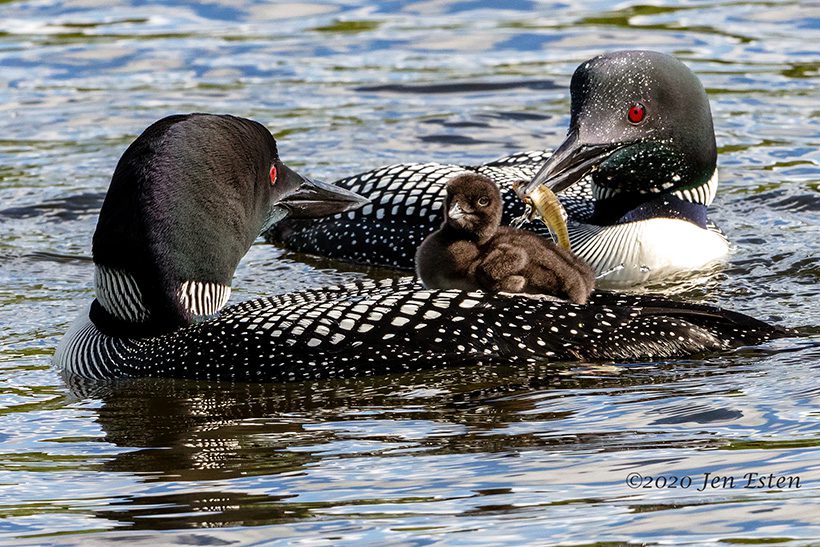 A week later, he was noticeably bigger and getting even more fish. 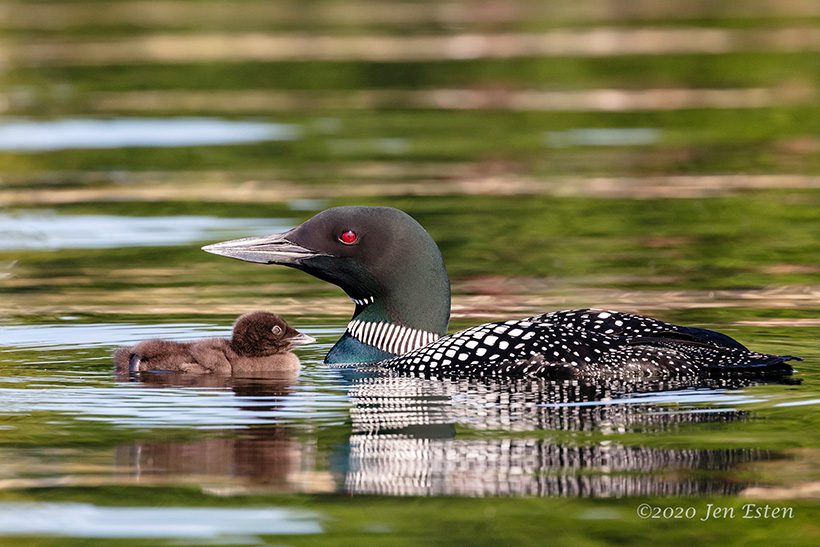 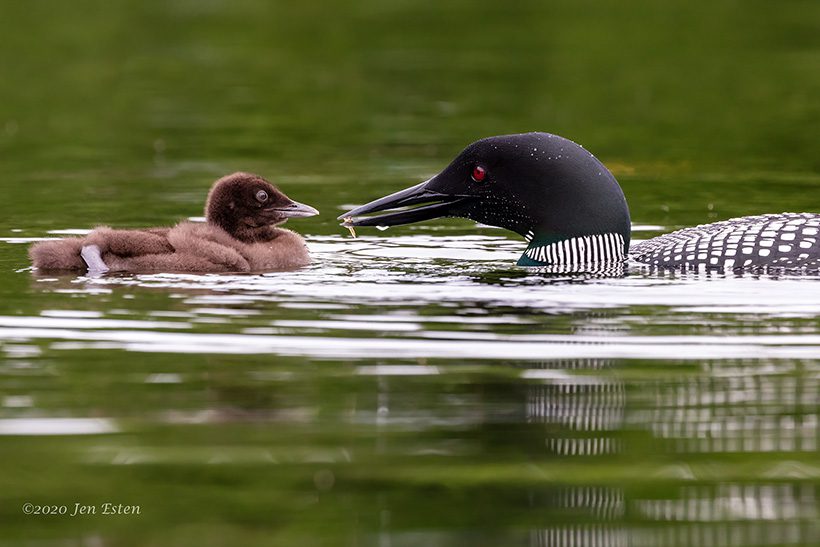 Pablo was exercising his wings by July 1st and looking a lot more like a loon by July 7th. 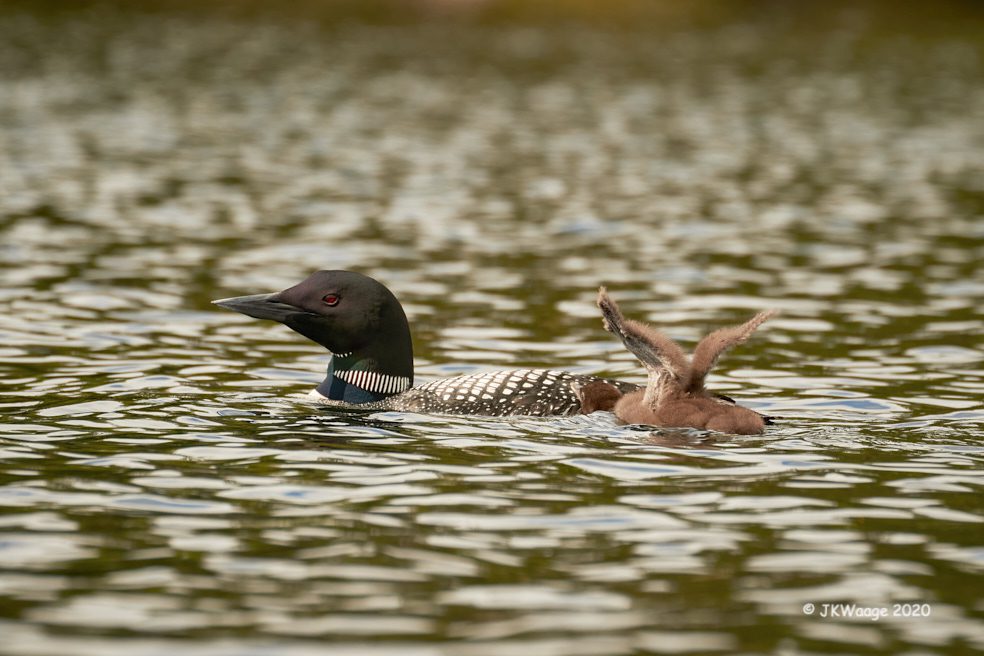 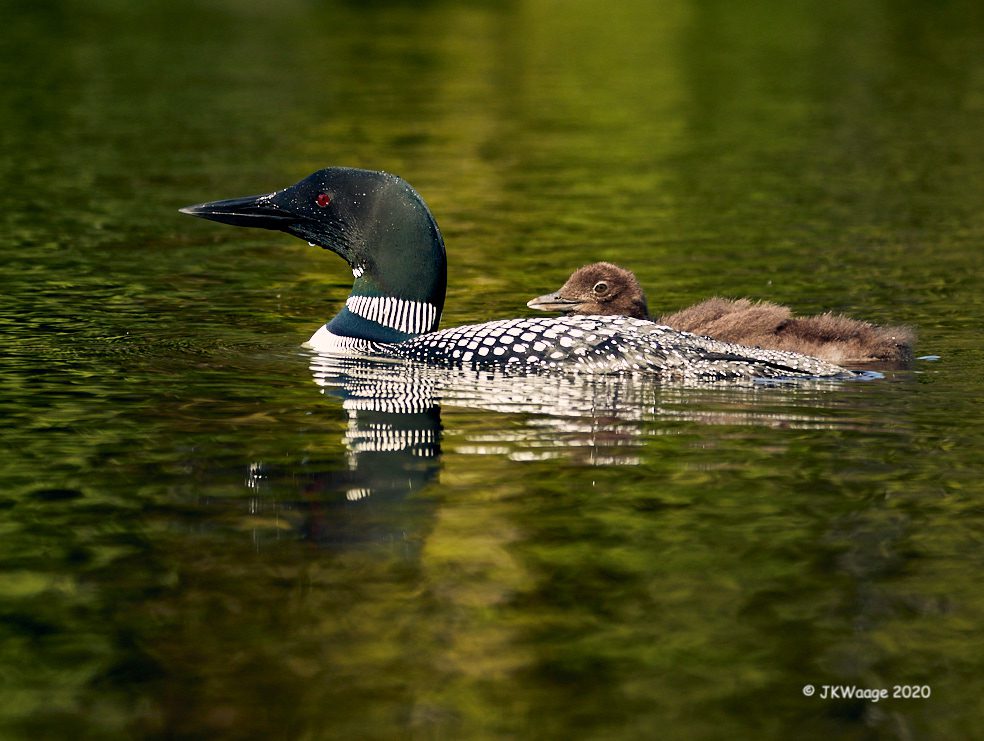 A month after hatching Pablo had a full coat of “baby down” and was about 1/3 the size of his parents. 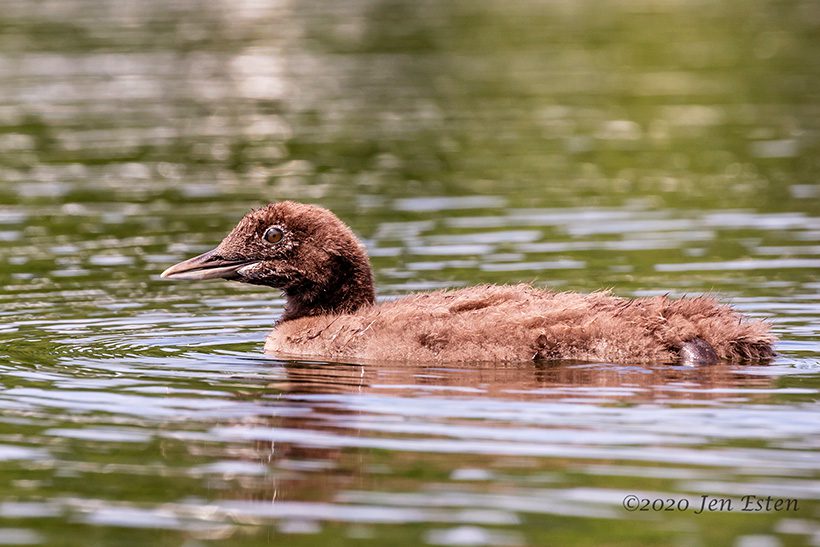 Ten days after the last photo, and still growing, he began molting into juvenile plumage. 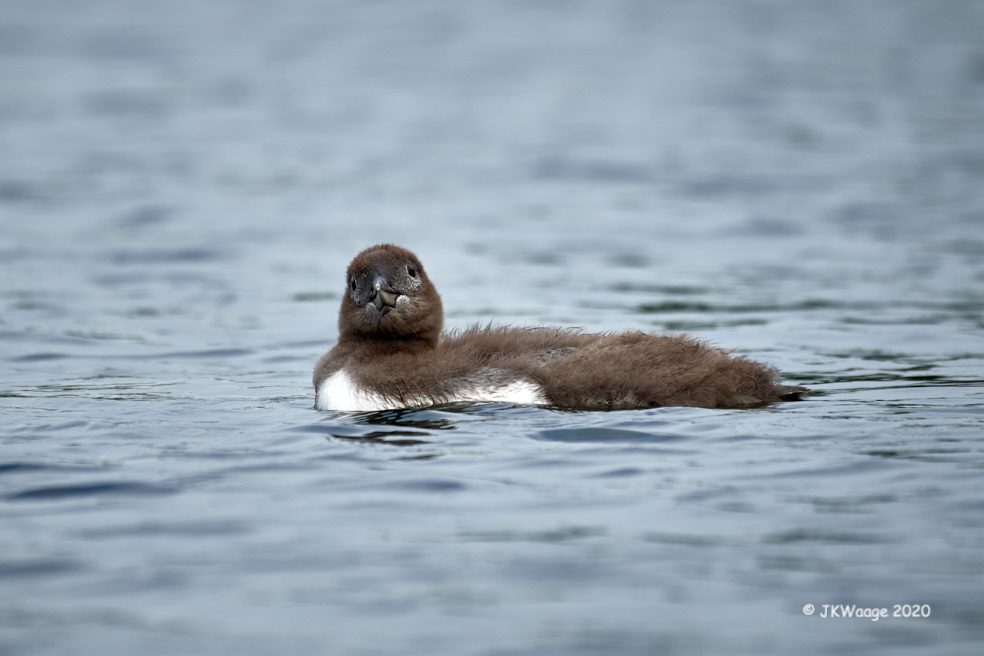 By August 13, only a few traces of “baby down” remained. 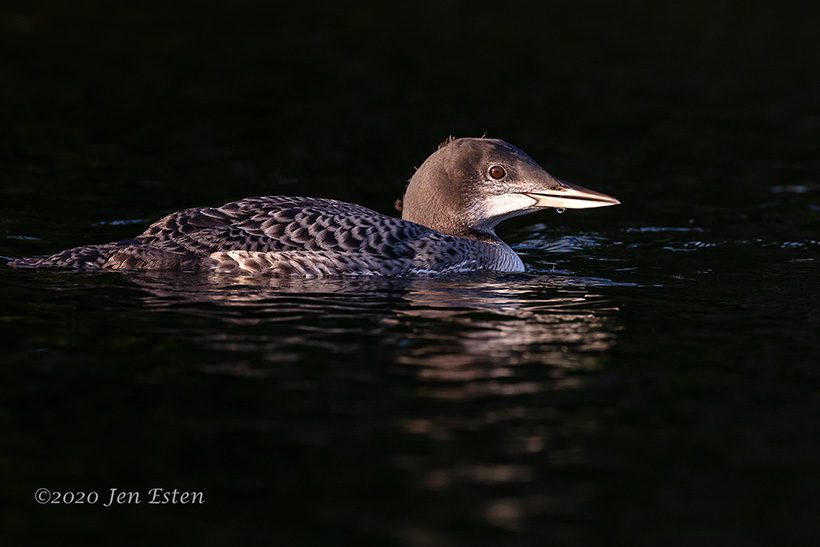 By mid September he was almost full grown, diving, taking short flights and looking quite handsome. 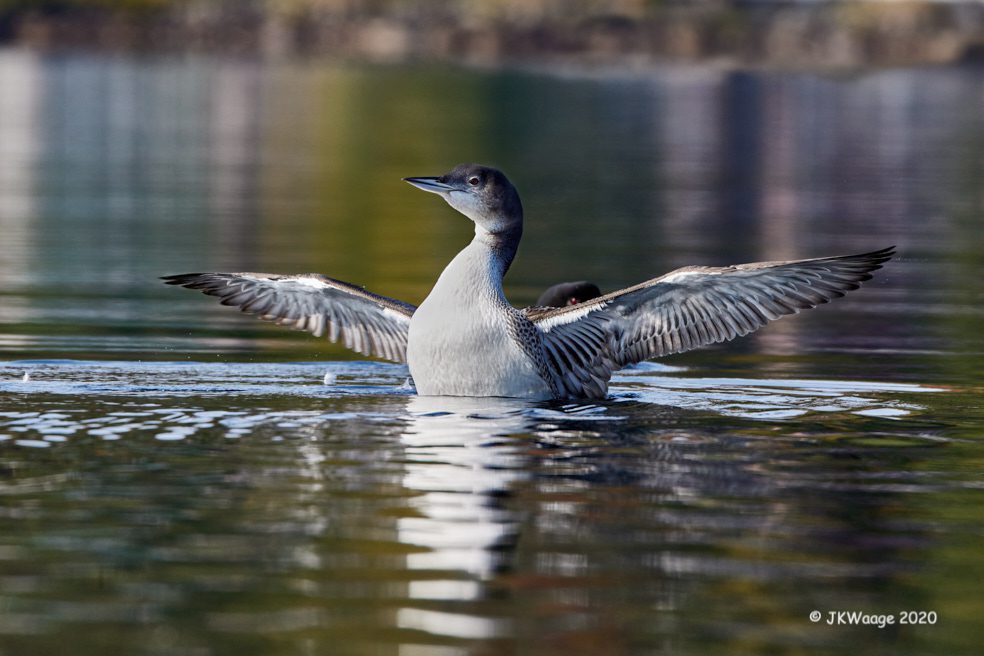 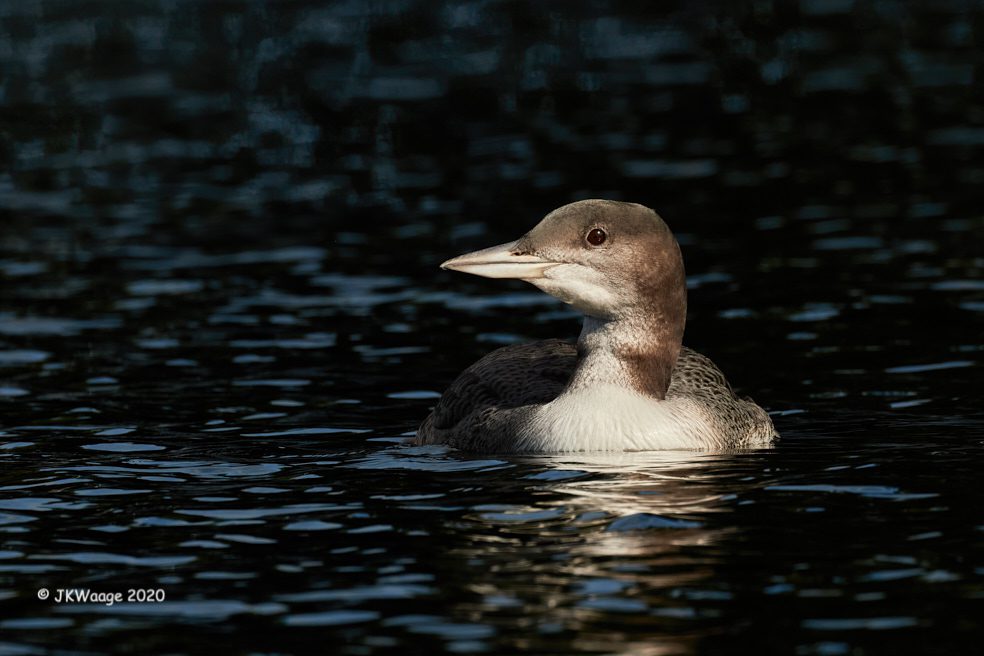 But, still pestering his mother for food… 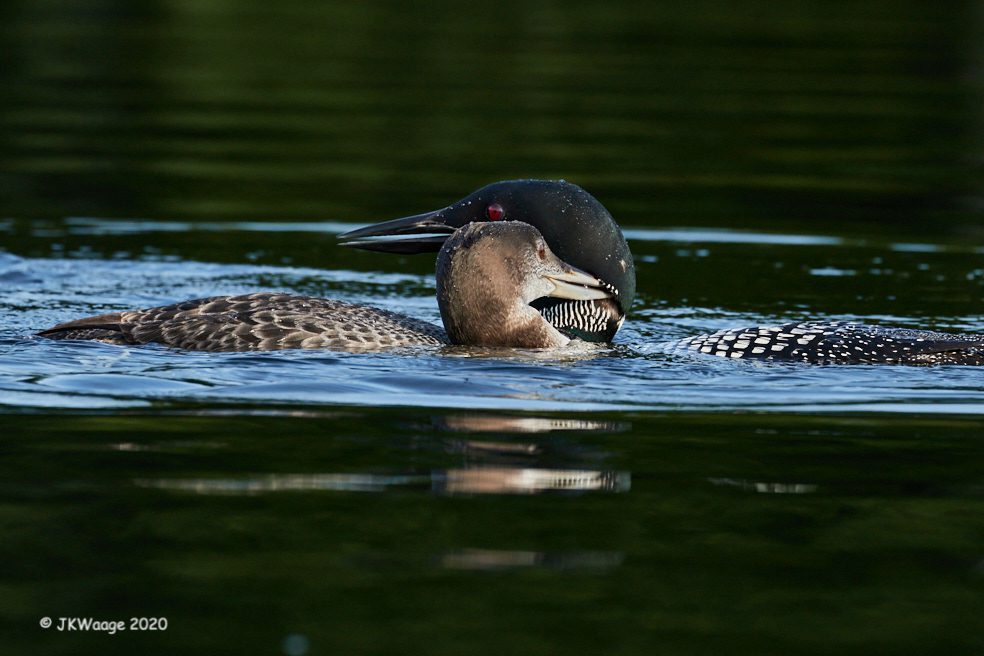 The previous three photos were taken at the end of September. Both Pablo and his parents were being seen all over the lake. All three periodically spent time away from the lake. The next photo of Pablo and his mother was taken on September 26th. It is our last photo of him on the lake this year. 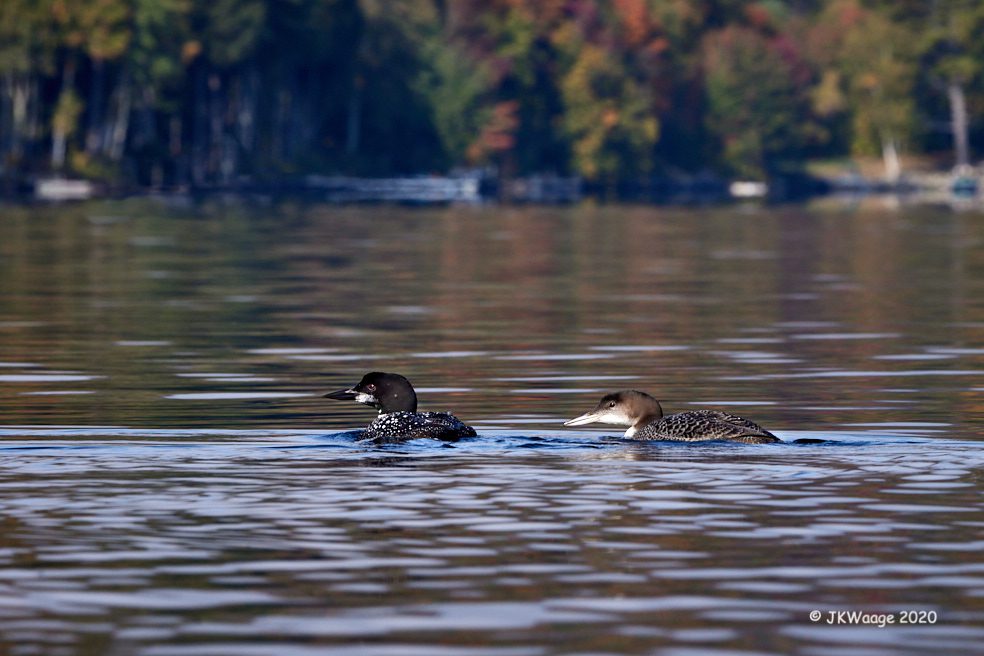 The last time we saw him was on October 6. We kept surveying the lake through the end of October. We saw both parents frequently through October, but not Pablo.

We recently learned that Pablo was seen, alone and fishing on Pleasant Lake, early in November. We assume he has been visiting other lakes where fishing might be easier. We wish Pablo well on his journey and turn our attention to his amazing parents.

Because our Loon parents and two of their previous offspring are banded,  a lot is known about their history.

The first successful loon nesting attempts on Pleasant Lake since 1980 were in 2003 and 2004. Our current female replaced the existing female on the lake in 2006.  In 2007, John Wilson designed, built, and has continually maintained our current nesting raft.  Our female (below) has used that raft since 2007. 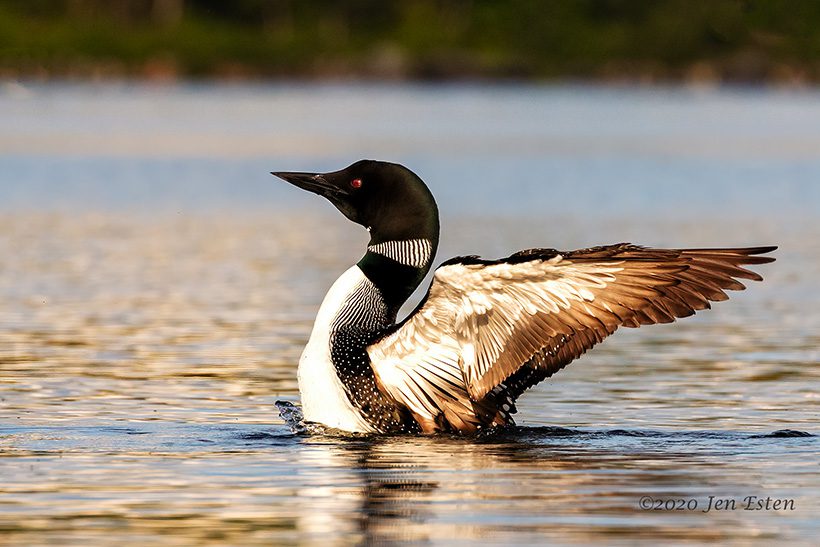 Our female was originally banded on Squam Lake as a juvenile in 2001.  In 2010, she was re-banded along with her mate (below) and their two chicks.  We can now determine definitively that these are the same two Loons each year.

This November, the Loon Preservation Committee has been publishing reports on their Facebook page called “Meet the Banded Loons of New Hampshire”.  Of course our fabulous Loons have been featured!
To quote the LPC Facebook post:

“From 2010 through 2020, she and her long-term mate hatched an impressive 19 chicks, 17 of which survived to fledging age. That’s a reproductive rate of 1.5 chicks surviving per year, which is triple the New Hampshire state average! At age 19, she is still going strong. And, as one of New Hampshire’s most productive loons, we hope that she will remain in our population for years to come.” 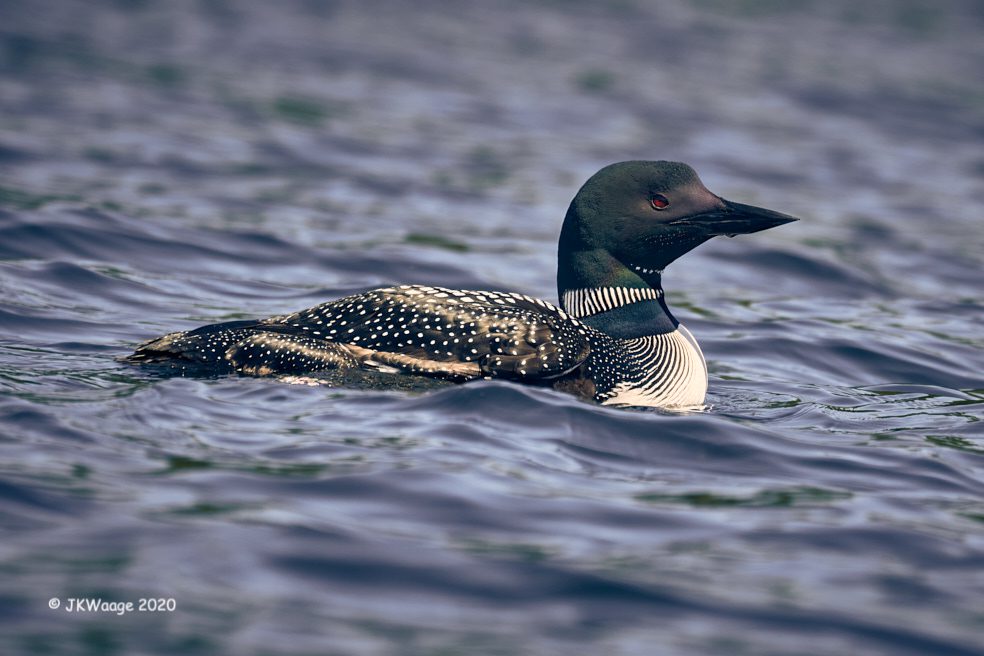 One of the two chicks that were banded in 2010 has been located breeding on a nearby pond in NH.   Again to quote LPC’s Facebook post:

“Since he began breeding in 2015, this loon has proven to be a true rockstar. He and his mate have hatched 8 chicks, 7 of which have survived to fledging age, for a reproductive rate of 1.2 chicks surviving per year (more than double the NH state average). At 10 years old, he is still very young for a loon, and we’re sure that he will continue contributing to our population for years (and, possibly, decades) to come.”

Meet (some of) the Banded Loons of New Hampshire! – Loon Preservation Committee. 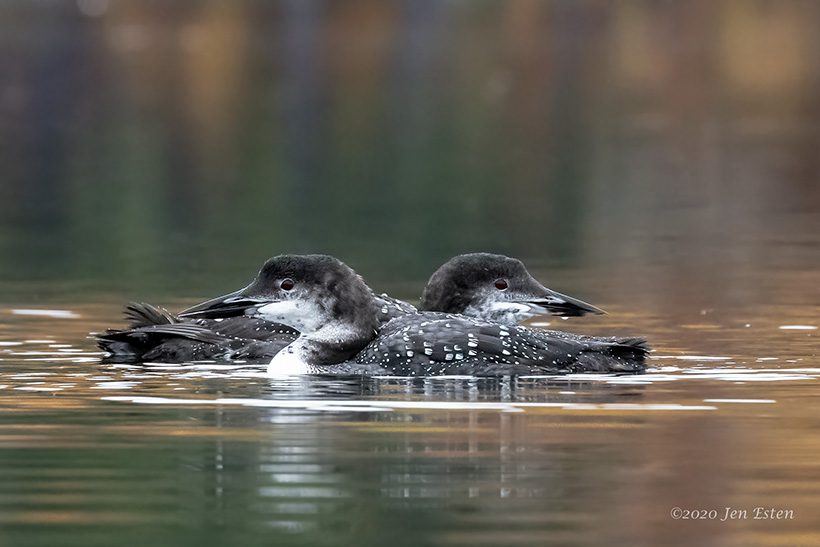 We will be back next Spring to continue the newsletter. On behalf of the PLPA, our goal has been to share what we learn about the biology of this beautiful lake and its watershed. Thanks to so many of you for your kind and encouraging comments. We also thank everyone on Pleasant Lake who has helped us keep an eye (and ear) out for loon activity through the year, and LPC for their continued expert support.

Stay safe, healthy, and have a very Pleasant Lake winter.

Photos and Words by Jen Esten and Jon Waage