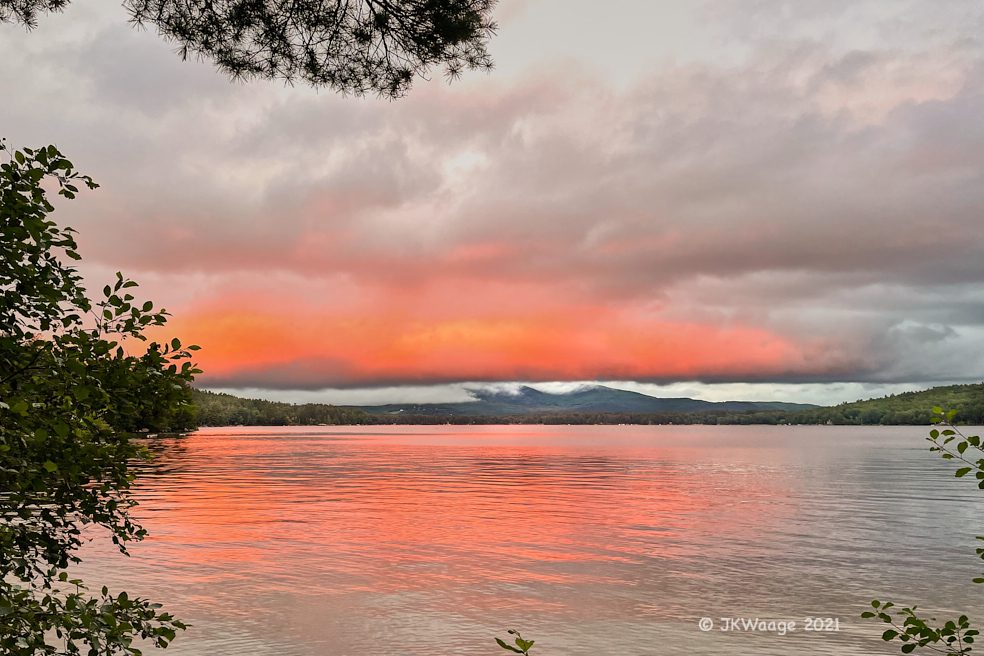 Sunset on July 4th – Nature’s fireworks fading at the end of a dramatic day! This is not an easy issue to write and not pleasant to read, but that is where we are with the Loon saga this year.

As most folks living on the Lake know, there are 4 adult loons on the water, and the two Loon females are still fighting daily. The chick, Paul, and its Father were in or close to Turtle Cove on the 4th and 5th, but as of 6 July the chick cannot be found. The weather has not been cooperative for finding and photographing Loons, but there is still a heart wrenching story to tell.

We pick up the story on June 30 when the chick was with its parents and out on the lake getting food, rides and naps. 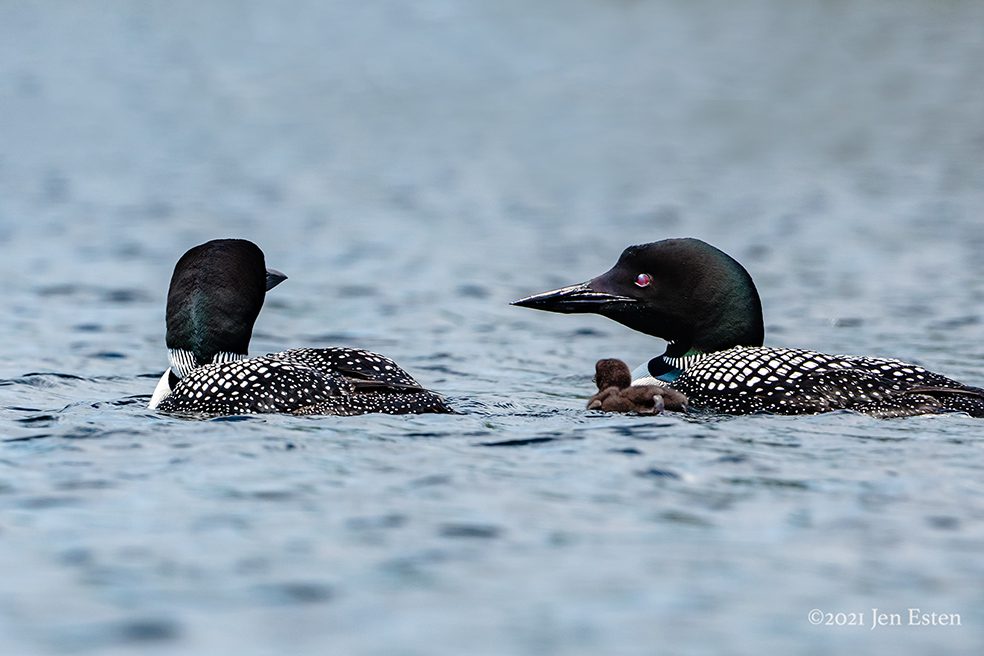 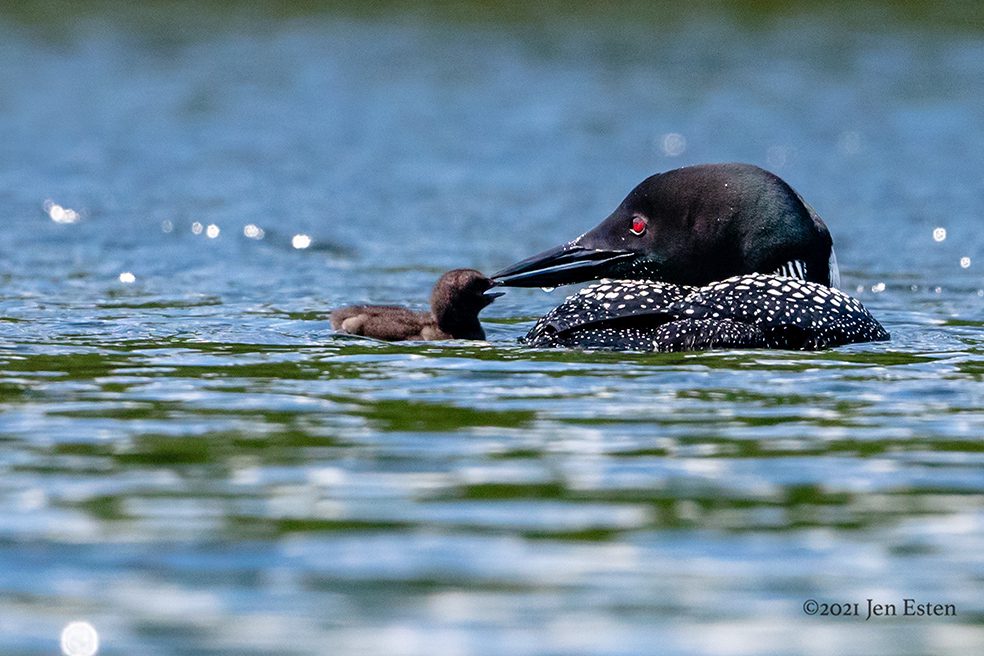 The adults were constantly on the watch for other Loons and calling when one was spotted. The male below is making that loud haunting cry we have been hearing for weeks. 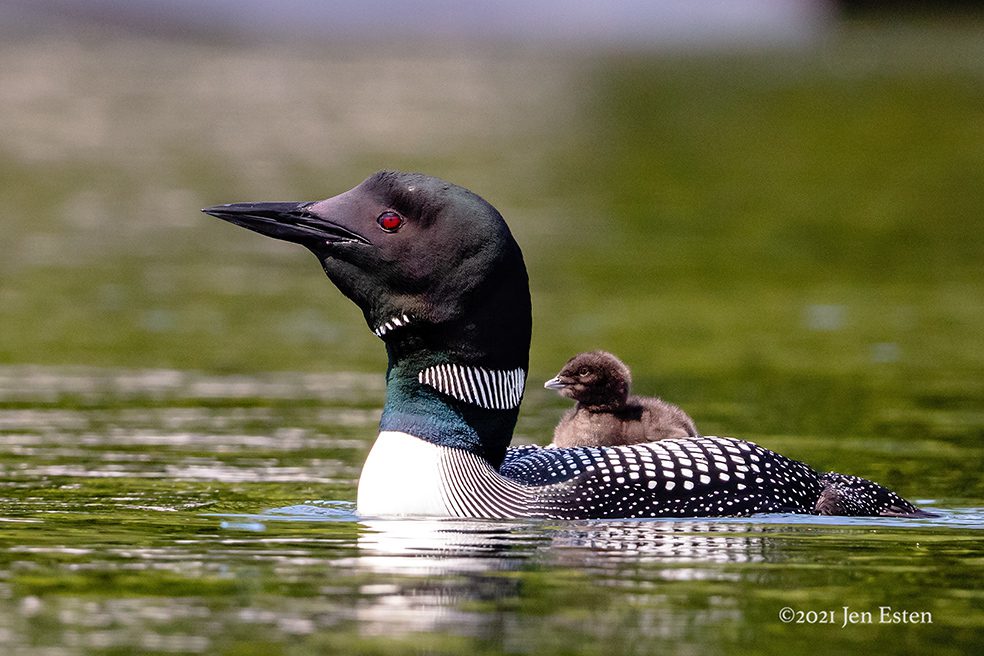 We went to check Turtle Cove early afternoon on the 4th and found both females beginning a major battle. We have chosen a handful of photos to show you the intensity of that interaction.

Most contests start with circling, looking under water and diving. This one quickly escalated to intense sparing. 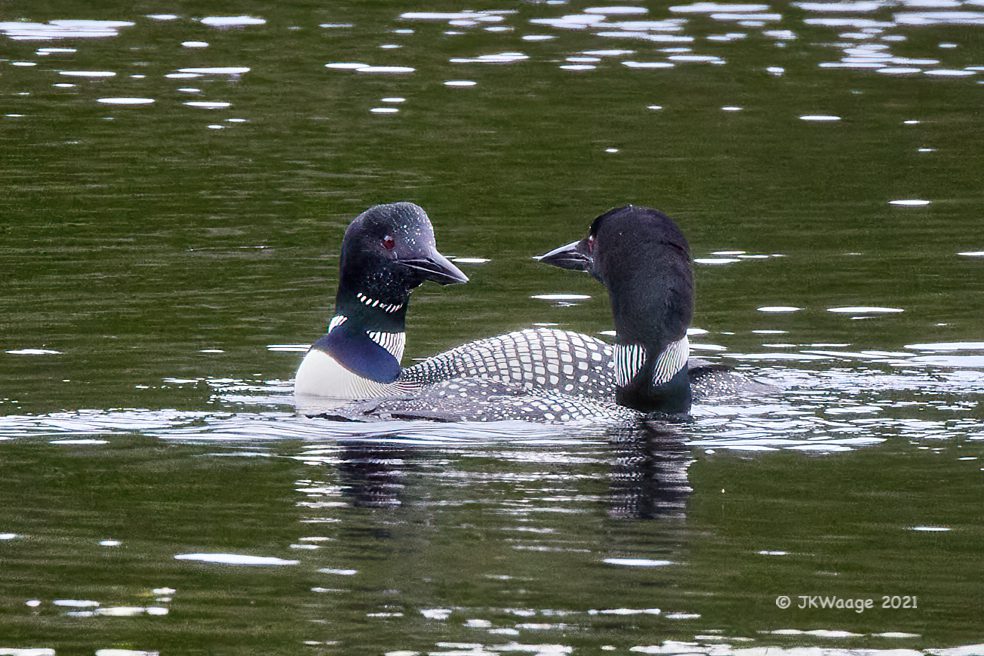 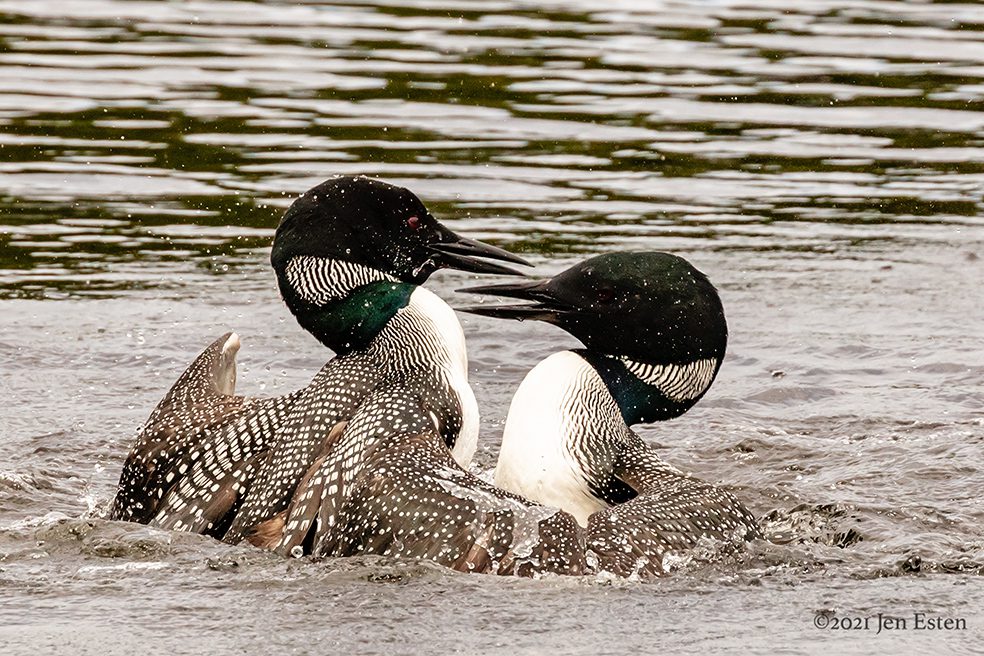 These are powerful birds; the stabbing and grabbing of head and neck was hard to watch. Each had some major strikes on the other. Both came away with more than ruffled feathers. 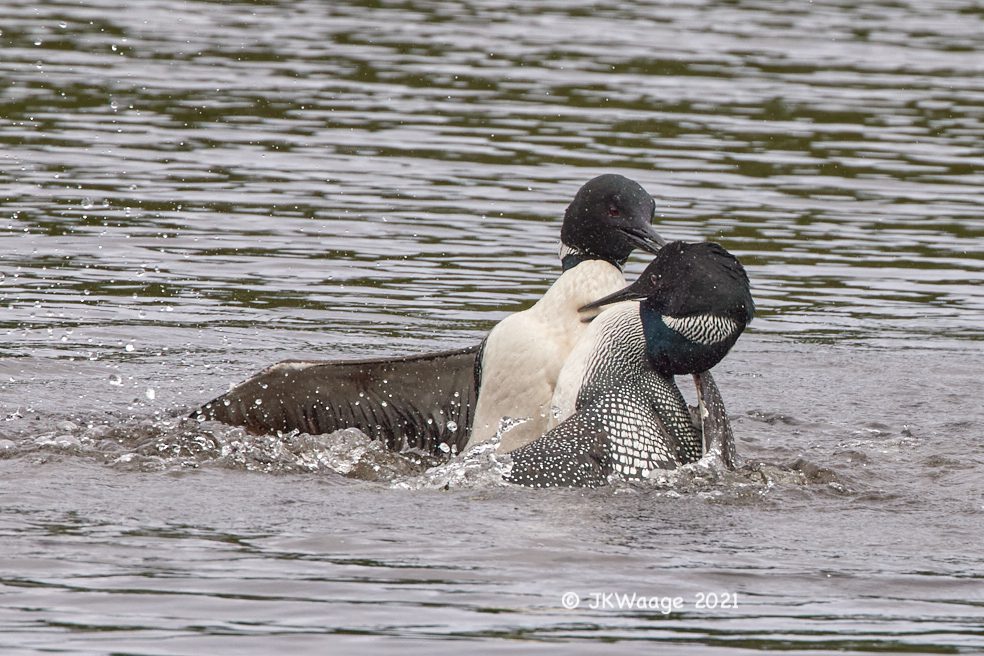 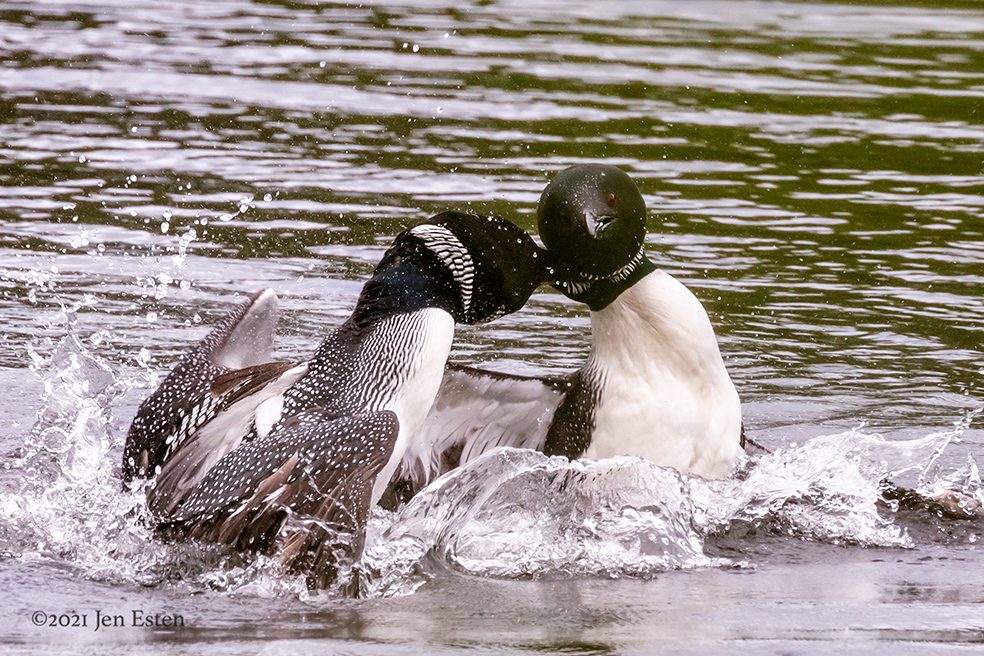 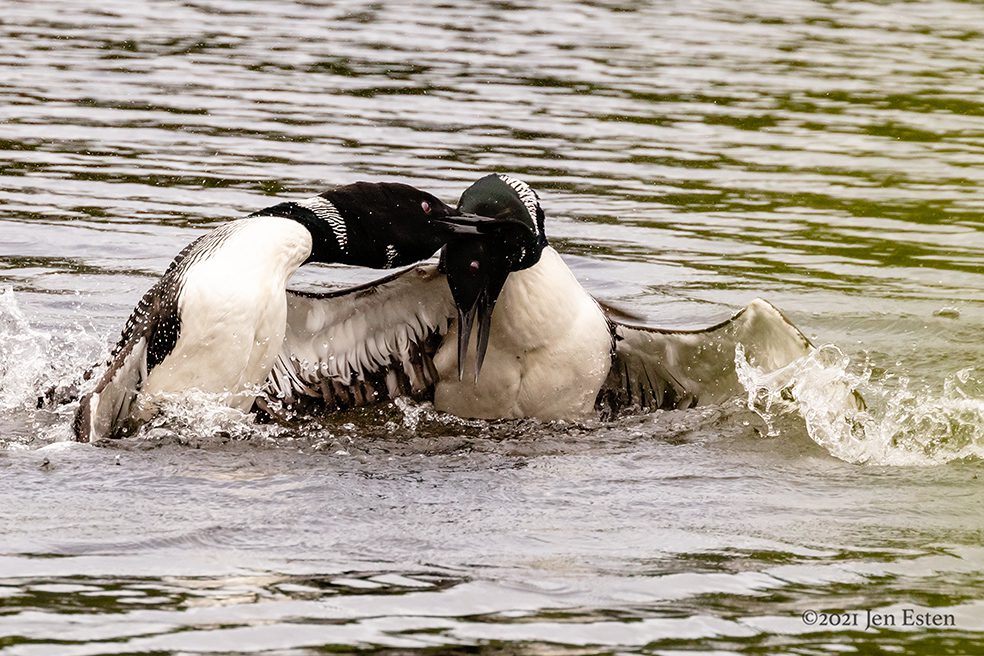 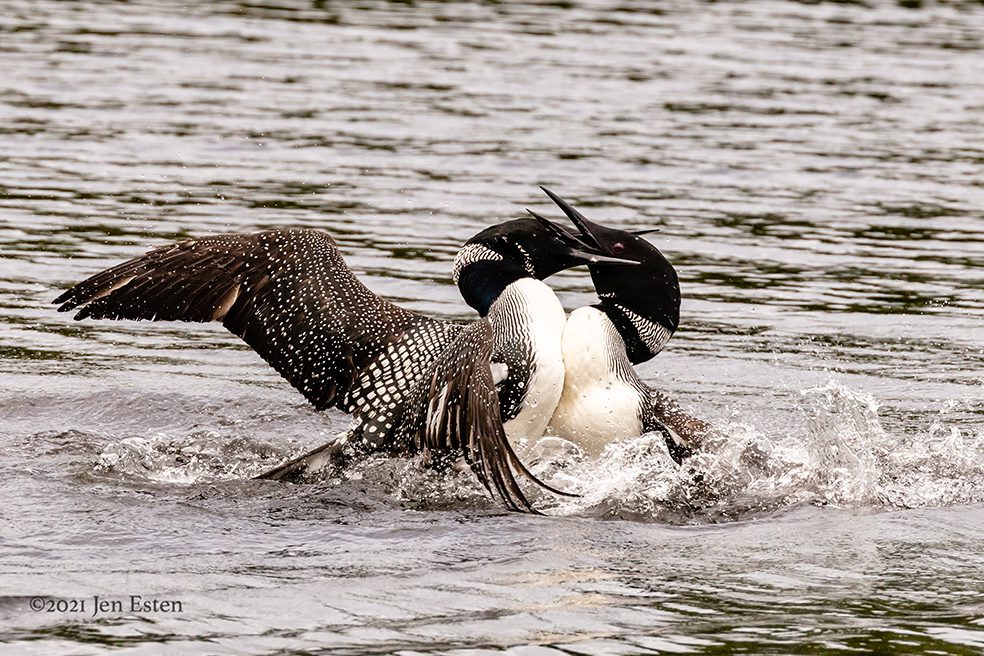 The fight continued for about 5 min with several chases around the nest platform. Then one female chased the other to the shore and from there into the woods. 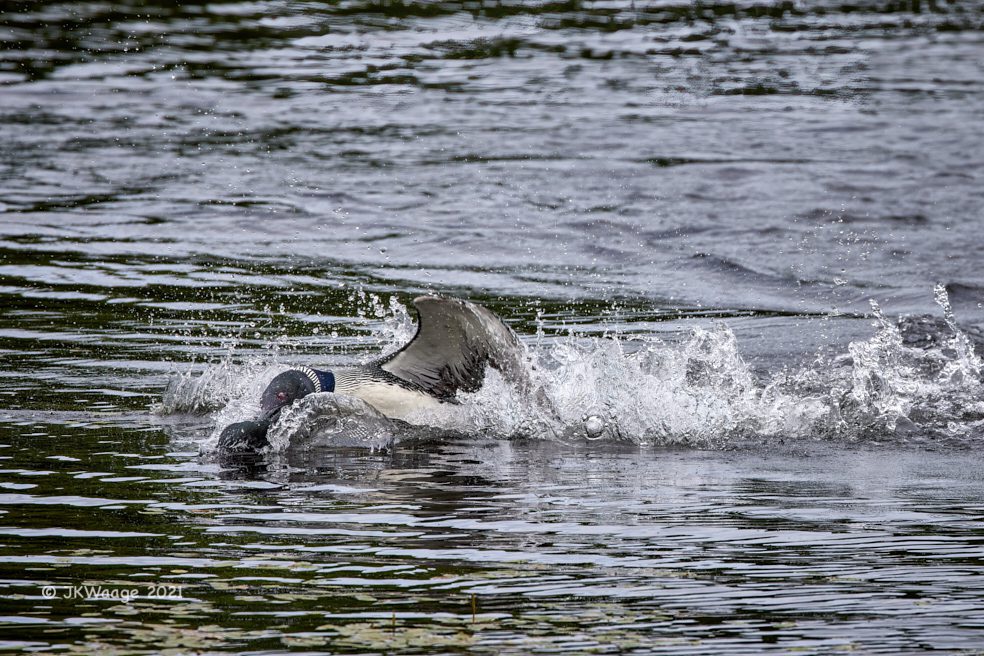 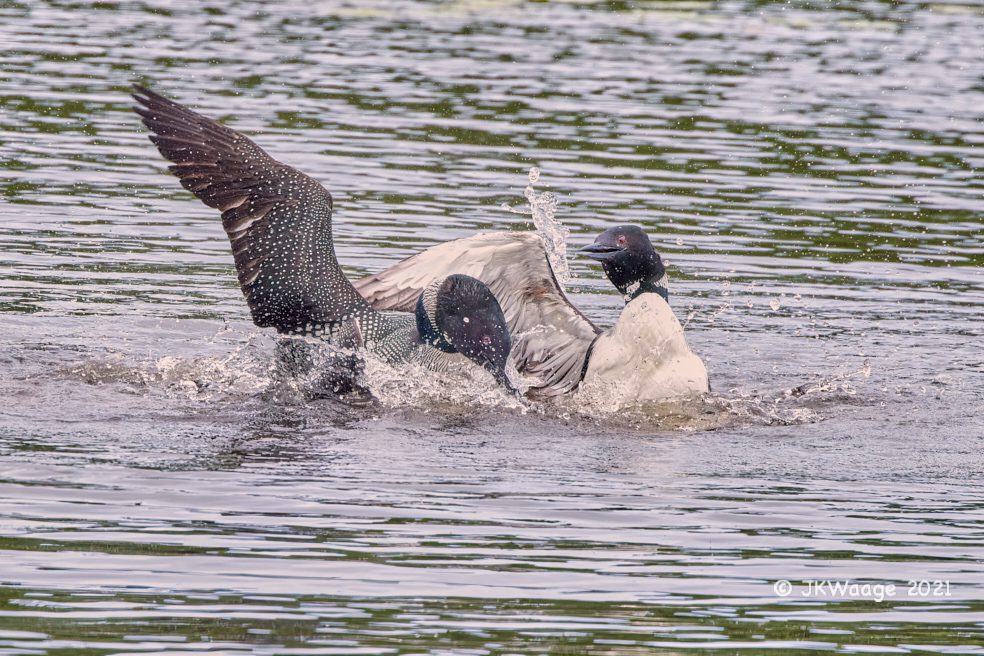 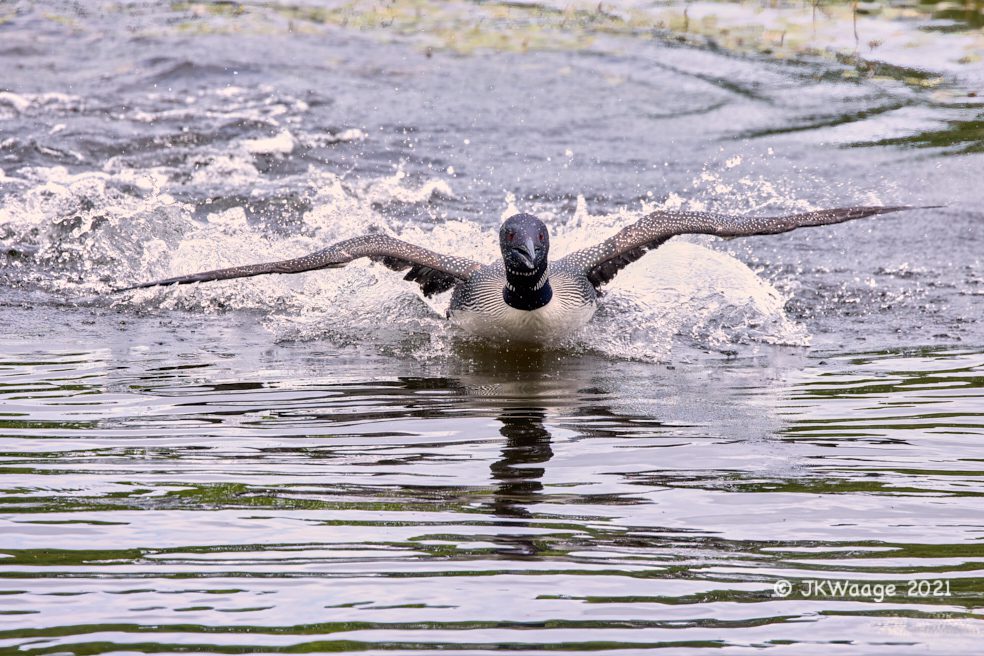 We found them about 25 yards into the woods, still fighting. Below, the old female is on top of the new one, pecking at her head. The new female fled and ended up behind a tree with a wound on her beak that now allows us to readily identify her. The old female returned to the Cove and the new one went the opposite direction through the woods to the Lake. 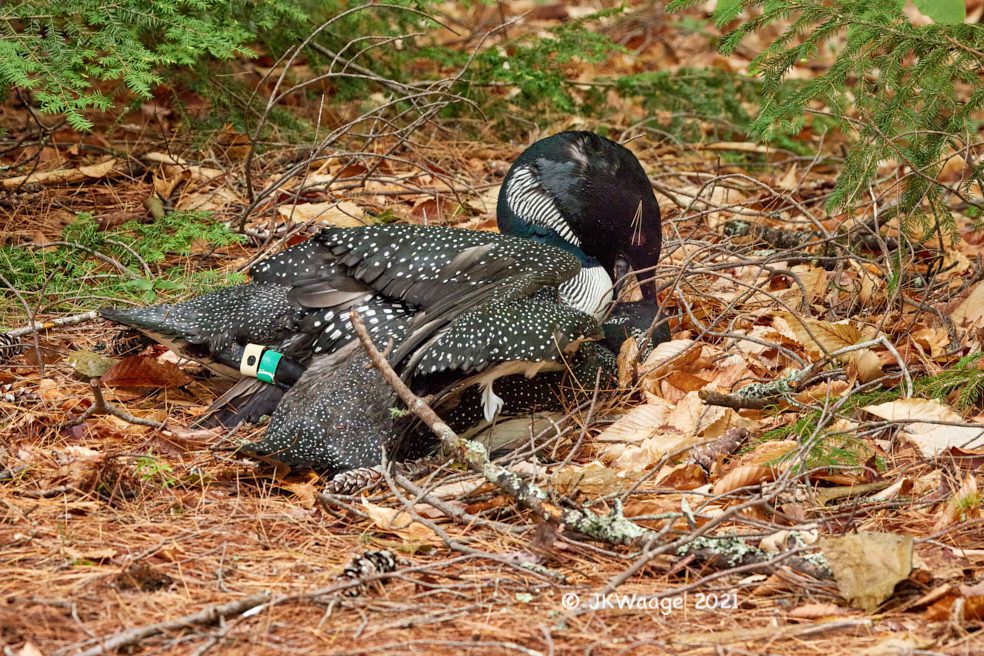 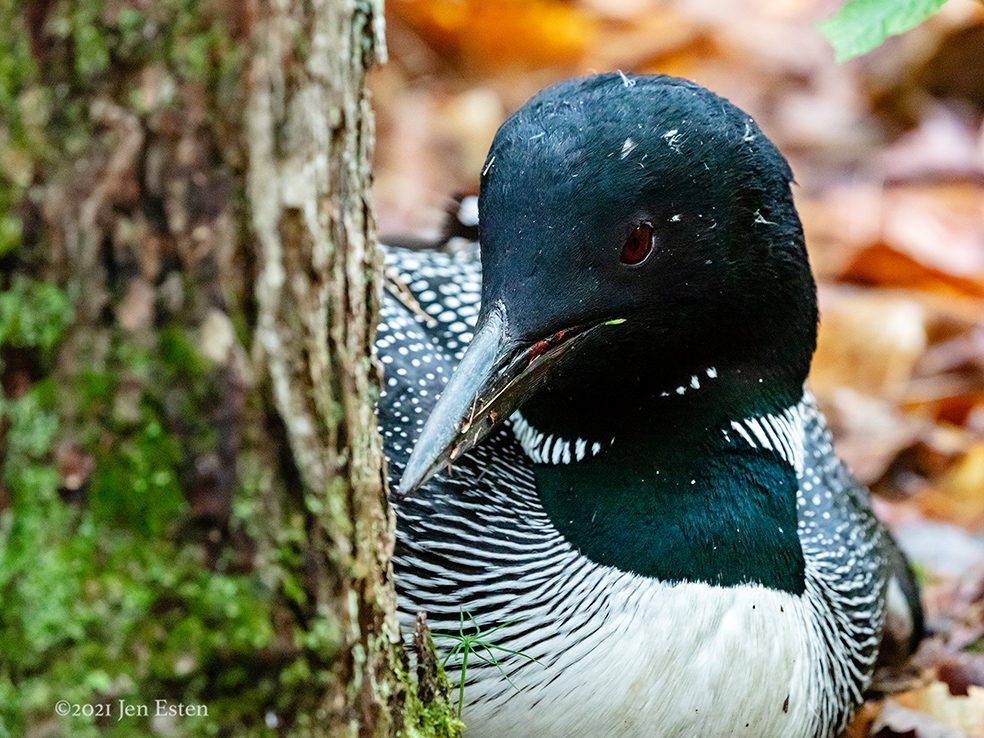 That is a very long crawl for a Loon! Their legs are set way back on the body. That makes them excellent divers but unable to stand and walk. Moving on land means bringing both feet under the body and pushing off with a lunge. 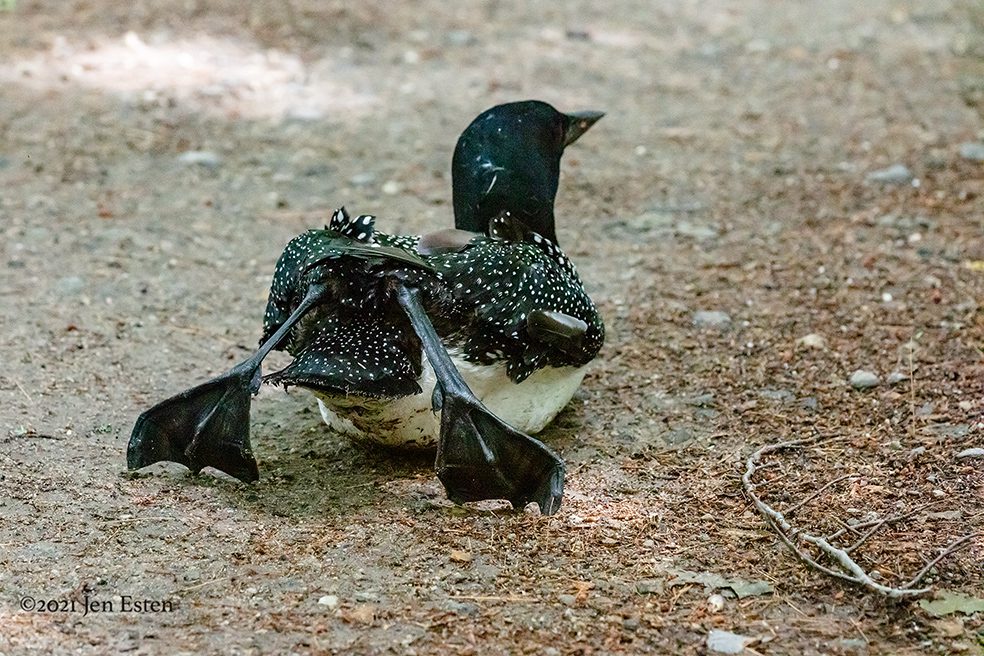 Once back in the Cove the old female cleaned and bridled revealing a wound on the back of her head and more abrasions on her wings. She looked a lot better after a while. The whole interaction took 10 min, but the energy they expended must have been huge. 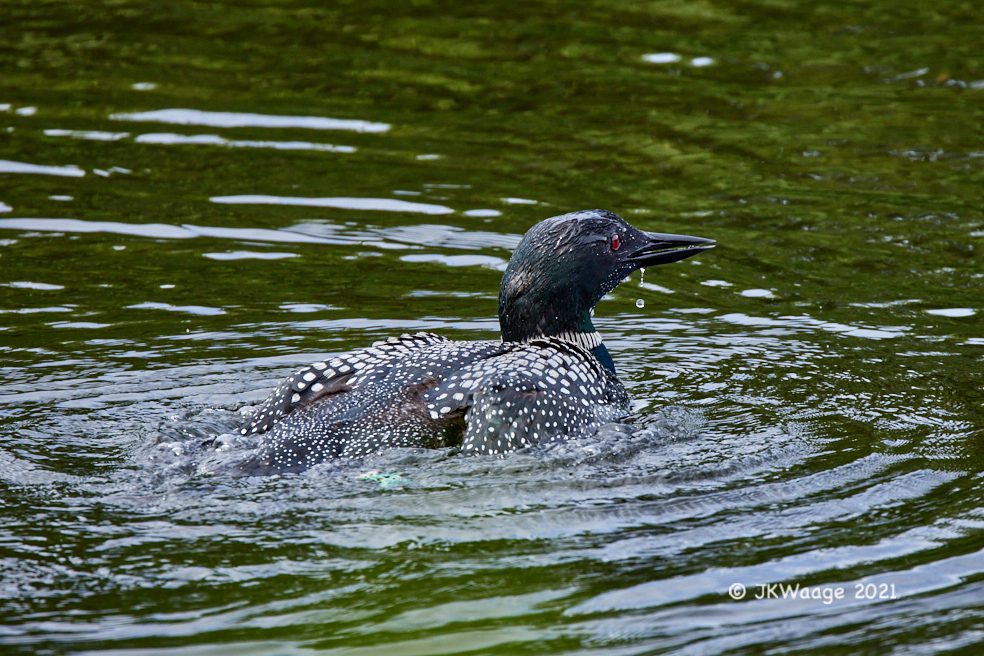 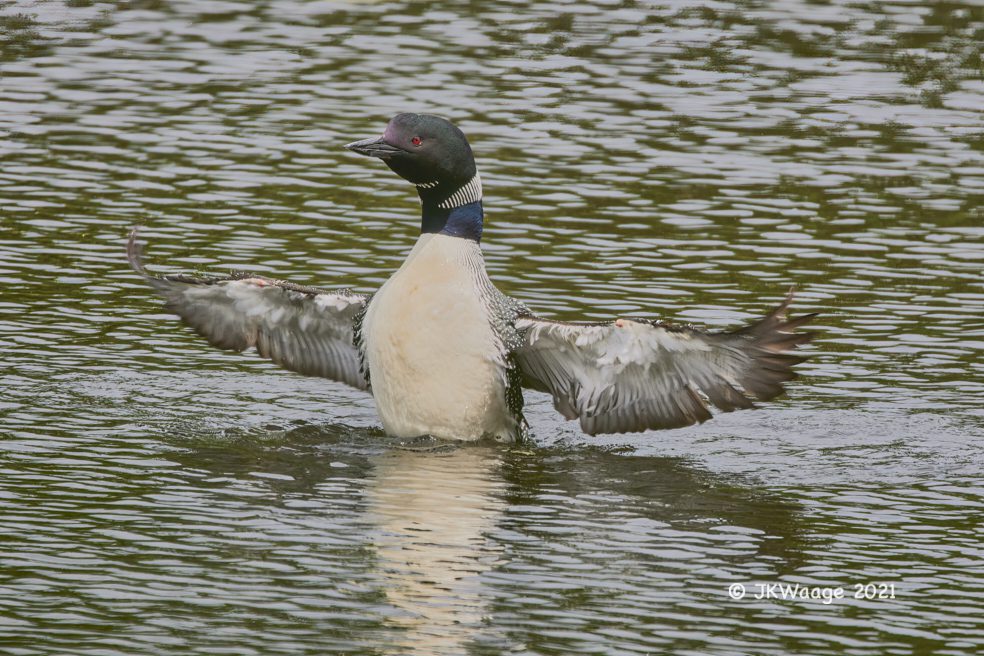 Back in the Cove the old female was a threat to the unattended chick. So was the presence of an adult Bald Eagle that was perched in the Cove most of the day. Fortunately, neither found the chick who was not far from the nest. By evening the male was back and he and Paul spent the night on the nest. It is highly unusual for Loons to return to the nest once chicks are hatched. 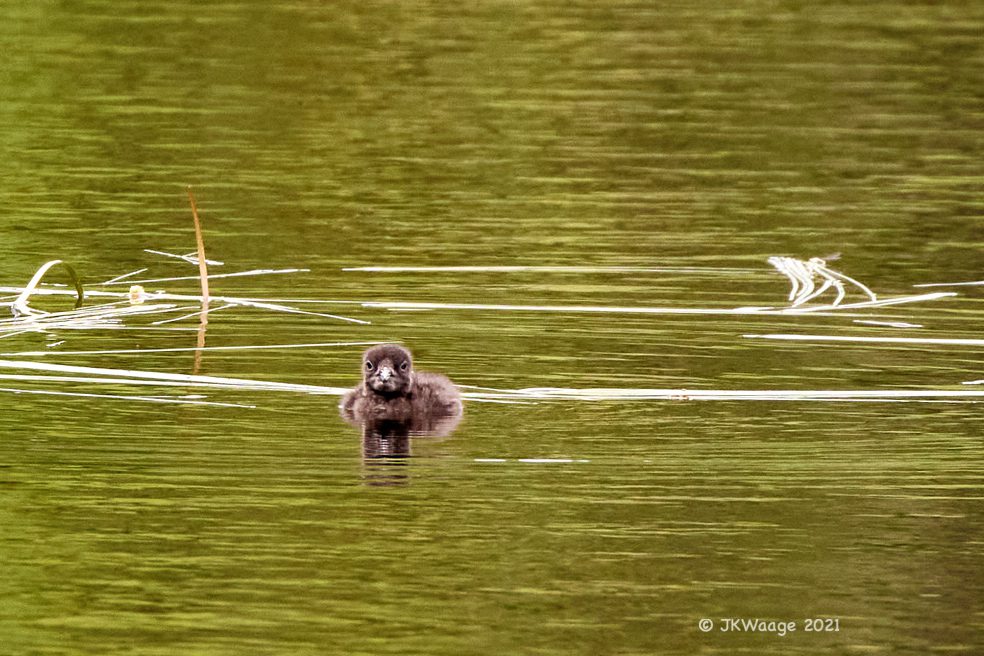 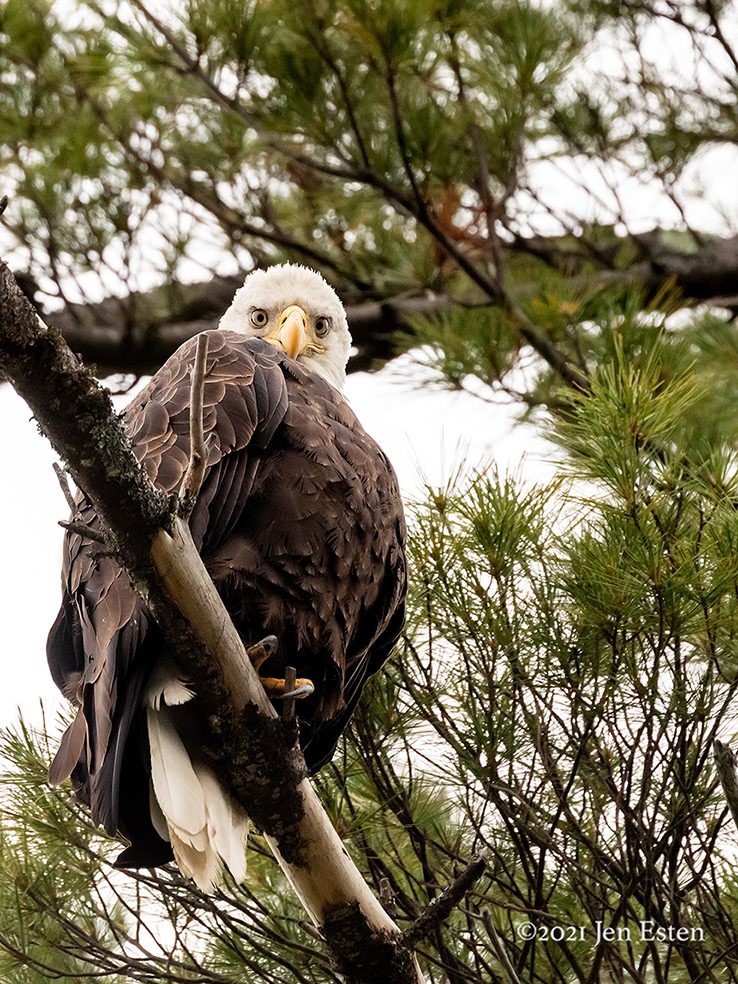 Our last sightings of Paul, below with his father, were on Monday the 5th at noon and again at 6PM. To our knowledge, the chick’s mother never returned to the Cove. We have searched the lake several times and sent out an email asking for help locating the chick, but there has been no sighting of it despite often seeing both parents together, the old female and the fourth loon.

Why is this all happening? With New Hampshire’s success at protecting Loons, the population has increased dramatically since 1975. At the same time good nesting sites on NH lakes are getting scarcer as development continues. That means lots of young loons with much to gain, needing to find mates and territories. Time will tell what happens to our Loons. The male still has his territory, and neither female has given up. As long lived birds, what happens in a single season rarely tells the full story of their lifetime success. We had not expected to even have a chick this year after the initial take-over.

Many factors can play a role in how many chicks a pair produces each year. Our pair has certainly struggled each of the last four years to produce even one chick. Age might be a factor, but they should have many more breeding years. Being close to the southern limit of their range, our Loons may be feeling the early effects of temperature and rainfall change. Food fish populations may be low due to the Lake lowering or other factors. Black flies have been a recurring problem that affects incubation. Certainly the last two years have been difficult with other Loons challenging our pair.