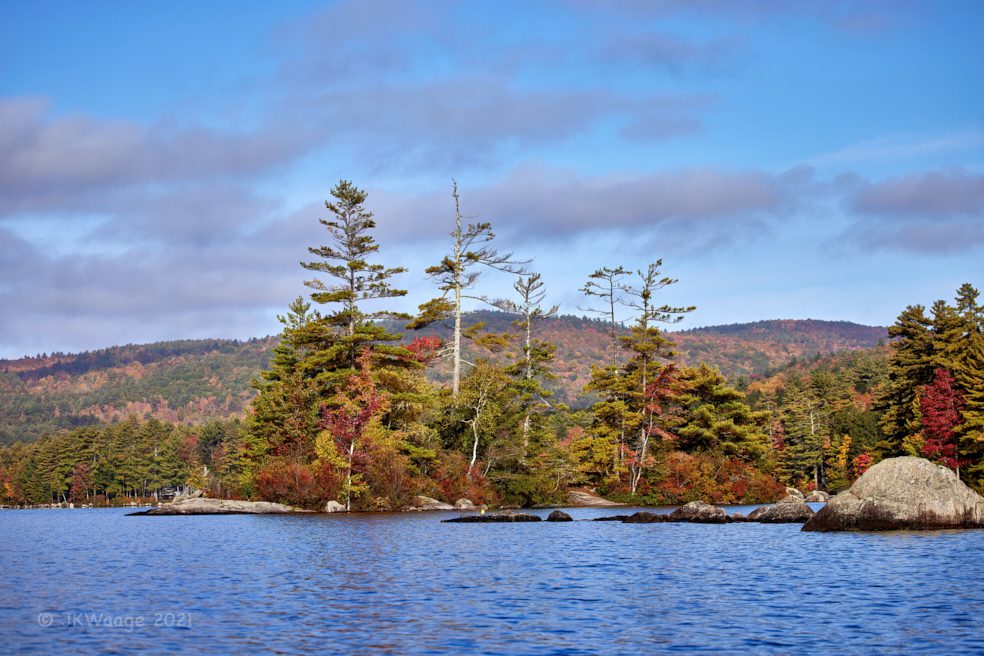 Many animals here are getting ready for winter by storing food. Among them are squirrels and chipmunks. American Red Squirrels (Tamiasciurus hudsonicus) are common here. Their winter diet is mostly the seeds of pine, hemlock and spruce cones which they store in one or more caches near their winter nest. 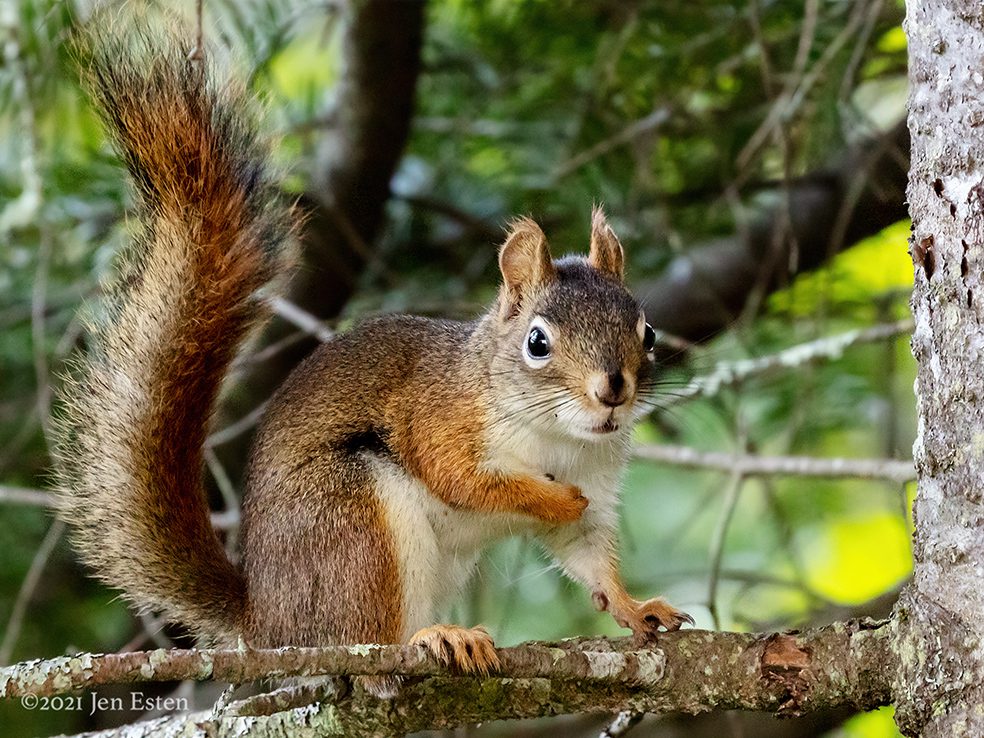 Although they have cheek pouches, most often they will carry a single cone at a time. 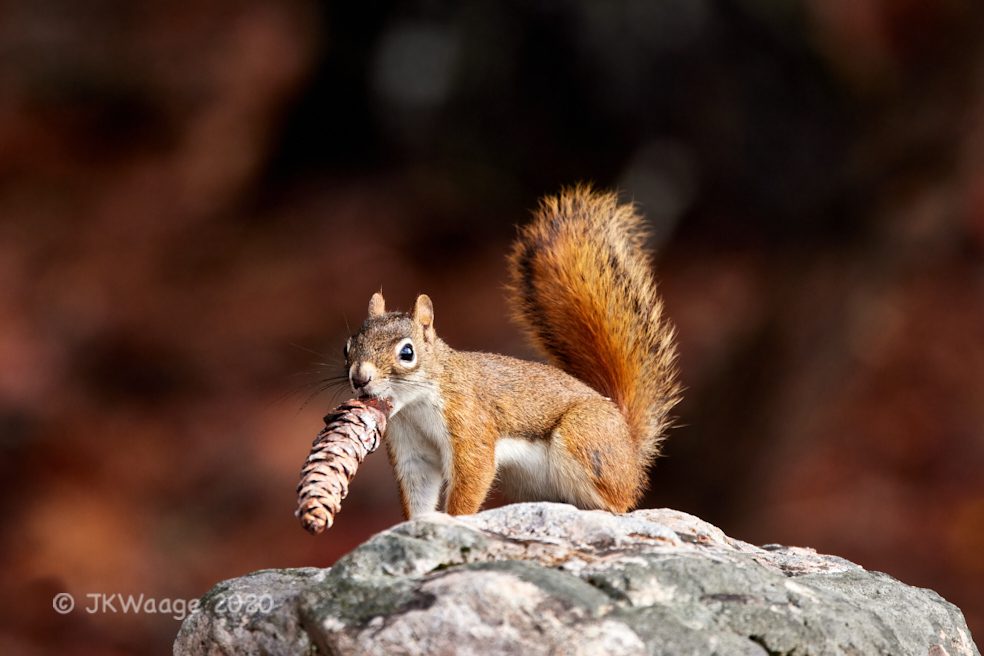 A sign of their activity all year is a pile of eaten cones on a stump (below) or rock where they have pulled off each cone scale to get at the seed at its base. 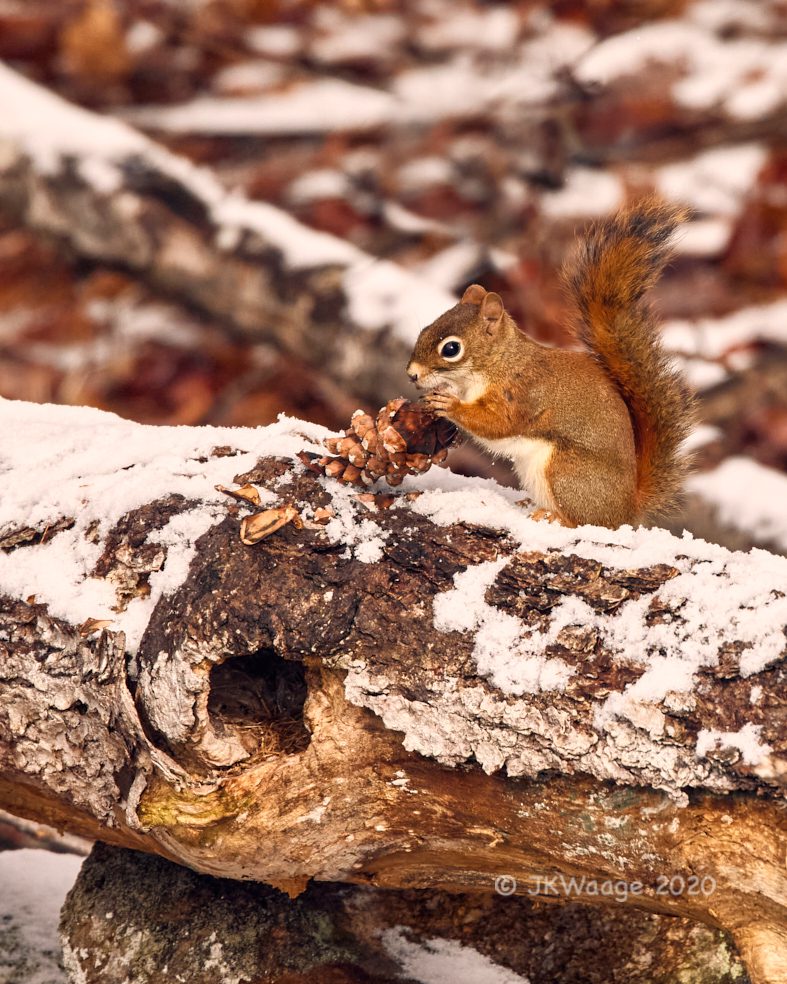 There is another food that Red Squirrels can make in the winter – Maple Syrup! They are known to nibble at Sugar Maple twigs until the sap flows. They will leave it to evaporate in the sun and come back for their Maple Candy later.

Hopefully, by now, you have had at least one prolonged “conversation” with a Red Squirrel explaining to you that you are presently in its territory and might consider moving on.

Have you noticed the tips of oak branches on the ground this time of year? It is not from wind or insect damage. 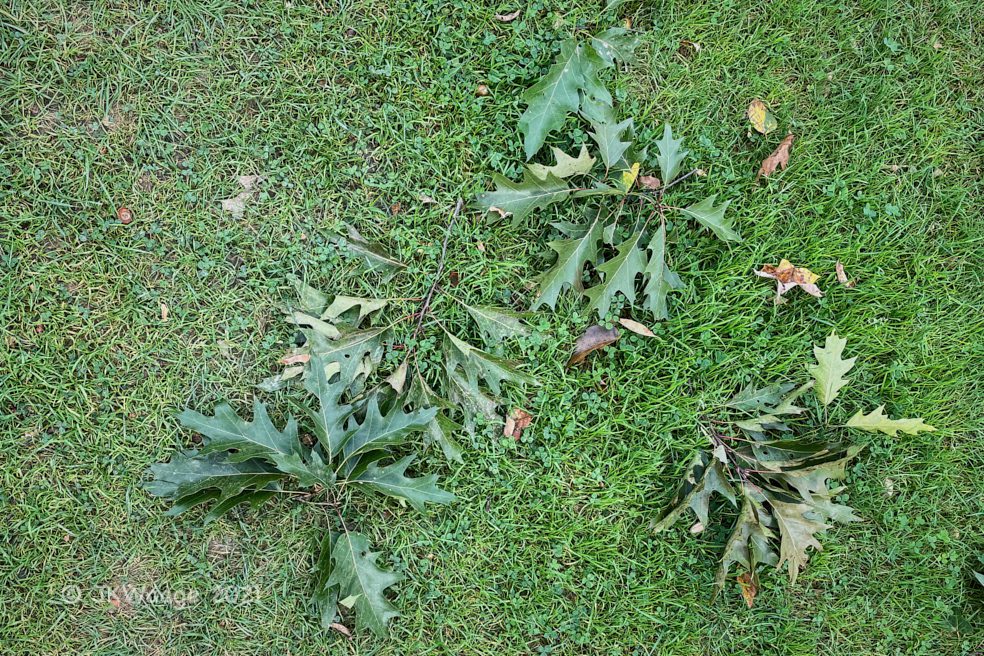 A clue to what is going on is the presence of acorn caps but no acorns (below). Eastern Gray Squirrels (Sciurus carolinensis) are collecting and storing acorns, their main food supply for the winter. They have a short time to get an acorn harvest into the ground. Acorn crops vary from year to year and turkeys, deer, Blue Jays and other species are looking for them too.

By cutting many branches during one foray in an oak, and then harvesting the acorns on the ground, the squirrel is saving a lot of time and energy climbing trees. The missing acorns are not in a central cache like the Red Squirrels have, but are buried fairly close by. Gray Squirrels are “scatter hoarders”, burying their food all around their territory. But how do they find what they buried? 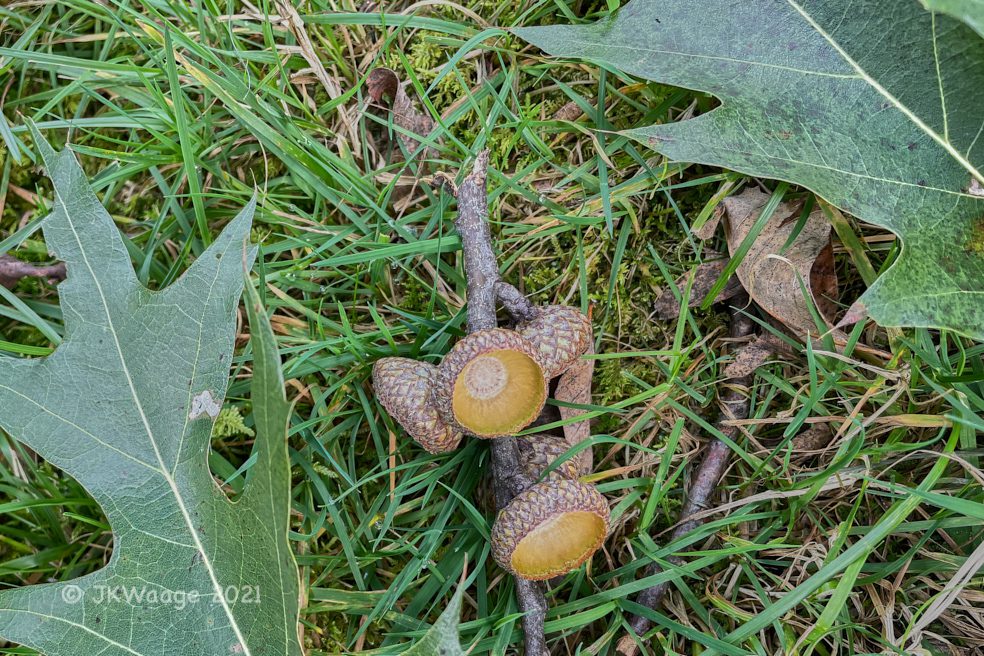 You know from “squirrel proof” bird feeders that Gray Squirrels are pretty smart. Just how “smart” they are at finding buried food has been revealed in a series of clever experiments by UC Berkeley Prof. Lucia Jacobs and her students. It turns out that squirrels don’t find buried food by random searching and smell. Instead they use their excellent spatial memories. They not only know where they buried things, but what kind of food is buried and how soon it needs to be eaten. 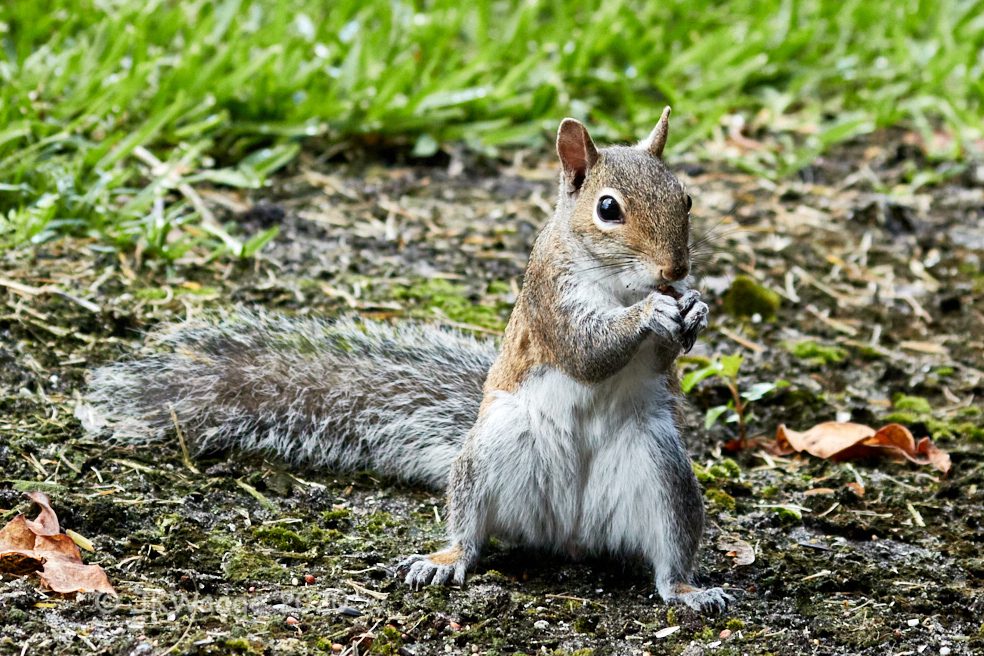 Not only are squirrel brains more complex that we thought, their feet are as well. Gray and Red squirrels belong to a sub-group of squirrels, “Tree Squirrels”. These arboreal squirrels share several adaptations that help them manage tree climbing.  Below you can see how their long fingers and toes and sharp nails allow them to grasp branches. The long tail aids in balance. 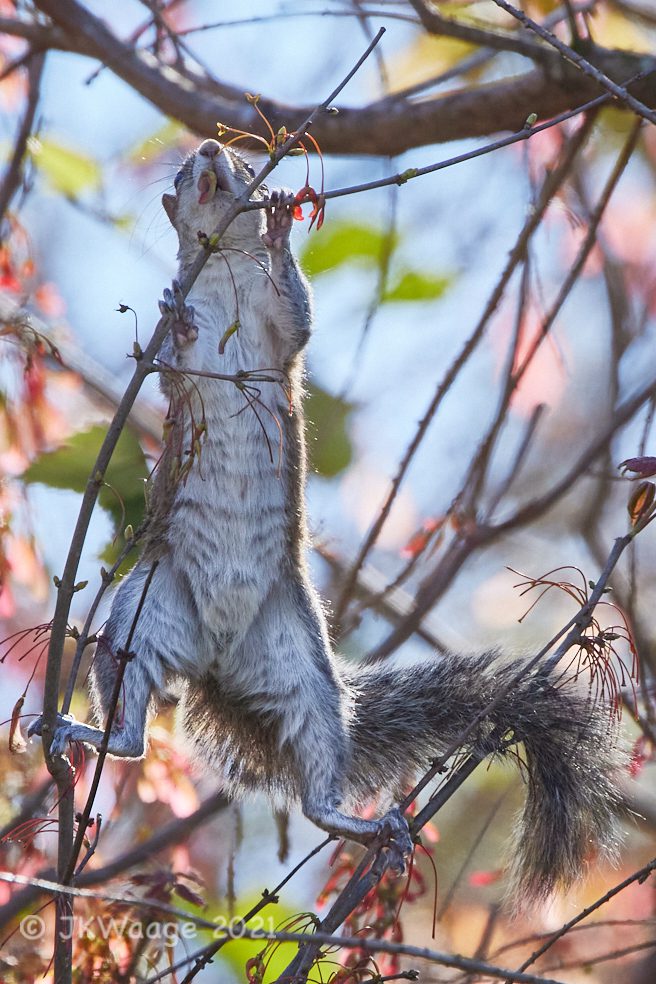 The most amazing tree climbing adaptation may be the one in their ankles. If you have watched squirrels navigate trees (or bird feeders) you probably realized that they not only climb up trees head first, they climb down them head first as well! How? Their ankle joints are not locked into a forward position like ours, but can rotate 180 degrees to face backwards. That allows them to walk down trees using their sharp claws and also to hang from branches, wires, and the top of your bird feeder, while using their front paws to forage. 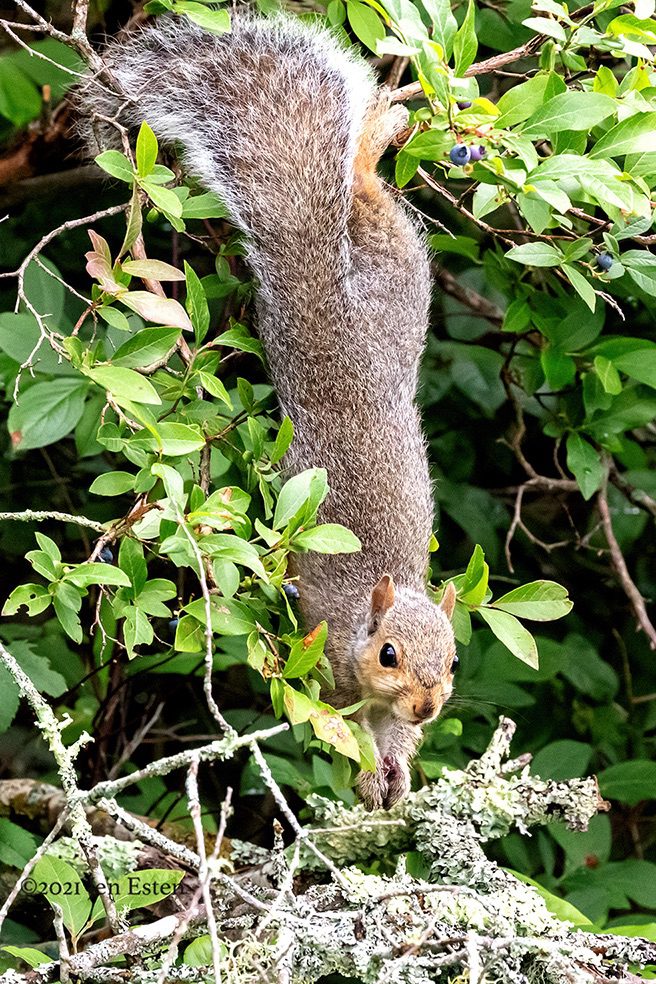 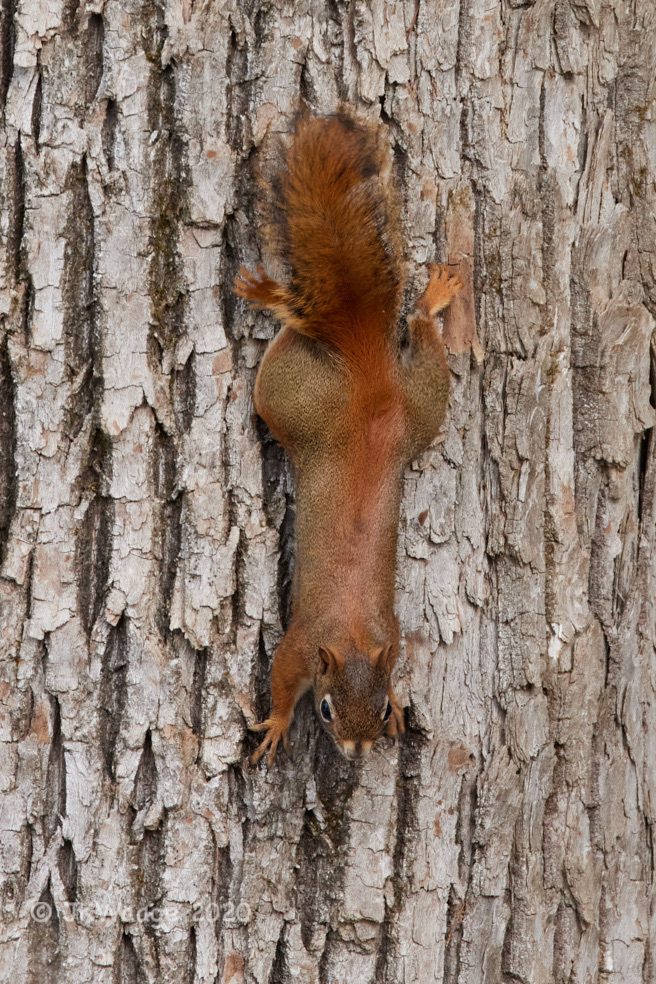 Yes, they are often pests, but a closer look reveals a remarkable set of adaptations, mental and morphological, to appreciate.

Another squirrel that we have a love/hate relationship with is the Chipmunk. They, like tree squirrels, are in the family Sciuridae, along with marmots (including woodchucks), prairie dogs, and ground squirrels. They and stone walls seem made for each other. Like tree squirrels they eat a variety of fruits and nuts and depend on a cache of seeds and nuts for the winter months. 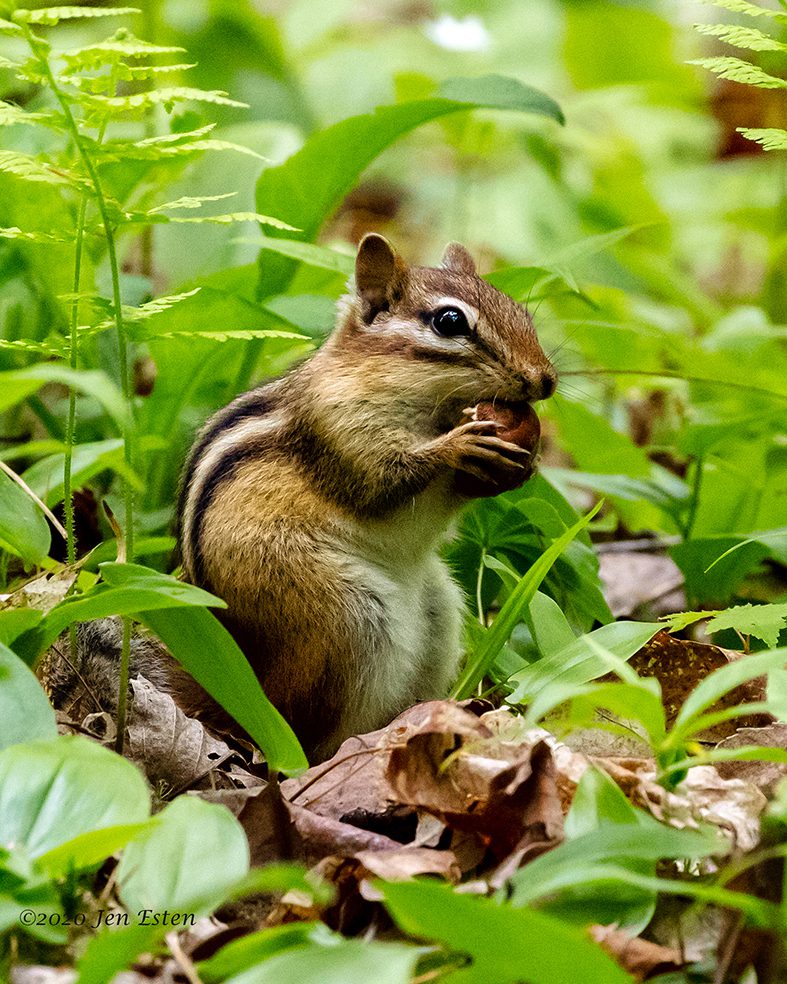 Like Red Squirrels, Chipmunks store nuts in a central cache. Getting them there means lots of trips in the fall, but they have very expandable cheek pouches that help. Carrying a half dozen nuts at once can save time and energy! 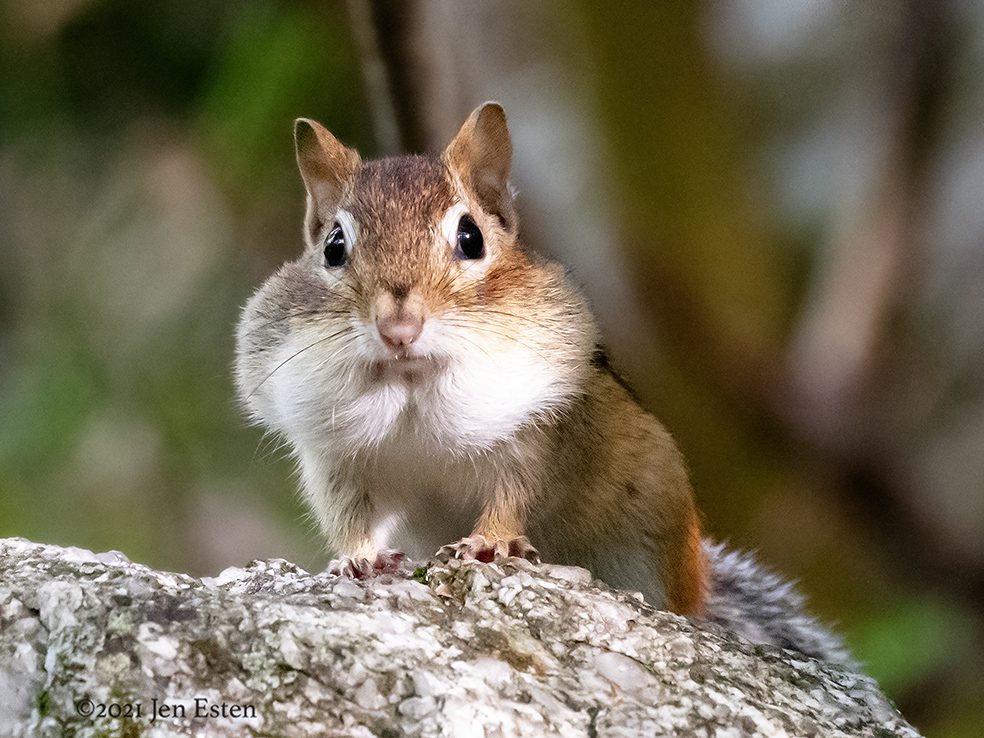 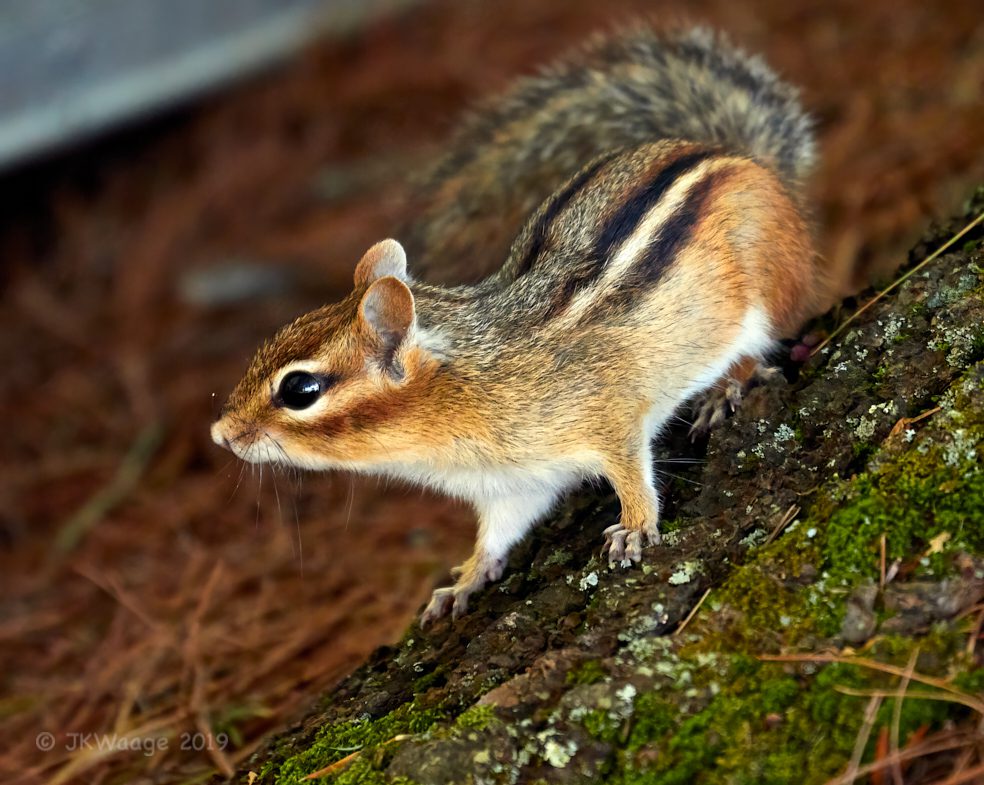 Our male seems to have left the Lake as he usually does in October. Our female is still on the Lake. Here she is just off Kidder Point on Tuesday the 12th, taking a break from fishing. 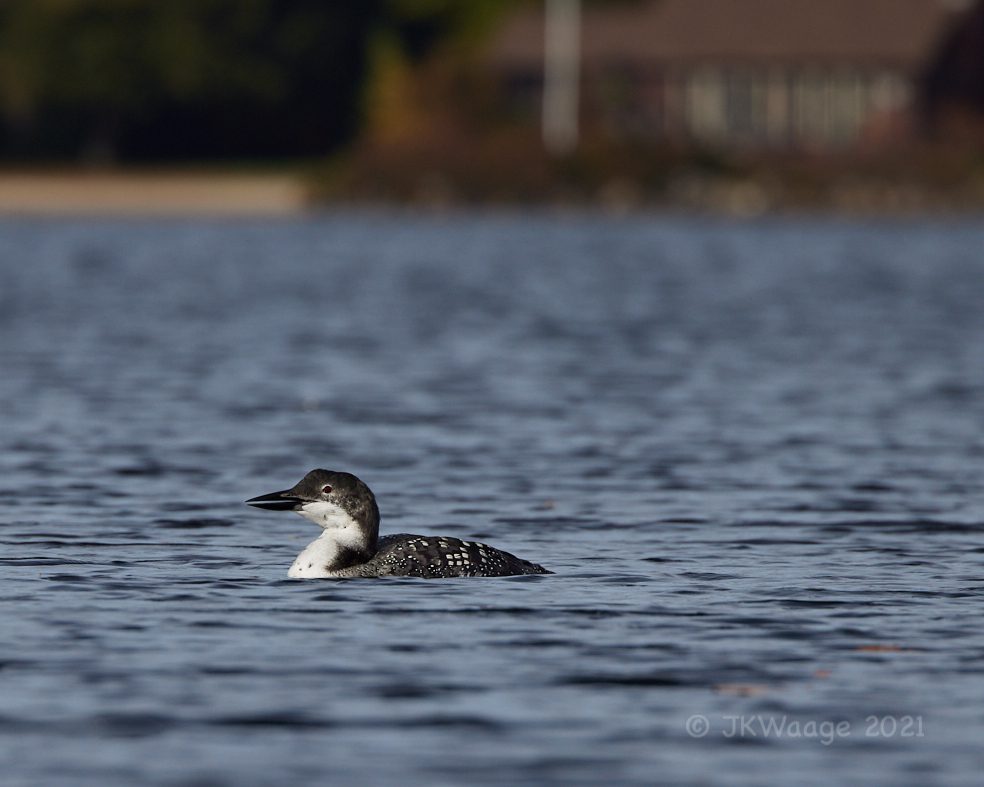 Laying her head on her back reveals that her black necklaces are almost gone. She will lose the distinctive white checkerboard pattern during her final molt into winter plumage. 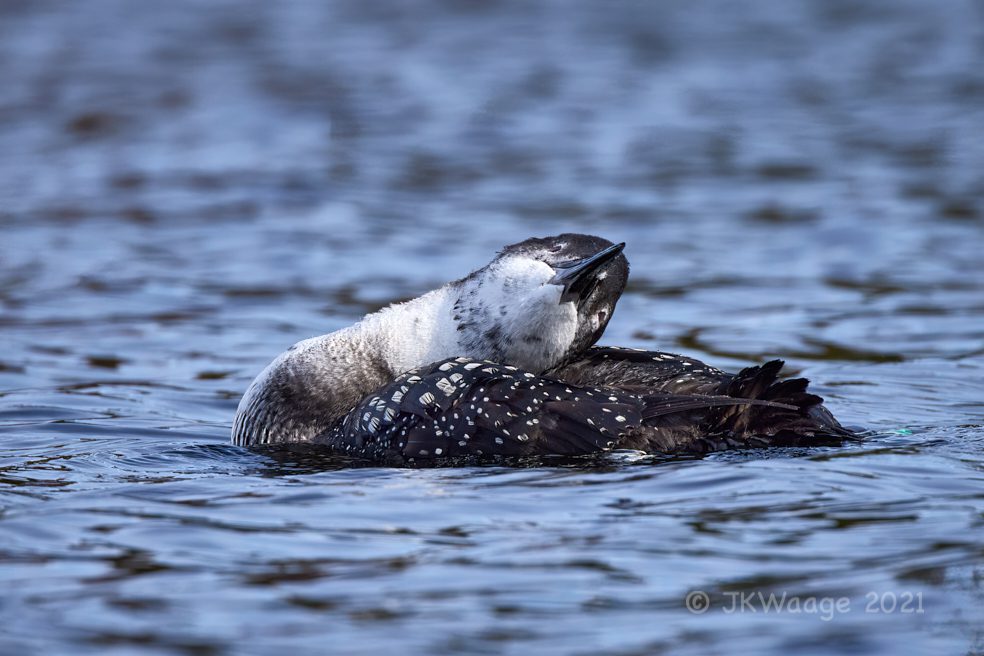 Hopefully she will return next spring and be able to resume the partnership that has given us so many chicks for the past 15 years. 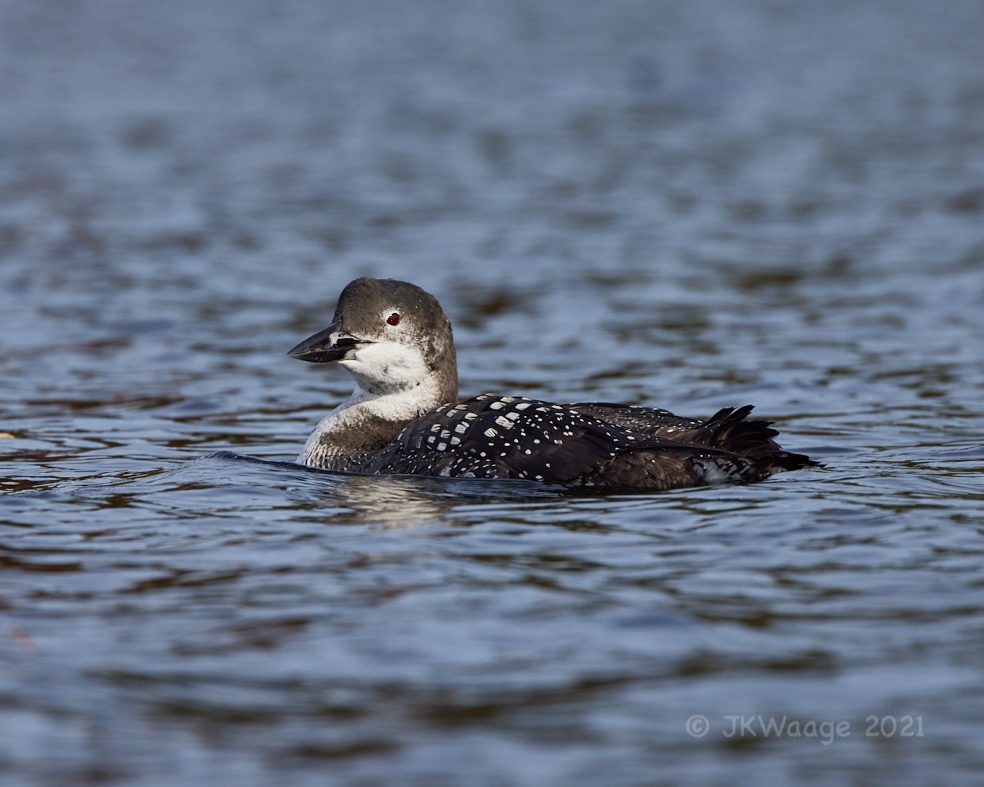 Wednesday we were enjoying an evening paddle when we heard Loon calls like the ‘hoot” made by family members at close range. To our surprise it was our female and an immature Loon, perhaps the one seen a few weeks ago on the Lake with our male. They were fishing together as the sun was going down. A bittersweet reminder of what might have been this summer. 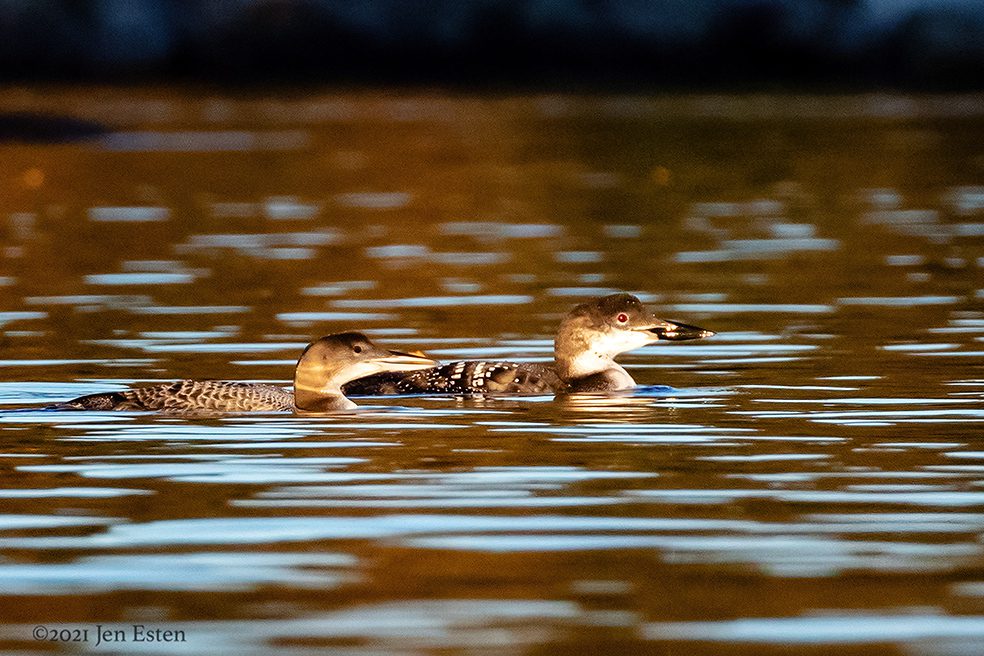 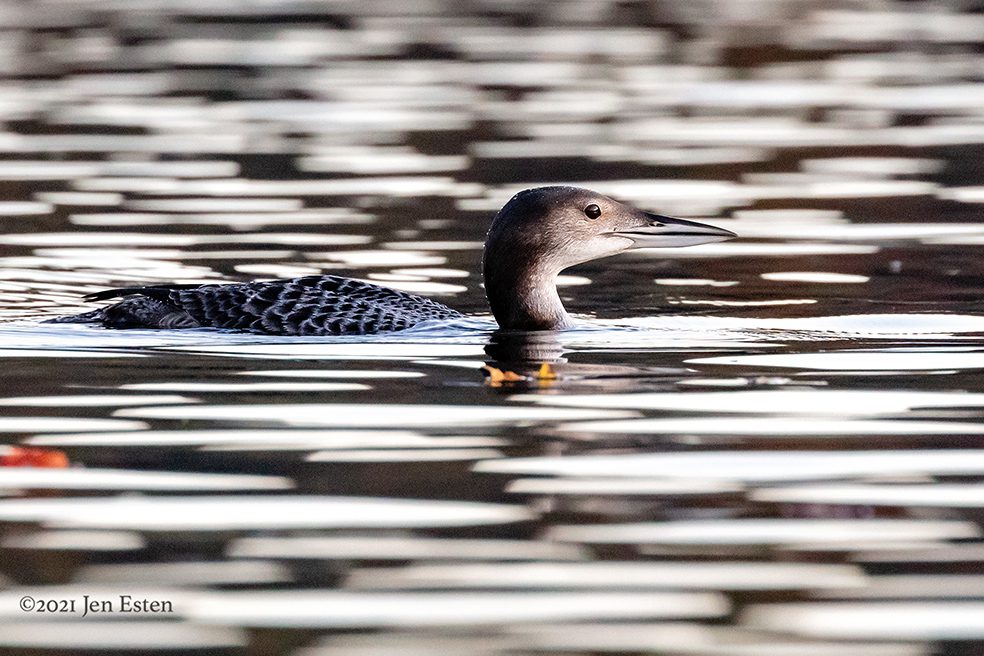 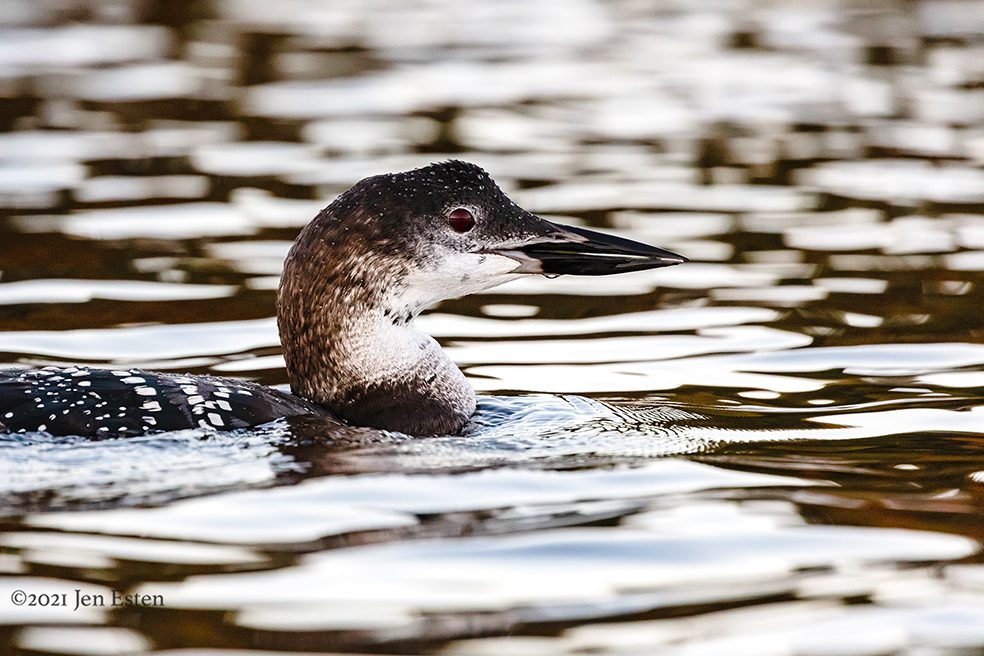 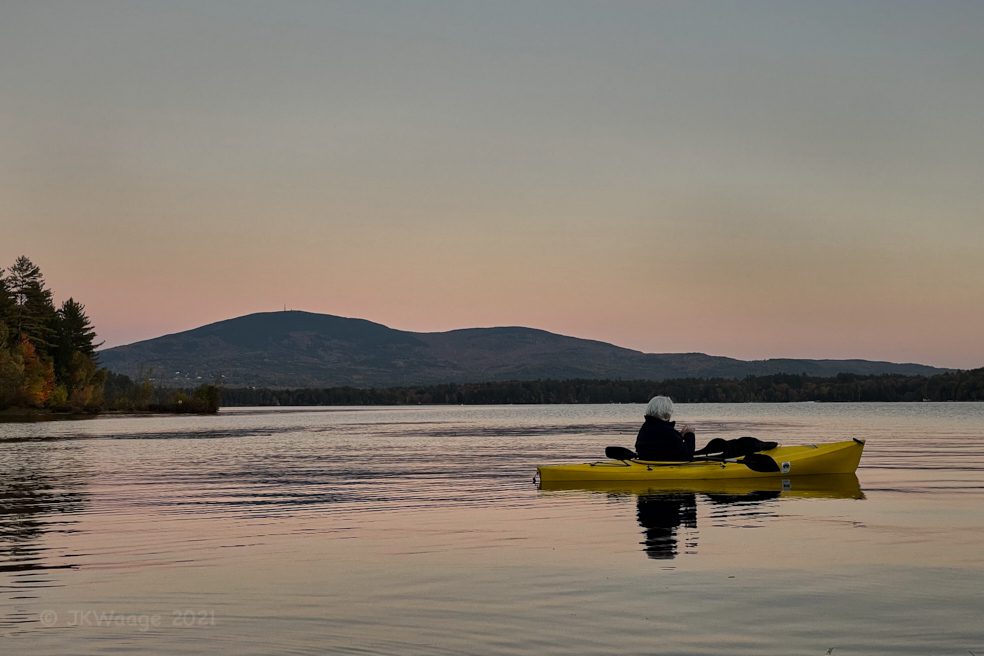